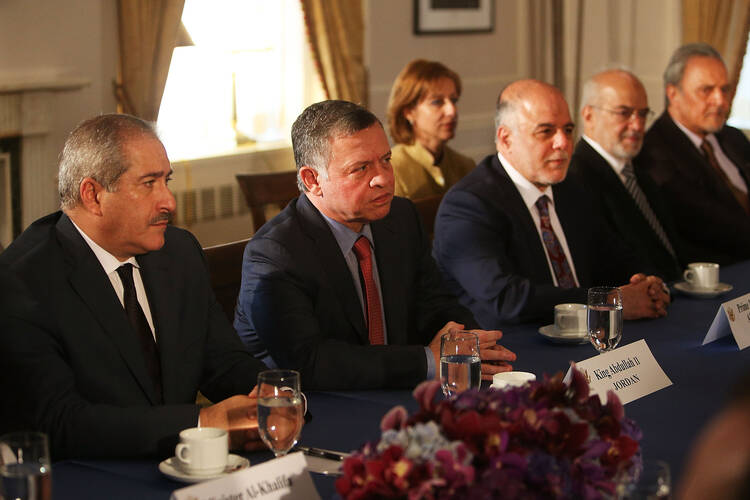 In confronting the quandary of Iraq and Syria, President Obama is tasked with choosing the least worst among a number of awful policy options. The “new” strategy President Obama described in a speech on Sept. 10 and put into action a few weeks later appears painfully similar to the failed policies of the recent past. For over three decades, four presidents have tried to bomb this complex and troubled region into submission. Now the United States and new allies of varying enthusiasm are extending the effort into Syria to suppress the burgeoning threat of the self-described Islamic State.

U.S. and allied forces have struck multiple targets in Syria and Iraq, joined in the desperate defense of the Kurdish city of Kobane near the Turkish border and even engaged a new enemy, the Khorasan Group in Syria. The air assault so far appears thoroughly improvised, raising the worrying possibility of another limitless campaign against terrorism.

The current strategy—opportunistic air attacks accompanied by training and equipping the presumed “moderate” forces within the Syrian resistance—is a recipe for years, if not decades of more suffering for the people of Iraq and Syria. Worse, it is precisely in such environments of bloodshed and chaos that groups like ISIS thrive. Pax Christi in Denmark properly notes that “the costs of setting unclear and moving targets are that violence is compounded while victory remains elusive.”

If returning U.S. troops to Iraq is indeed a nonstarter (as it should be), and if airpower alone is not sufficient to drive back ISIS gains, as military analysts attest, are U.S. and allied forces merely helping confirm the apocalyptic vision of ISIS leadership?

Pope Francis asks for the “unjust aggressor” in the region to be stopped, and American Catholics properly ask if that “stopping” can be accomplished in a manner that protects noncombatants and proposes a reasonable path to an eventual cessation of violence. That latter challenge remains to be addressed.

“Terrorists must be defeated,” said U.N. Secretary General Ban Ki-Moon during the opening of a Security Council summit at the United Nations on Sept. 24, “but we must do so in a way that avoids the deliberate acts of provocation that they set for us—victimization, further radicalization and more civilian deaths…. Over the longer-term, the biggest threat to terrorists is not the power of missiles—it is the politics of inclusion.”

True enough, but how to achieve the secretary’s aim?

This reluctant return to battle over Iraq and now Syria must be different from past campaigns. Use of force must be clearly associated with protecting the vulnerable, and unreasonable care should be paid to preventing noncombatant casualties. More generally, the historical cycle of U.S. indifference and inaction interspersed with periodic detonations of violent intervention must be broken.

Islamic extremism is an idea, not an army. The United States can continue to play whack-a-mole in Yemen, Somalia and within the haphazard territory ISIS has created for itself within the fading borderlines drawn by the Sykes-Picot Agreement, but it can never defeat a state of mind with more missiles. On the contrary, the perception of Western persecution feeds this viral ideology.

The breakdown of political and social order in Iraq and Syria must be understood within a complex of competing tribal, regional, religious and economic interests that at this moment appear intractable. With war-planning commandeering U.S. attention at the Pentagon, are the State Department and Obama administration devoting as much energy and analysis to the campaigns on nonmilitary fronts that could make the essential difference this time?

The battle in the skies over Iraq and Syria can only be one part of a multilateral offensive against terror, one regrettably abetted by squadrons of fighter-bombers, but primarily conducted by politicians pursuing a comprehensive political and economic strategy to contain ISIS, prosecute its agents and buttress Sunni communities in Iraq willing to resist it. That will mean responding to the justified grievances of Iraq’s Sunni minority; defusing the social and cultural forces that drive young people into ISIS-mediated nihilism; and economically isolating this quasi-state and exposing its supporters in Saudi Arabia, Qatar and elsewhere.

It should mean vigorously pursuing a diplomatic offensive in conjunction with renewed military pressure that is willing to include all parties to the conflict, including Syria’s Bashar al-Assad and even representatives from ISIS, if they can be peeled away from the group’s bloody resolve. And no issue, including the redrawing of the tattered Middle Eastern map, Kurdish independence, the disbursement of oil revenue and Sunni provincial autonomy, should be off the table.

The Editors
Show Comments (
1
)
Comments are automatically closed two weeks after an article's initial publication. See our comments policy for more.
John Coppola
7 years 8 months ago
Your commentary is a typically overly complicated and anti-war response to the problem that denies the validity of air strikes and then swings back to seemingly include them amongst other tactics to get rid of the ISIL or ISIS group. How about this? See ISIS as a kind of contemporary NAZISM a fascist quasi religious group that unfortunately will only understand force and complete and catastrophic defeat on the same battlefield that it currently uses to take over towns and villages, airports, oil refineries and the like. Your proposed response will take just as long or longer to resolve the issue and that means letting the group continue to kill, rape, oppress, torture its perceived enemies who are Christians of any sort, ethnic minorities and any and all men, women and children who do not openly prescribe to their radicalized, Medieval, aggressive version of Islam. They carry a flag use military grade weaponry including artillery. My proposed solution: declare war on the group with an act of Congress like we did in the 1940's against the German and Japanese facism of that time and throw everything at them until they are ultimately and comprehensively defeated militarily, financially, and culturally. In the end you will save the lives of thousands if not more innocent men, women and children.