Pope at Santa Marta: Judge Not: 'We are all masters, professors of self-justification.' 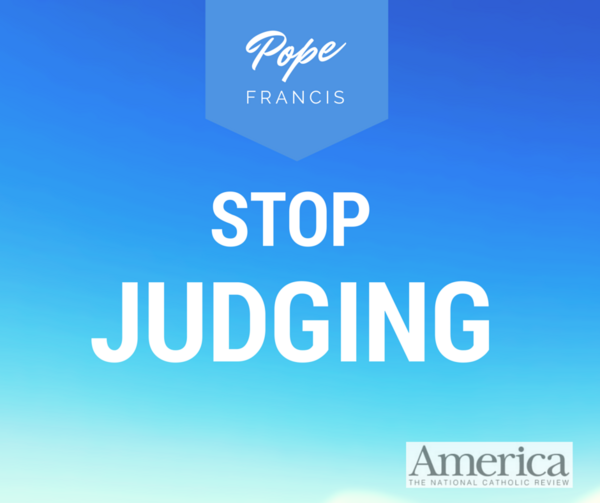 It is easy to judge others, but we can only progress on our Christian journey in life if we are capable of judging ourselves first, said Pope Francis at Monday morning Mass in Casa Santa Marta.

The readings of the day focused on the subject of mercy. The pope, recalling that "we are all sinners"—not "in theory" but in reality—said that the ability to judge oneself is "a Christian virtue, indeed more than a virtue," it is the first step for those who want to be Christian:

“We are all masters, professors of self-justification: ‘No it wasn’t me, it’s not my fault, maybe yes, but not so much…that’s not the way it is…’. We all have an alibi to explain away our shortcomings, our sins, and we are often to put on a face that says "I do not know," a face that says ‘I didn’t do it, maybe someone else did’ an innocent face. This is no way to lead a Christian life.”

"It’s easier to blame others"—observed the Pope—but "something strange happens if we try to behave differently: "If we begin to look at the things we are capable of doing, at first we “feel bad, we feel disgust," yet this in turn "gives us peace and makes us healthy.”

Pope Francis continued, “when I feel envy in my heart and I know that this envy is capable of speaking ill of others and morally assassinating them,” this is “the wisdom of judging oneself.” "If we do not learn this first step in life, we will never, never be able to take other steps on the road of our Christian life, of our spiritual life":

“The first step is to judge ourselves. Without saying anything out loud. Between you and your conscience. Walking down the street, I pass by a prison and say: "Well, they deserve it"—"Yet do you know that if it weren’t for the grace of God you would be there? Did you ever think that you are capable of doing the things that they have done, even worse?” This is what judging yourself means, not hiding from the roots of sin that are in all of us, the many things we are capable of doing, even if we cannot seen them.”

The pope stressed another virtue: shame before God, in a kind of dialogue in which we recognize the shame of our sin and the greatness of God's mercy:

"To You, Lord, our God, mercy and forgiveness. Shame on me and to You mercy and forgiveness." This Lent, it would do us all good to have this dialogue with the Lord: self-accusation. Let us ask for mercy. In the Gospel Jesus is clear: "Be merciful as your Father is merciful." When one learns to accuse oneself first then we are merciful to others: "But, who am I to judge, if I am able to do things that are worse?"

"May the Lord, in this Lent—said the Pontiff—give us the grace to learn to judge ourselves" in the knowledge that we are capable "of the most evil things" and say, "Have mercy on me, Lord, help me to be ashamed and grant me mercy, so I may be merciful to others."

Vatican Radio
Show Comments (
1
)
Comments are automatically closed two weeks after an article's initial publication. See our comments policy for more.
Winni Veils
6 years 1 month ago
I love this. The easiest sin to condemn is the one we are not not tempted by...but Jesus doesn't ask those with stones in their hand if they are without adultery. He asks if they are without sin. We need to look at the whole ugly package of ourselves before we start getting into the judging game. If we truly trust God, we know that he will do the necessary judging and from him there will be both perfect justice and perfect mercy. We can protect ourselves, we can gently teach, but we don't need to do more judging than that.