Christians must be salt and light. How? Pope Francis has a simple answer

Christians must be salt and light. How? Pope Francis has a simple answer 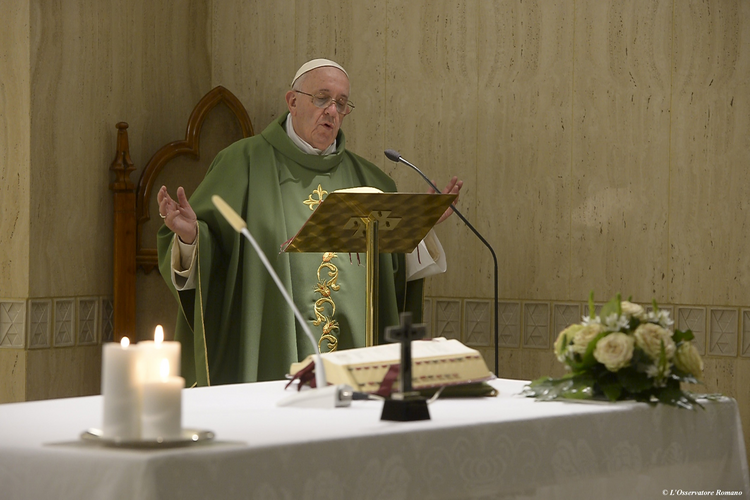 Pope Francis has urged believers to be true Christians and give flavor to the life of others, not to be tempted to shine light upon themselves but to bring the light of faith to their neighbors and to mankind.

The pope was speaking on Tuesday morning during Mass at the Casa Santa Marta.

Drawing inspiration from the Gospel reading of the day, Pope Francis spoke of when Jesus told his disciples “you are the salt of the earth," “you are the light of the world."

Christians, he said, must be salt and light, but never self-serving: salt must add flavor and light must illuminate the other.

The pope continued his homily with the question: “what must a Christian do in order for the salt not to run out, so that the oil to light the lamp does not come to an end?”

The “battery” a Christian uses to generate light, the pope explained, is simply prayer.

“There are many things one can do, many works of charity, many great things for the church—a Catholic University, a college, a hospital—you may even be rewarded as a benefactor of the church with a monument, but if you do not pray, it will be dark and dimly lit,” he said.

Prayer, the pope said, is what lights up Christian life, and he highlighted the fact that prayer is a “serious” matter: “a prayer of adoration to God the Father, a prayer of praise to the Holy Trinity, a prayer of thanksgiving, a prayer to request to God… prayer must come from the heart."

As regards the salt that Christians are called to be: it becomes salt when it is given to others.

Salt is something to be used, not to keep for oneself—Francis elaborated—but to give to others.

“It’s curious,” he continued, “both salt and light are for others, not for oneself: salt does not give flavor to itself; light does not illuminate itself."

Of course, he noted, you may be wondering how long salt and light can last without running out if we continue to give of ourselves relentlessly.

“That’s where the power of God comes in, the pope explained, because the Christian is salt given to us by God during Baptism, it’s a gift that never ends."

And reflecting on the reading from Kings in which Zarephath’s widow trusts the prophet Elijah and thus, her flour and her oil never run out, Pope Francis urged Christians to shine brightly and always overcome the temptation to shine light upon themselves.

And calling it “mirror spirituality” he said “it is a bad thing” to want to shine light onto oneself: “Be light to illuminate, be salt to give flavor and to preserve."

“May your light shine before men, the pope concluded, so that they may see your good works and give glory to your Father who is in Heaven."