Pope in Bolivia: No One Needs to be Discarded 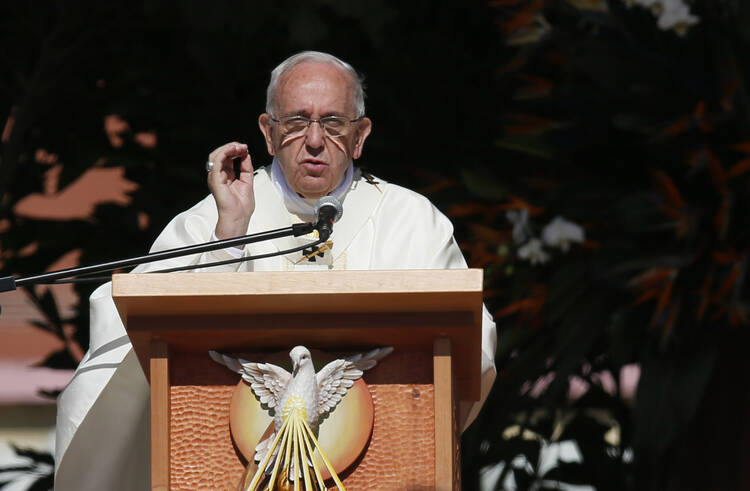 Pope Francis opened the Fifth National Eucharistic Congress in Bolivia with a Votive Mass for the Most Holy Eucharist in the city of Santa Cruz. The Congress will take place in the city of Tarija in the southern part of the country.

In his homily, Pope Francis said those who had come to the Mass were like the people who had come out into the desert to listen to Jesus. “Frequently, we tire of this journey,” the Pope said. “Frequently we lack the strength to keep hope alive.” When our hearts lack hope, and fall into despair, we can fall into a kind of materialistic thinking “in which everything has a price, everything can be bought, everything is negotiable.” This way of thinking, he said, “has room only for a select few, while it discards all those who are ‘unproductive,’ unsuitable or unworthy, since clearly those people don’t ‘add up’.”

Pope Francis noted that the Eucharistic Congress has for its theme “Bread Broken for the Life of the World.” The Eucharist, he said, “is a sacrament of communion, which draws us out of our individualism in order to live together as disciples.” The Church continually makes remembrance of the mystery of the Eucharist, which is a sharing in the life of Christ. This sharing in Christ’s life means “we are not isolated individuals, separated from one another, but rather a people of remembrance, a remembrance ever renewed and ever shared with others.”

Below please find the full text of Pope Francis’ prepared homily for the Votive Mass of the Most Holy Eucharist, celebrated in Santa Cruz de la Sierra, Bolivia:

We have come from a variety of places, areas and villages, to celebrate the living presence of God among us. We have travelled from our homes and communities to be together as God’s holy People. The cross and the mission image remind us of all those communities which were born of the name of Jesus in these lands. We are their heirs.

The Gospel which we just heard speaks of a situation much like our own. Like those four thousand people who gathered to hear Jesus, we too want to listen to his words and to receive his life. Like them, we are in the presence of the Master, the Bread of Life.

Back then, many mothers could be seen carrying their children on their shoulders. Like so many of you here! Carrying them, you bring your lives, the future of your people. You bring all your joys and hopes. You bring the blessing of the earth and all its fruits. You bring the work of your hands, hands which work today in order to weave tomorrow’s hopes and dreams. But those people’s shoulders were also weighed down by bitter disappointments and sorrows, scarred by experiences of injustice and of justice denied. They bore on their shoulders all the joy and pain of their land. You too bear the memory of your own people. Because every people has a memory, a memory which is passed on from generation to generation, a memory which continues to move forward.

Frequently we tire of this journey. Frequently we lack the strength to keep hope alive. How often have we experienced situations which dull our memory, weaken our hope and make us lose our reason for rejoicing! And then a kind of sadness takes over. We think only of ourselves, we forget that we are a people which is loved, a chosen people. And the loss of that memory disorients us, it closes our heart to others, and especially to the poor.

We may feel the way the disciples did, when they saw the crowds of people gathered there. They begged Jesus to send them away, since it was impossible to provide food for so many people. Faced with so many kinds of hunger in our world, we can say to ourselves: “Things don’t add up; we will never manage, there is nothing to be done”. And so our hearts yield to despair.

A despairing heart finds it easy to succumb to a way of thinking which is becoming ever more widespread in our world. It is a mentality in which everything has a price, everything can be bought, everything is negotiable. This way of thinking has room only for a select few, while it discards all those who are “unproductive”, unsuitable or unworthy, since clearly those people don’t “add up”. But Jesus once more turns to us and says: “They don’t need to go away; you yourselves, give them something to eat”.

Those words of Jesus have a particular resonance for us today: No one needs to go away, no one has to be discarded; you yourselves, give them something to eat. Jesus speaks these words to us, here in this square. Yes, no one has to be discarded; you, give them something to eat. Jesus’ way of seeing things leaves no room for the mentality which would cut bait on the weak and those most in need. Taking the lead, he gives us his own example, he shows us the way forward. What he does can be summed up in three words. He takes a little bread and some fish, he blesses them and then gives them to his disciples to share with the crowd. This is how the miracle takes place. It is not magic or sorcery. With these three gestures, Jesus is able to turn a mentality which discards others into a mindset of communion and community. I would like briefly to look at each of these actions.

Taking. This is the starting-point: Jesus takes his own and their lives very seriously. He looks at them in the eye, and he knows what they are experiencing, what they are feeling. He sees in those eyes all that is present in the memory and the hearts of his people. He looks at it, he ponders it. He thinks of all the good which they can do, all the good upon which they can build. But he is not so much concerned about material objects, cultural treasures or lofty ideas. He is concerned with people. The greatest wealth of a society is measured by the lives of its people, it is gauged by its elderly, who pass on their knowledge and the memory of their people to the young. Jesus never detracts from the dignity of anyone, no matter how little they possess or seem capable of contributing.

Blessing. Jesus takes what is given him and blesses his heavenly Father. He knows that everything is God’s gift. So he does not treat things as “objects”, but as part of a life which is the fruit of God’s merciful love. He values them. He goes beyond mere appearances, and in this gesture of blessing and praise he asks the Father for the gift of the Holy Spirit. Blessing has this double aspect: thanksgiving and transformative power. It is a recognition that life is always a gift which, when placed in the hands of God, starts to multiply. Our Father never abandons us; he makes everything multiply.

Giving. With Jesus, there can be no “taking” which is not a “blessing”, and no blessing which is not also a “giving”. Blessing is always mission, its purpose is to share what we ourselves have received. For it is only in giving, in sharing, that we find the source of our joy and come to experience salvation. Giving makes it possible to refresh the memory of God’s holy people, called and sent forth to bring the joy of salvation to others. The hands which Jesus lifts to bless God in heaven are the same hands which gave bread to the hungry crowd. We can imagine how those people passed the loaves of bread and the fish from hand to hand, until they came to those farthest away. Jesus generated a kind of electrical current among his followers, as they shared what they had, made it a gift for others, and so ate their fill. Unbelievably, there were even leftovers: enough to fill seven baskets. A memory which is taken, blessed and given always satisfies people’s hunger.

The Eucharist is “bread broken for the life of the world”. That is the theme of the Fifth Eucharistic Congress to be held in Tarija, which today we inaugurate. The Eucharist is a sacrament of communion, which draws us out of our individualism in order to live together as disciples. It gives us the certainty that all that we have, all that we are, if it is taken, blessed and given, can, by God’s power, by the power of his love, become bread of life for all.

The Church is a community of remembrance. Hence, in fidelity to the Lord’s command, she never ceases to say: “Do this in remembrance of me” (Lk 22:19). Generation after generation, throughout the world, she celebrates the mystery of the Bread of Life. She makes it present and she gives it to us. Jesus asks us to share in his life, and through us he allows this gift to multiply in our world. We are not isolated individuals, separated from one another, but rather a people of remembrance, a remembrance ever renewed and ever shared with others.

A life of remembrance needs others. It demands exchange, encounter and a genuine solidarity capable of entering into the mindset of taking, blessing and giving. It demands the logic of love.

Mary, like many of you, bore in her heart the memory of her people. She pondered the life of her Son. She personally experienced God’s grandeur and joyfully proclaimed that he “fills the hungry with good things” (Lk 1:53). Today may Mary be our model. Like her, may we trust in the goodness of the Lord, who does great things with the lowliness of his servants.