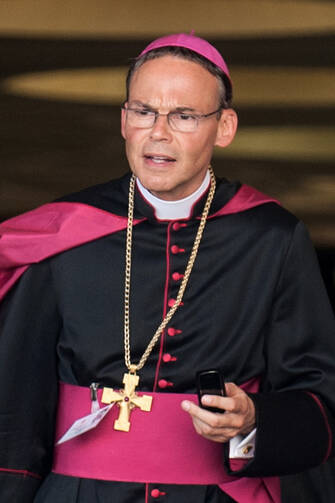 Pope Francis has authorized a leave of absence for a German bishop at the center of controversy over expenditures for his residence and diocesan center.

"A situation has been created in which Bishop Franz-Peter Tebartz-van Elst currently cannot exercise his episcopal ministry," said a statement Oct. 23 from the Vatican press office.

Pope Francis, after being "continually, broadly and objectively informed" about the situation in the Diocese of Limburg, has authorized "a period of leave outside the diocese," effective immediately, the statement said.

A priest whom Bishop Tebartz-van Elst had selected as his vicar general will administer the diocese in his absence, the Vatican said.

The bishop has been at the center of controversy for months over the remodeling and building project in Limburg, which is estimated to have cost about $40 million. German media have dubbed Bishop Tebartz-van Elst the "luxury bishop."

Pope Francis discussed the situation Oct. 17 with Archbishop Robert Zollitsch, president of the German bishops' conference, and with Bishop Tebartz-van Elst himself Oct. 21.

In early September, Cardinal Marc Ouellet, prefect of the Congregation for Bishops, sent retired Cardinal Giovanni Lajolo to visit the diocese to promote peace between the bishop and some of the diocese's priests concerned about the project.

After the cardinal's visit, the bishop agreed to publish figures about the construction project and cooperate with a commission established by the bishops' conference to audit the project and examine how decisions were made. In most cases, church law requires consultation with a diocesan finance council before large sums of diocesan money can be spent.

The Vatican said Oct. 23 that Bishop Tebartz-van Elst would remain outside the diocese until the results of the audit and "the connected verification of responsibility in the matter" were known.

Catholic News Service
Show Comments (
2
)
Comments are automatically closed two weeks after an article's initial publication. See our comments policy for more.
John Barbieri
8 years 9 months ago
This strikes me as a fair first step. The bishop's conduct needs to be thoroughly investigated. If he is innocent, he should be returned to his diocese. If he has acted incompetently, or dishonestly, or abusively, then he needs to be dismissed. Let right be done.
John Barbieri
8 years 9 months ago
May this matter be thoroughly and honestly investigated. Then, let right be done.