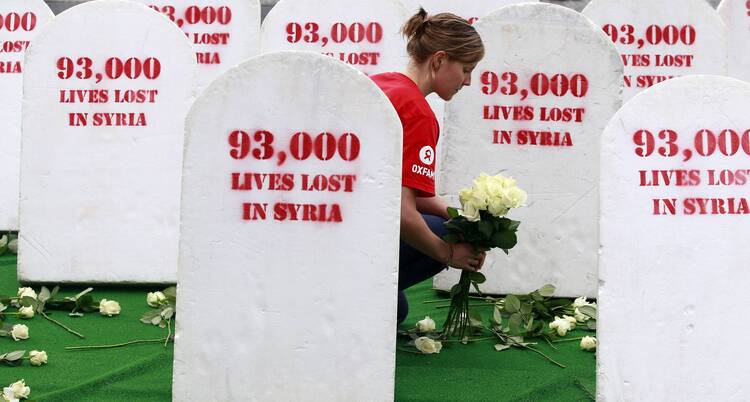 As the death toll nears 100,000 in Syria and millions flee their homes, there seems to be no clear path to peace in the ongoing civil war there. Most commentators agree that any proposal about how to slow or stop the violence in Syria can be little more than a “least worst” option, with little guarantee of success.

The Obama administration, rightly, has been wary of entering the fray militarily. Last month, however, a U.S. intelligence review expressed “high confidence” that the Assad regime had used chemical weapons against opposition forces several times in the past year—crossing the “red line” President Obama identified nearly a year ago. Mr. Obama responded by agreeing to send small arms and ammunition to opposition forces, hoping it would buy time and provide leverage to bring about a negotiated settlement.

The American public, with the justifications offered for the war in Iraq still fresh in memory, should demand clear evidence not only that chemical weapons were used, but by whom. Not everyone is convinced that U.S. intelligence is getting it right this time around. In May a United Nations investigator claimed it was the rebels, not the government, that had used sarin gas. Ban Ki-moon, the U.N. secretary general, continues to call for increased access in Syria in order to conduct a “credible and comprehensive inquiry” into the matter.

What moral resources are available for Catholics to discern the best path forward in this difficult and complex situation? When a government fails to protect its citizens, or worse, perpetrates war crimes, the international community has a responsibility to intervene. This emerging principle in international affairs is known as the responsibility to protect. The intervention, however, need not involve military action. In fact, the Catholic tradition stresses a presumption against using violent force. Before relying on military action, legitimate authorities must search out and try all reasonable nonviolent alternatives.

Why is this? When conflicts escalate through direct or indirect military intervention, the violence can bear bitter fruits: an increasing number of people wounded or killed, increasingly irrational actions by warring factions, crippled public infrastructure resulting in the spread of disease and the planting of seeds of revenge. Instructed by past experience, the public should be skeptical about a nation’s stated reasons for entering a war. War is often justified for selfless, humanitarian reasons, but states typically do not intervene unless there is some compelling self-interest.

So what should be done in Syria? Some Catholics favor the Obama plan to send small arms and ammunition to the opposition. Others support more decisive military intervention, including the creation of safe zones for Syrian refugees in Jordan, Lebanon and Turkey or the bombing of airfields in Syria that Russia and Iran use to send arms to government forces.

We believe these military options, which can be reasonably defended by people of faith, are the wrong choices at this time. The risks are too great, and there are too many unpredictable factors. Also, U.S. military action would not have U.N. approval, an important benchmark of credibility but not an absolute one because Russia and China will continue to veto any U.S. proposals in the Security Council, irrespective of their merits.

Many believe the choices in Syria are limited to military action (“doing something”) or sitting on the sidelines and letting the death toll climb (“doing nothing”). The United States must reject both options. The question is not if we should intervene, but how.

First, the United States must join the international community by continuing to push for an immediate cease-fire as well as negotiations. Second, the United States should increase its humanitarian investment in the region to $1.4 billion, comparable to the estimated cost of enforcing a no-fly zone for one year. Syrians face a lack of essential services, including access to fresh water. Save the Children reports that the fighting has left two million young people malnourished, suffering from disease or traumatized. The United States should increase support for effective relief programs of the United Nations and the International Committee of the Red Cross, and should continue to invest in grass-roots organizations committed to strengthening civil society through nonviolent initiatives.

Following Pope Francis’ Easter plea for peace in Syria, Bishop Richard E. Pates of Des Moines, Iowa, and Bishop Gerald F. Kicanas of Tucson, Ariz., on June 19 called for the United States to abandon the military option and redouble efforts toward a negotiated cease-fire. “The introduction of more arms simply increases the lethality of the violence and contributes to the suffering of the Syrian people,” they wrote. There should be robust U.S. involvement in Syria, but it should be peaceful.

Editor's Note: Click here for America's coverage of the responsibility to protect.

The Editors
Show Comments (
3
)
Comments are automatically closed two weeks after an article's initial publication. See our comments policy for more.
Leonard Villa
8 years 6 months ago
Can you negotiate with people who behead others at will? They need to be defeated. We need also to champion the Church suffering at the hands of these Islamic extremists? We need a new awareness of the Church suffering given that Christianity is the most persecuted religion in the world. I don't see that issue being raised.
Laicus Romanus
8 years 6 months ago
Why did the United States allow Qatar and Saudi Arabia to provide weapons to the rebels in the first place ? Wasn't that revolution supposed to be a non-violent one ? What about the United States' commitment to be "opposed to any further militarization of the conflict" as a signatory of the Action Group for Syria Final Communiqué of 30.06.2012 http://www.un.org/News/dh/infocus/Syria/FinalCommuniqueActionGroupforSyria.pdf ? Isn't it about time that Roman Catholic Christians reach out to Orthodox Christians, especially to the Patriarch of Moscow Alexis in order to find a common view shared both by the United States and Russia about the future of Syria ?
JOE BLISS
8 years 6 months ago
The situation in Syria is complicated and frustrating. There may be no easy or possible solution. But something must be done to reduce the civilian loss of live. The only force in the world that can make any effort to save lives is the United States. No one wants U.S. troops in the area but there may be a way for humanitarian aid. We need to establish a safe zone for refuges. This would requre the help of other countries, local and european. Economic pressure needs to brought against Russia, China, and Iran To accomplish this we need leadership from the United States. It is sadly lacking. For us this is not a military or economic priority but it is definetly a moral priority.