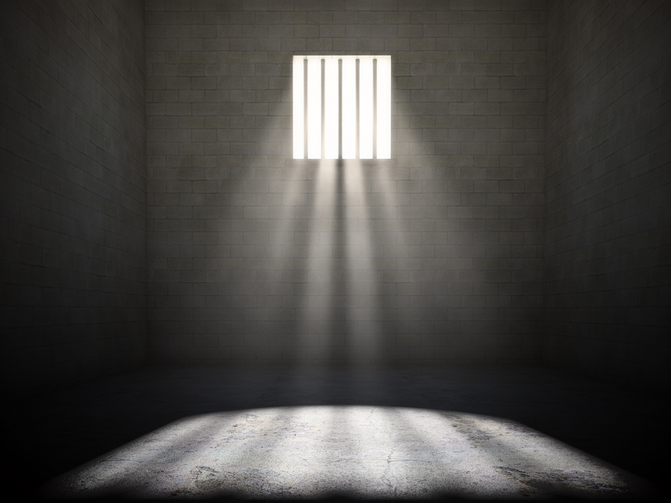 The issue of lethal force—employed by police against African-American citizens in Ferguson, Mo., Staten Island, N.Y., Albuquerque, N.M., and Cleveland, Ohio—remains in the public consciousness as the spotlight shifts now to another deeply embedded abuse of power: brutality in prison. In scandalous numbers, prison guards responsible for the rehabilitation of prisoners abuse them mercilessly—at times to death—and are rarely held to account for their crimes.

For the Christian, reports of this scandal recall images of Jesus the prisoner, whipped, ridiculed and crucified between a repentant and an unrepentant thief. For the U.S. citizen, this treatment brings to mind the truths embodied in the Constitution and the Bill of Rights.

Rikers Island, a complex of 10 jails located in the East River in New York City, holds about 11,000 inmates, mostly African-American and Hispanic men from low-income neighborhoods. About 85 percent of them have not yet been convicted of a crime; nearly 40 percent have a mental illness. Rikers has a history of violence, and now an investigation by The New York Times has identified 62 instances between last August and January in which correction officers seriously injured prisoners. As a result of these altercations, 70 percent of the inmates involved sustained head injuries and half sustained broken bones. In a typical case, on Sept. 2, 2014, four correction officers pulled José Guadalupe, a man classified as mentally ill, into his solitary confinement cell and beat him unconscious. Mr. Guadalupe suffered a concussion and spent three weeks in a wheelchair. According to data from the New York City Department of Correction, guards used physical force against inmates 4,074 times in 2014. In spite of millions of dollars spent to improve conditions, last week Rikers went into lockdown for 34 hours to curb escalating gang violence.

In Florida a record number of 346 prisoners died in 2014, and hundreds of these cases are under investigation. Jerry Washington, a prisoner at the Santa Rosa Correctional Institute, filed a sexual harassment complaint against two officers. Hearing of the complaint, the officers threatened to kill him. Mr. Washington wrote his sister warning her that if he were to die suddenly, these men would be responsible. A week later he was dead. The local medical examiner ruled his death a suicide, a claim his family rejects; a fellow inmate claims Mr. Washington was poisoned.

Now back to Attica, N.Y., the scene of the riot in 1971 that ended after four days only when Gov. Nelson Rockefeller ordered state police to take back the prison from mutinous inmates. They killed 39 men, many of whom were innocent hostages shot down in the hail of bullets. Jump ahead to 2011 when, to punish a prisoner who had shouted a disrespectful expletive, three burly officers at Attica yanked 29-year-old George Williams from his cell and beat him mercilessly, breaking two legs, a shoulder and an eye socket. (Witnesses say he was not the man who yelled.) Unlike hundreds of similar victims over the years, Mr. Williams fought back and got legal support. The attackers were indicted and scheduled to stand trial on March 2 of this year, but a last minute plea deal saved them. They lost their jobs, but they will not go to jail.

Meanwhile, The Atlantic (February 2015) has chronicled the devastating effects of prison rape, particularly on young men housed with seasoned inmates, who will enslave a youth and rent him out to fellow prisoners. The authorities look the other way. In 2003 Congress passed the Prison Rape Elimination Act to address the issue, but implementation of the law has been slow.

A crisis this widespread demands an inclusive political response in which a national advisory committee investigates the problem and proposes congressional legislation to solve it. States should both strengthen the selection and training of guards and raise the salary (the median is now $39,000 a year) to match regular police salaries. They should replace the current training programs, which last from three to 20 weeks, with a post-high school year at a selected university emphasizing social and ethical issues. Prison buildings should be redesigned to promote both security and surveillance but also private and communal space consistent with human dignity. At the same time, churches must make a coordinated ecumenical effort to strengthen their ministries in the jails. The bottom line: prisons must build character, not break spirits.

In 1971, before Attica exploded, two inmates prepared a letter to be sent to Governor Rockefeller. They wanted three things: better education, more religious freedom and more than one roll of toilet paper a month—for the basic human needs to learn, to pray and to be clean. Imagine the lives that could have been saved and transformed if those simple requests had been granted.

Show Comments (
5
)
Comments are automatically closed two weeks after an article's initial publication. See our comments policy for more.
Chris Schwartz
5 years ago
When we incarcerate people, we deprive them not only of their freedom, but rights that you and I take for granted. I have been told by many well-meaning citizens that when someone commits a crime, they give up all their rights: the right to safety, health and even life. This is untrue. The incarcerated do give up their right to freedom, but all their other rights now become the duty of the state to provide, yet, health and dental care are usually provided by the low-bidder in most jails and prisons and we note that when a prison is run by a for profit company, violence goes up substantially. Today’s article, “Peace and Toilet Paper”, is lacking in hard data — only anecdotal information is used. This is largely because the data that would allow a citizen to tabulate how many inmates die in prison due to abuse or neglect is not collected. We really have no idea of how bad it is. As a tax paying citizen, I find it unconscionable to contract out safety, health and dental services to the low bidder. We should take full responsibility to provide these services for the incarcerated. If we can’t afford it, then we shouldn’t be locking up so many. Deacon Chris Schwartz, Coordinator for Ministry to the Incarcerated, Archdiocese of Washington, D.C.
John Wotherspoon
5 years ago
As a prison chaplain in Hong Kong (where prison conditions are among the best in the world) I am saddened to read articles like this, but grateful to America Magazine for continuing to cover this important issue. Shame USA, shame, shame, shame.
Beth Cioffoletti
5 years ago
Thank you America Magazine for staying with this nightmare, week after week shining light into this very dark corner. For inmates and their families, just having someone willing to see and acknowledge what is happening to them is a great comfort and help.
Paul Ferris
5 years ago
When the 13th amendment prohibited slavery it made an exception for incarceration. A prisoners life is worse than slaver. Look what has happened.
Beth Cioffoletti
5 years ago
I agree. American prisons are slavery gone underground.
Advertisement

This article also appeared in print, under the headline “Peace and Toilet Paper,” in the March 23, 2015, issue.