The pilgrim's guide to life at 20-something 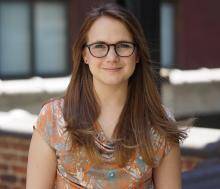 I sit with my feet up on the empty bus seat beside me, my head resting against the cool window, as the Izarraitz Mountains of northern Spain roll behind me. I have at last cracked open the assigned reading for the trip, St. Ignatius’ Autobiography. It seems my procrastination has paid off: I need only lift my gaze from the page to see the very foothills through which French soldiers carried the young Iñigo López back to Loyola after his fateful, and nearly fatal, encounter with a cannonball in the battle of Pamplona.

It is the first sentence that will stick with me as I travel in the footsteps of St. Ignatius on America Media’s pilgrimage this November: “Up to his twenty-sixth year the heart of Ignatius was enthralled by the vanities of the world.” It strikes me that with the exception of one fellow millennial, all of the pilgrims on this bus can, like Ignatius, look back at their 26th year from a comfortable distance. I envy them. At age 25, my vanity remains largely intact and the prospect of a cannonball moment looms large.

Judging by the frequency with which these articles pop up on my Facebook news feed, there is clearly a hunger for some guidance. The problem is, I am fairly certain these creeds are for the most part written by other 26- to 29-year-olds working out of a warehouse-turned-office space somewhere in Brooklyn. Not exactly the best way for readers to gain a broader perspective.

It is an unfortunate fact of modern life that we are increasingly sorted by age; a 20-something can easily go through her week without deeply engaging with someone a decade or two older, beyond her parents or colleagues. For the shrinking pool of millennials still attached to organized religion, even going to church, a traditional mixing ground, means the Sunday evening young adult Mass and fellowship.

The wisdom that was once passed organically between generations in everyday interactions and social gatherings is siloed and often replaced by feelings of bewilderment or distrust. Baby boomers look aghast at the casual encounters among “kids” these days facilitated by dating apps, while young people create “safe spaces” to shield themselves from what they see as the unevolved attitudes toward race and gender held over from their parents’ generation. The spaces where people of all ages can spend time together, and hopefully learn from one another, are few and far between.

Which is one of the many reasons my time in Spain was such a blessing. For 10 days I helped my fellow pilgrims connect to shoddy hotel Wi-Fi and to share their experiences with friends and family back home through social media. In exchange, they shared with me the wisdom that can only come from many years navigating the peaks and valleys of life. I pried and probed the details of their education, careers and family life—You were how old when you went back to school? What brought you back to the church? How old was your daughter when she had her first child?—hoping to come away, perhaps, with the “Five Things Every 20-Something Needs to Be a Happy, Successful, Married Catholic.”

What I got was something much more complicated and far richer. They offered no checklists to follow, no “life hacks,” no guarantees of certainty about the path ahead. Instead there was the perspective of people who understand themselves as pilgrims, who could tell me how things look from a bit higher up the mountain. And what I heard them saying was this: You’re looking at the cannonball all wrong. For many people my age, the luxury of choice can feel more like tyranny; if only something would hit us, we think, even something painful, that would make our direction and purpose clear.

And the pilgrim, as St. Ignatius called himself until the end, responds in his Autobiography: Keep reading. Ignatius’ conversion might have begun with Pamplona; but the still-unfolding story of the Jesuits began with the 38-year-old pilgrim moving in with a couple of 20-somethings at the University of Paris.

Ashley McKinless is an associate editor of America.

@AshleyMcKinlessmckinless@americamedia.org
Show Comments (
2
)
Comments are automatically closed two weeks after an article's initial publication. See our comments policy for more.
Carolann Cirbee
6 years ago
Ashley, you are a wordsmith of whom your generation can be proud! As a retired English professor who helps high school seniors get into college, I cope with the crippling results of curriculum choices that do not include grammar. Your ability to write proves that a 20-something can rise above the mediocrity of today's sloppy usage. You go, girl - shine your light so that others may see the path!
Christian Matozzo
5 years ago
As a fellow Catholic Millennial, I love this article! My parents are boomers and passed on a lot of their tastes in music and movies to me. And yet it's made me feel isolated from my friends who are millennial Catholics, many who find references to old pop culture foreign and some even look upon things that are old with disdain. Meanwhile, I know of old people who think all young people are simply vain and self-absorbed, or dive into tropes that all are Bernie Sanders fans who "want everything for free." There's such a divide in our culture today, a lack of respect and bridge of communication between the old and the young. And with the lack of strong Catholic Millennials today, it can be lonely. But there are initiatives in different diocese, houses of formations, vibrant Newman Centers, and even the community I live in here in Philadelphia are trying to make inroads with young adults who want to engage their faith in a new and vibrant way. One that does not simply discard the old, but one that celebrates the old, and revitalizes it for a new generation. I loved the last two paragraphs in your article, that there is no "Right way" to live, and that we can look at the Cannonball of suffering not with disdain, but with an embrace, as Jesus took his cross on to change the entire world. So we too as Millennials must engage the culture of our peers with a Catholic worldview, precisely to bring it to them.