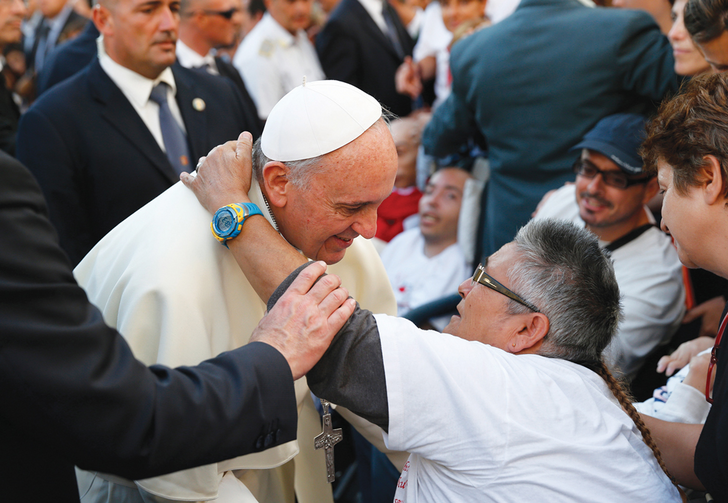 When I first read the substantive interview with Pope Francis in America, I was drawn by the pope’s openness, engaging style and repeated call to “go out” and meet people where they are. What is needed, he says, is nearness and proximity to those who are wounded.

This certainly is a theme he has made something of a mantra in his ministry. I also immediately thought of his remarks as a vivid expression of the new evangelization—to present the Gospel in ways “new in ardor, methods and expression” (Blessed John Paul II, Address to the Latin American Episcopal Conference, March 9, 1983). In the interview Pope Francis says: “The proposal of the Gospel must be more simple, profound, radiant. It is from this proposition that the moral consequences then flow.”

The more I reflected on his message, it struck me as so very pastoral and precisely what the church needs today. His many references to God’s love for us and Christ’s embrace of us reminded me of Pope Benedict XVI’s encyclical “God Is Love” (2005) but now in a whole new way of saying the same message and never losing sight of the heart of the proclamation: Jesus Christ has saved you!

Our Holy Father begins with a remarkable assertion, “I am a sinner,” prompting us to admit that we too are sinners, but, as he adds, “God is greater than sin.” When I read, “The confessional is not a torture chamber, but the place in which the Lord’s mercy motivates us to do better,” I could not help but think of Blessed John Paul II’s “Dives in Misericordia” (1980) and “Reconciliatio et Paenitentia” (1984). Clearly this also echoes the Synod of Bishops in October 2012 on “The New Evangelization for the Transmission of the Christian Faith” that recognized penance as the sacrament of the new evangelization and called for this sacrament to “be put again at the center of the pastoral activity of the Church” (Proposition 33).

The full pastoral focus of both the synod and Pope Francis’ interview is reflected in so many ways. “Those who today always look for disciplinary solutions, those who long for an exaggerated doctrinal ‘security,’ those who stubbornly try to recover a past that no longer exists—they have a static and inward-directed view of things,” the pope says. “In this way, faith becomes an ideology among other ideologies.”

Reading the interview again—because one really must read it multiple times to take in the richness of the Holy Father’s message—I realized it may be a whole new way for the pope to share his thoughts. This is not so much the pope speaking about what we need to know about the Gospel message as it is how to “do” the Gospel message. Again, it is the embodiment of his many invitations to “go out” to people, to build bridges, not walls, and establish a dialogue with all people, even those who do not embrace all of the church’s teachings. He has invited us to meet people where they are and walk with them on the journey to experience God’s love in very practical ways like an invitation to Mass or a conversation about faith. He shares that it takes “audacity and courage.” As Pope Francis himself has spoken about his own shyness, I feel he knows just how courageous we all need to be.

In this interview we meet the pope as homilist. What came to mind was each priest—in the Sunday homily—trying to present God’s love, inspire acceptance of the Gospel and still meet the members of the congregation in real time. I thought of a lesson we were taught years ago in the seminary. From the pulpit we are expected to proclaim the Gospel message in an unvarnished and clear manner, in all its fullness. But then we are to go out to meet people where they are and try to bring them a little closer to Christ. The interview, in my view, has a way of coming out of the pulpit and taking that next and important pastoral step. It is an old message in a new and exciting form. An interview that expresses pastoral responses to people’s needs is by its nature not meant to have the precision of an encyclical.

In the propositions from the synod on the new evangelization, there is a whole section on the primacy of the kerygma—the good news that Jesus died out of love for us, is risen from the dead and wants to be with each of us today in our life journey (Proposition 9).

The interview, in all its wide-ranging observations, is the call for a new evangelization in action. “Proclamation in a missionary style focuses on the essentials, on the necessary things,” Pope Francis asserts. “We have to find a new balance; otherwise even the moral edifice of the church is likely to fall like a house of cards, losing the freshness and fragrance of the Gospel.”

Over and over again, I heard in the interview echoes of the calls, insistent and persistent during the Synod and the general congregations before the conclave, to speak to the issues that people are struggling with—but first and foremost to bring them an experience, a sense of God’s love. “I see clearly that the thing the church needs most today is the ability to heal wounds and to warm the hearts of the faithful,” the pope said. “Then we can talk about everything else.”

The third time I read the interview, I focused on a few highly personal elements that really touched me. When the pope spoke about his prayer life, I felt he was actually talking to me. Finding a pattern for prayer—conversation with God—that works in the midst of all the requirements of our pastoral office was so reassuring because it was not abstract. It showed a pastor balancing his personal spiritual life with his ministry. I particularly liked his comments about taking his work with him to the chapel and not seeing this as a distraction. It reminded me of the same advice from a very wise spiritual director.

Going over the pope’s words, I feel so encouraged. It is refreshing to hear, “The most important thing is the first proclamation: Jesus Christ has saved you. And the ministers of the church must be ministers of mercy above all.” It is encouraging to hear again, “In pastoral ministry we must accompany people, and we must heal their wounds.”

While I recognize this is an interview, not an apostolic exhortation, it is still the voice of the bishop of Rome, the pope, who is providing such pastoral emphasis. It is a gift.