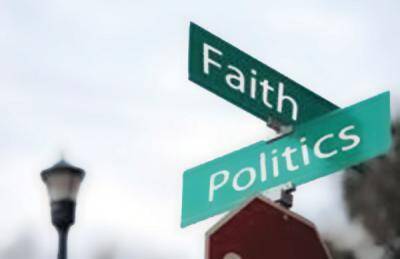 More Americans say churches should express views on social and political issues, up to 49 percent in 2014 from 43 percent in 2010. Those who think there is too little expression of religion in politics outnumber those who believe there is too much by a margin of 41 percent to 30 percent.

These findings suggest challenges for both parties and Catholic leaders:

Republican Resentments. Pew reports that many Republicans say their party is doing a “bad job” and want it to be more conservative on abortion and same-sex marriage. Catholics who are Republicans because of pro-life and traditional marriage convictions may resent that Republican leaders pursue other elements of the Republican agenda more visibly and vigorously. Sadly, many Republicans want their party to be more conservative on legal status for immigrants, obstructing needed immigration reform and efforts to make the Republican Party more competitive in presidential elections by reaching out to Hispanic voters.

Democratic Dangers. Increases in those who see the Democratic Party as unfriendly toward religion reflect battles over contraceptive mandates, conscience rights and religious freedom. A related danger may be electoral strategies that focus primarily on those with no religious affiliation, single women and educational elites, along with African-Americans and Hispanics. This is a White House where Planned Parenthood and gay rights groups have more clout than the A.F.L.-C.I.O. and Hispanic leaders. This progressive version of the culture wars can make the Democratic Party less welcoming for people with traditional religious beliefs. Van Jones, a leader of the progressive left, not the religious right, warned against “becoming this party where you can be spiritual but not religious,” which is “going to leave out a lot of people.”

The Democratic Party has lost Catholics, but the Republican Party has not become their permanent political residence. Catholics with Pope Francis’ priority for the poor and vulnerable may find themselves politically homeless—comfortable with neither Republican economic individualism, which measures everything by the market, nor with Democratic cultural individualism, which celebrates personal “choice” above all else. Neither form of libertarianism leaves enough room for the weak and vulnerable or the common good. The task for Catholics is not to wring our hands but to work in both parties and other institutions to build a new politics that protects both human life and human dignity.

My experience at Georgetown, at Harvard and in Washington, D.C., suggests there is recognition that our challenges are not just economic, military or political but also moral, ethical and, yes, religious. This Pew study reports there is openness and opportunity for Catholics to follow Pope Francis in bringing “the joy of the Gospel” to public life. Our faith offers moral principles, civic virtues and priority for the “least of these” that can help to heal our wounded nation and broken world.

Show Comments (
8
)
Comments are automatically closed two weeks after an article's initial publication. See our comments policy for more.
John Fitzgerald
7 years 1 month ago
Very informative. I'd like to see more of this kind of thing.
fresciouz Smith
6 years 9 months ago
Wow! This is very interesting article. I had read a lot of information. Thank you for sharing this with us. The article is very well written. Keep it up! I am looking forward for more post coming from you.. Please visit this site : buy soundcloud followers
Karl Thomas
6 years 2 months ago
You can easily buy 2k twitter favs from this page as long as you need them.
Sandy Nelson
6 years 1 month ago
Obtain a lot of help if you are planning to buy facebook page likes and increas followers towards your page.
Ruth Ferrer
6 years 1 month ago
You must know the importance of Twitter Followers, especially when it comes to marketing.
Roger Aldridge
6 years ago
Look at the right choice and prefer getmassfollowers to supply you quality followers you need for every social media websites these days.
Tim Mcgray
5 years 12 months ago
You can check this silversaints.com website if you want to be aware on how to prevent wasting too much energy at home.
Jamaica Walton
5 years 10 months ago
There are many tricks on how to Buy youtube views and see better results in your business online.