Why are our schools still so segregated?

Why are our schools still so segregated? 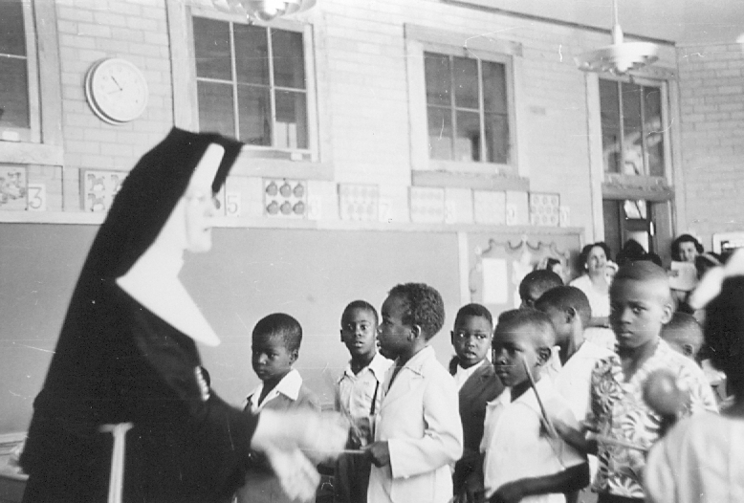 At the end of the five-mile march to mark the first anniversary of Michael Brown’s death, a drumline led a spirited crowd onto the football field of Normandy High School. It was the school from which Mr. Brown graduated nine days before the African-American teenager was fatally shot by a white police officer in Ferguson, Mo., on Aug. 9, 2014.

“Do you know how hard it was for me to get him to stay in school and graduate?” his shocked and grieving mother asked reporters just hours after the shooting. “You know how many black men graduate? Not many.” This mother’s anguish stuck with Nikole Hannah-Jones, a staff writer for The New York Times Magazine, and prompted her to investigate conditions at Mr. Brown’s alma mater, which she described on the radio program “This American Life” ( 7/31).

The student body at Normandy is 98 percent African-American, 74 percent low-income and has a four-year graduation rate of 53 percent (the state-wide graduation rate is 86 percent). The school was stripped of its accreditation in 2012 after failing to meet minimum state standards for over a decade. Across St. Louis County, according to Ms. Hannah-Jones, 44 percent of black children attend schools that lack full accreditation, compared with just 4 percent of whites. These statistics are damning, but hardly unique. Nearly any metropolitan area in the United States shows the same pattern: racially stratified housing, pockets of concentrated poverty and substandard public schools.

Each year billions of dollars are spent on efforts to turn around these failing schools. Well-intentioned disagreements over the merits of No Child Left Behind and Common Core and debates about magnet and charter schools show no signs of abating. And yet the one solution that has been proven to help minority students is not even on the table: integration.

Starting in the late 1960s, court-mandated desegregation efforts began to chip away at the achievement gap between black and white students, cutting it in half in just 17 years. Black students who attended integrated schools graduated from high school and college at higher rates and would go on to earn 25 percent more than peers who attended racially isolated schools.

Integration reached its peak in 1988, at which time 44 percent of black students in the South attended majority-white schools, according to the report “Brown at 60,” by U.C.L.A.’s Civil Rights Project. But a string of Supreme Court decisions since 1991 that rolled back federal desegregation orders, as well as a surge in the Hispanic student population, have given rise to a new wave of educational sorting. A report in 2012 found that 74 percent of black students and 80 percent of Latino students attend schools where the majority of the students are not white, schools where course offerings are slim, teachers are inexperienced and most students qualify for a free lunch. There are no quick solutions to this; segregation in schools cannot be understood or addressed without also tackling segregation in housing and concentrated poverty.

Those disturbed by the current state of affairs are tempted to do no more than call for a strong government response and then decry the political gridlock that makes such a response all but unimaginable. But Christians are called not just to condemn injustice but to share the burden with those who bear its weight. Catholic schools are rightly proud of their strong record of serving minority students in inner cities. What if these schools also reflected the diversity of their communities? In addition to taking full advantage of existing voucher programs (and supporting their expansion) to bring in low-income students, Catholic schools can do more to reach out to families who would otherwise be happy to send their kids to a high-quality public school.

Families have a role to play as well. Though at an earlier time busing was effective in some regions, it was largely a political and economic failure. That means where we choose to live matters. Segregation often results not from overt racism but from the millions of individual decisions of those who, quite understandably, “shop” for a good school district. What if more families crossed the lines of color and economic status in the belief that their children can be richer for their encounter with the other? What if parents with options looked beyond high test scores and demanded the classroom diversity that studies show equips students to succeed in college and beyond?

This fall, millions of children already disadvantaged by the burdens of poverty will return to failing schools. Only when the fate of black and brown and white students is intertwined can our country go beyond interminable reform battles and move on to build an education system that our children deserve and our democracy demands.

This article also appeared in print, under the headline “Our Segregated Schools,” in the August 31-September 7, 2015, issue.