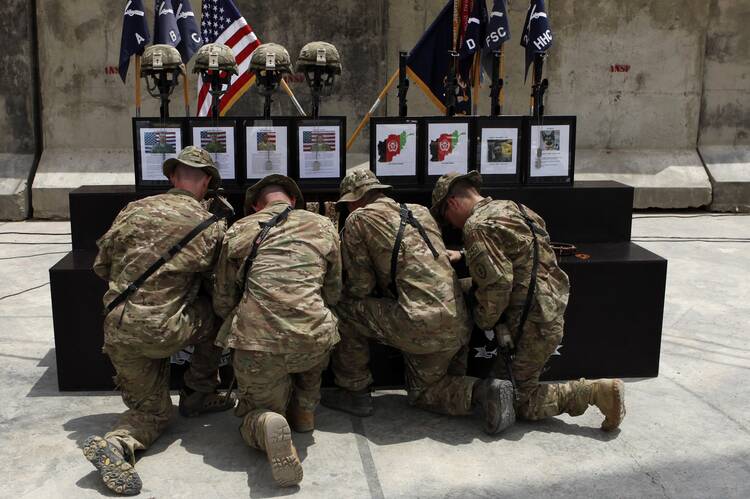 A month ago a Navy SEAL team paddled ashore in the predawn hours in southern Somalia. Their mission was to capture Mohamed Abdulkadir, also known as Ikrima, who was suspected of being “associated with” various bomb plots. But as they approached the militants’ seaside compound, its inhabitants opened fire. The operation commander did not order his team to charge and did not call in an air strike. Instead, he ordered them to withdraw. The compound was filled with women and children, and the Seals would not have been able to capture Ikrima, whom they wanted alive, without killing or wounding innocent civilians. The logic: There would be other opportunities to arrest Ikrima, and the United States should follow the rules of armed conflict and respect human life.

The United States has not always responded this way. The consequences of the Iraq War, for example, are devastating. A study published in The Lancet in 2006 estimated 600,000 “excess deaths” in Iraq. No such study has examined the war dead in Afghanistan. As we leave Afghanistan, our self-examination on this life issue calls for a reckoning with the civilian dead in that country. The United States has claimed to occupy the moral high ground, but history shows we have not held that ground very well.

A report in The Nation (“America’s Afghan Victims,” 10/7) is the most comprehensive document available on the innocent war dead. (One of the reporters, Nick Turse, wrote about civilian casualties in the Vietnam War in Kill Anything That Moves, reviewed by Tom Fox in America, 3/25.) The report reveals that the International Security Assistance Force, the U.S.-led coalition in Afghanistan, does not have accurate numbers on dead civilians despite a commitment made in 2008 to keep better records. Dozens of independent and governmental organizations, including the U.N. Assistance Mission in Afghanistan, are attempting to track these deaths, but there is no consensus. No one office is responsible, and the governments involved, including the United States, do not want to publicize how many noncombatants have been killed. Gen. Tommy R. Franks, the central commander in Afghanistan from 2000 to 2003, once said, “You know, we don’t do body counts.”

The best available academic study is from Brown University’s Watson Institute for International Studies, which estimates, based on U.N. reports, that 19,000 civilians in Afghanistan have been killed by all sides in the conflict. Afghan insurgents are responsible for most of these deaths. The report in The Nation concludes that only between 2,848 and 6,481 of the total civilian dead—including atrocities like an Army sergeant’s killing of 16 people and an air strike that wiped out a wedding party—were killed by U.S. forces. That is small comfort for the Afghan people, who already resent the U.S. presence and are perhaps more ready to accept tragedy inflicted by their own countrymen than by airstrikes and night raids carried out by foreign interlopers.

As the war in Afghanistan intensified in 2008, the effort to keep count of civilian deaths increased, though many agreed the data gathered from Western media reports represented only the tip of the iceberg. The tension between the United Nations and United States increased. The coalition would claim they had killed insurgents, but the local population would tell the United Nations that the victims were farmers. A U.S. bombing in September 2008 killed 92 civilians in one village, and in May 2009 another airstrike killed 140. WikiLeaks revealed in July 2010 that the U.S. military secretly maintained files concerning 4,024 Afghan civilian war deaths between 2004 and 2009.

Killing civilians is not only immoral but also strategically counterproductive. Whether an attack using drones, or night raids on the ground, these actions lead only to new recruits for the Taliban. Gen. Stanley A. McChrystal often called this “insurgent math,” and his aide said every additional civilian casualty generates 20 more insurgents, an increase in road bombs and an additional violent clash between insurgents and U.S. troops in the following six weeks.

In U.S. culture, respect for human life is narrow, sometimes to the point of indifference to the fate of innocent persons who are not military enemies, but whom we kill. We are slow to see those designated “terrorists” as our brothers and sisters. There is a need for a truly independent agency, akin to the Government Accountability Office, to record and publish the names and number of civilians killed on all sides of a conflict. The nightly news should acknowledge both American and foreign dead. Memorials and liturgies that demonstrate respect for all the victims of war would give life to the most challenging words in the Sermon on the Mount.

The Editors
Show Comments (
5
)
Comments are automatically closed two weeks after an article's initial publication. See our comments policy for more.
Bill Madden
8 years 8 months ago
The nature of war is the use of extreme violence in the setting of near or total chaos. The reality is that there never has been a war without civilian casualties and there never will be. The use of military force is a political decision. Those given the power to make the decision for or against war should never forget that when they send the men and women of our military out to do battle they are sending them to kill both enemy combatants and civilians. And anyone who is part of the battle, military or civilian, alive or dead is a true casualty of the experience.
Beth Cioffoletti
8 years 8 months ago
Last year, on Memorial Day weekend, I attended Mass at a Trappist monastery. During one of the prayers the monk said: during this weekend (Memorial Day weekend) we remember those who die in war, those who are fighting for us and those who are fighting against us.
Richard Borowski
8 years 8 months ago
Excellent article and superb response by Mr Madden. As a Viet Nam vet with substantial combat experience, I am concerned that US leadership, mostly without military or combat experience, finds it too easy to commit US forces to difficult, dangerous missions. Bravo to the SEAL team that withdrew rather than causing civilian casualties. Bravo to all the other US military members who in their own way made the same decision, often without it becoming known to the public or being included in battle reports. It happens much more often than anyone without combat experience can ever know or appreciate.
Jonathan James
8 years 8 months ago
The article's focus on the US actions is inappropriate. The editorial board at America Magazine should be condemning the actions of the people who opened fire from behind the protection of women and children. They are the ones who put the civilians at risk.
Jean-Pierre HERVEG
8 years 8 months ago
"God mit uns" ... When you make war you kill and can be killed ... !