Can we redeem a demoralizing campaign season? 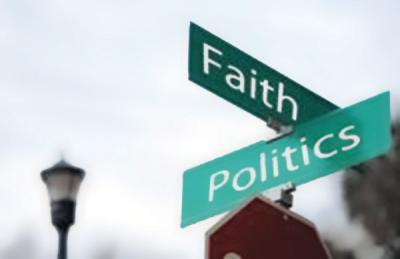 Six months ago Pope Francis told Congress, “You are called to defend and preserve the dignity of your fellow citizens in the tireless and demanding pursuit of the common good, for this is the chief aim of all politics.” I love politics, but I hate much of what passes for politics today. Since that papal challenge, American politics has focused on many things, but not human dignity and the common good.

The Senate will not even consider a nominee for the Supreme Court, and the House still cannot pass a budget. The 2016 Republican campaign has diminished its participants and damaged our country. It begins with Donald J. Trump’s demoralizing mix of attacking women, demonizing opponents and scapegoating immigrants as well as racial and violent overtones and bad policies (a Mexican-built wall, mass deportations, Muslim ban and nuclear weapons). Mr. Trump’s awkward pro-life conversion seems more political than personal. Maureen Dowd of The New York Times reported (4/3) her conversation with him: “I had to ask: When he was a swinging bachelor in Manhattan, was he ever involved with anyone who had an abortion? ‘Such an interesting question,’ he said. ‘So what’s your next question?’”

Mr. Trump was enabled by the silence of Republican leaders out of fear or hope that they might eventually win over his supporters. Old and new media have turned their airways and sites into mostly Trump, most of the time in pursuit of ratings and clicks, providing almost $2 billion worth of free media. Ted Cruz has shown why he lacks respect and friends. Marco Rubio destroyed his hopes when “little Marco” became “little Trump,” embarrassing his children. John Kasich is hoping a positive message can win at a brokered convention. Senator Graham said choosing between Donald Trump and Ted Cruz was like choosing between “being shot or poisoned.” He has chosen the poison of Mr. Cruz to try to stop Mr. Trump.

Donald Trump’s voters have made him a vehicle for frustration and resentments about economics, immigration, trade, race and politics-as-usual. Working-class voters have reasons for anger. Republicans have offered cultural appeals on abortion, family and race, but have delivered tax cuts for the rich, trade deals that favor the powerful and war. The Democratic establishment dismisses these voters, seeking to build a coalition of African-American and Latinos together with single women, religious “nones” and cultural elites who support abortion and L.G.B.T. rights. This bipartisan neglect of white working class voters has real human consequences, since their life expectancy is declining, not rising as with other Americans.

Republican “leaders” hope for a brokered convention to stop a hostile takeover and preserve their status, brand and ideology. Democratic leaders marvel that the Republicans are likely to nominate a candidate more unpopular than Hillary Clinton. Her campaign is winning the most delegates, but with recent losses and without young voters, Democrats hope their electoral college advantages and a Republican meltdown will overcome questions of trust and a thirst for change. But over seven years, Democrats have lost 900 state legislative seats, 12 governors, 70 House seats and 13 Senate seats. Their ads focus more on protecting Planned Parenthood than on lifting up the poor.

Religious leaders seem invisible or irrelevant. Evangelical voters are supporting a three-times-married Planned Parenthood supporter who has never sought forgiveness and loves “Two Corinthians,” though people who attend church weekly are less likely to support Mr. Trump. As Bernie Sanders and Hillary Clinton argue over who opposes limits on abortion more vigorously, where are the progressive religious voices to defend the unborn and to offer alternatives? As Donald Trump and Ted Cruz compete to deport immigrants, ban Muslim refugees and monitor mosques, defenders of religious liberty seem silent or preoccupied by other matters.

Six months ago, who thought a secular, Jewish Democratic socialist, Bernie Sanders, would refer to Pope Francis more than any of the five departed Catholic candidates? Who thought Donald Trump would pick a fight with the pope over immigration and that Francis would respond that “building walls instead of bridges” is “not Christian?” I did not believe that politics could be so broken and demoralizing. One mandate is already clear. Political and religious leaders, parties and media, candidates and voters need to examine our consciences and change our behaviors. We need to return civility, human dignity and the common good to politics as Pope Francis challenged us to do just six months ago.

Show Comments (
4
)
Comments are automatically closed two weeks after an article's initial publication. See our comments policy for more.
William Rydberg
5 years 4 months ago
If what you mean by "return to civility" is what is semi-formally known as "sophistication" in American Catholic Intelligencia Speak, you can keep it IMHO. American Catholic Intelligencia is so in the tank with Hillary and the status-quo that it's almost shameful in my Catholic opinion. So dependant are they upon strings-attached federal funding, that Catholic Moral Teaching, Social Justice, as well as Anti-War, reduced Nuclear stances have been jettisoned through compromises. One supposes, that a guy like Bernie, saying what he does, tends to prick some almost-dead Catholic consciences. Causing people to long for "sophistication" rather than the messy aspects associated with social justice and the striving for a peaceful world. Seems like the only thing that this contemporary American Catholic Intelligencia can agree on is calling the USCCB a bunch of donkeys whenever they even raise Catholic Moral teachings. The American Catholic Intelligencia really ought to be bringing up the subject of structural political change bringing checks and balances to the Presidency and the Congress. Basically, ensure that America remains a democracy in the years to come. In recent years, the Executive branch has increasingly taken on the countenance of the quasi-imperial which is not good for any republic... And especially for the whole world in the case of the United States of America. But that's unlikely to happen soon. After all, return to civility pays well. And of course, is sophisticated. The Catholic Intelligencia must realize that "...consumerist cultures do not foster passion and zeal but rather addiction and compulsion. They demand resistance...." GC35 D2.21 Finally, it would do America Magazine Management a lot of good to read GC35. They seem to have forgotten. Remember that Catholic's are the moral conscience of America. We have the Good News, time to share it with our fellow citizens! Just my opinion, in Christ,
Lisa Weber
5 years 4 months ago
The campaign of Donald Trump has brought us a new low in American politics. While the Republican party richly deserves the chaos he has brought because it has been fostering his kind of behavior for years, the rest of the nation does not. The idea that he could possibly become president is scary. The voters have to demand a higher standard of public discourse before it will change - and that is a unlikely development.
STEVEN MILLIES
5 years 4 months ago
The root of this incivility, I often think, is economic insecurity. Scarcity makes us crazy, and since 2007 it has become impossible to ignore how many of us are terribly vulnerable. The bishops have focused so much on sexual ethics for the last quarter century that the moral implications of these economic realities have gone (mostly) unarticulated, so that today it is difficult for church leaders to find a way into the debate. The challenge is for the church to bring attention back to what CST tells us about our economic lives. Only that, I think, can lead us back to a politics that is focused on reality, one more susceptible to reason.
William Rydberg
5 years 4 months ago
The comments reference to the USCCB (bishops) implies that the writer sees the USCCB as just another of many voices (interest groups?) within the Catholic Church in America. This throw-away comment about the "bishops" in my opinion is emblematic of an old specifically American problem that never went away - Americanism. Not exactly Americanism per Se, but an identifiable variant. I think one of the Popes (perhaps a Leo) may have went as far as describing it as heresy (in the classical meaning of "picking and choosing among doctrines)... Close to 22% of Americans are Catholic according to recent stats... To be sure, the USCCB is not one of many "interest groups" within the Catholic Church in America. As a body, it is its magisterium... In persona Christi, caputus. Just my opinion, in Christ,