Our Moment of Zen: Saying Goodbye to Jon Stewart

Our Moment of Zen: Saying Goodbye to Jon Stewart 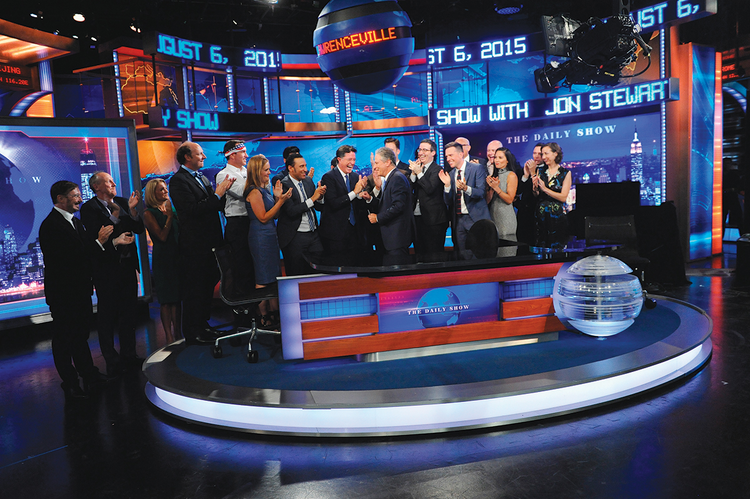 Few things can humble me more quickly than a brief trip to the Home Depot. I recently found myself lost among the store’s countless plumbing supplies, and when I sought the help of an employee, he looked at me with what appeared to be the disgust of an English professor being asked to spell cat. He grunted toward a shelf before shuffling off in the opposite direction.

A few moments later a younger employee approached me and asked how he could help. He immediately showed me the appropriate items and applications. It dawned on me that I’d just witnessed a small act of translation. By listening to my questions there in the plumbing aisle, he’d helped me understand—despite my ignorance and the overwhelming options on the shelves—what I actually needed to complete the job.

My small moment of relief and gratitude was lost on the employee but not on me. In many ways my humbling foray into home improvement mirrors the innumerable acts of translation we try to make daily in the digital age. We are constantly overloaded with endless oceans of information and complexity but we lack the ability to stay afloat, much less fundamentally make sense of much of it. Richard Saul Wurman referred to it as “information anxiety,” which he described as “the black hole between data and knowledge” and “the widening gap between what we understand and what we think we should understand.”

For millions of viewers over the past 16 years, Jon Stewart has been a bridge over that black hole in coping with the American political landscape. His departure from “The Daily Show” on Aug. 6 left many of us with a different type of anxiety: Whom can we trust to give us the daily dose of sanity we require in our polarized nation?

Stewart’s debut on “The Daily Show” in 1999 was well timed. Our body politic’s polarization was growing in the wake of the impeachment of Bill Clinton and the disputed presidential election of 2000. At the same time an explosion in electronic media occurred. Along with it came a bottomless need for content that was being filled by an ever-growing punditocracy, which helped turn the news media into the three-ring blood sport it is today.

Stewart stepped into that mix as a comedian who was not particularly known for political satire, much less topical humor. Prior to arriving at “The Daily Show,” he had spent most of the ’90s hosting a few short-lived talk shows and playing supporting roles in films like Adam Sandler’s “Big Daddy” and guest spots on HBO’s “The Larry Sanders Show.” It’s not as if Stewart came out of nowhere, but certainly no one could have predicted that he would develop into what he has become.

And what he has become is one of the most incisive and intelligent commentators on politics and media in the United States. Those who try to dismiss Stewart as a liberal apologist would do well to read Jacob Gershman’s article “Why Neoconservative Pundits Love Jon Stewart” in New York magazine, in which conservatives confess that “The Daily Show” is one of the few places where the host is “fair” and “fundamentally wants to talk about the issues.”

“Fake news” is not a new phenomenon by any means. The Onion has been around since 1988, and “Saturday Night Live” has had its Weekend Update segment in one form or another for 40 years, to name just two examples. But what Stewart has accomplished is different. Viewers look to “The Daily Show” not simply to laugh but to understand and gain some insight into the endless sound bites and spin that now constitute the highly mediated world of American politics.

Under Stewart’s leadership, the show has been as era-defining as “All in the Family” was in the early 1970s. Where Archie, Edith, Meathead et al. dealt with hot button issues of race, religion, gender and sexuality in a sitcom, “The Daily Show” has used its basic cable pulpit to puncture the ridiculous—and sometimes dangerous—nonsense that characterizes so much of our political and media discourse. His aggressive advocacy for a bill in 2010 that pledged federal funds for the health care of 9/11 workers was instrumental in rescuing it from a filibuster and having it become law. In 2009, he skewered CNBC and its host Jim Cramer for being disingenuous about the extent of banking troubles leading up to the collapse of 2008.

Perhaps his most famous moment didn’t come on his show at all but when he confronted Tucker Carlson and Paul Begala on their CNN show “Crossfire,” telling them that their program’s polarizing political theater was actually “hurting the country.” His appearance led to the show’s cancellation soon after.

The truth is that it wasn’t simply Stewart who created this phenomenon; his audience was a willing collaborator as well. The sort of media satire “The Daily Show” has produced over 16 years could not have had the impact it has had without an audience that has been steeped in media/marketing/spin since birth and has become sophisticated enough to see the substance and critique behind the humor. This younger audience gets its information in countless ways—the web, television, social media, etc.; it is Stewart and his team at “The Daily Show” who offer context and candor.

And over those 16 years there has been abundant need not only for context and candor but also for outrage, sadness and every emotion in between. Hanging chads, the terrorist attacks of Sept. 11, 2001, the war in Iraq, Hurricane Katrina, Osama Bin Laden, the economic collapse, the election of our first African-American president and the debate over health care—just a small sampling of the issues “The Daily Show” has taken on. In the process of entertaining and informing it has also helped viewers feel less alienated and alone in our complex world.

“‘It can be said of three men that, in their time as communicators, this nation hung on their words, waited in eager anticipation of what they were going to observe and report and treat in their special way—Mark Twain, Will Rogers and Walter Cronkite.” When a UPI senior editor wrote this hyperbolic assessment of Cronkite’s retirement in 1981, television news consisted of three major broadcast networks. Cable television was in its infancy, CNN was less than a year old and Rupert Murdoch’s major U.S. media outlet was The New York Post.

To say that we live in a different media age would be an epic understatement. In evolutionary terms, news media over the past 35 years have evolved from harnessing fire to nuclear proliferation. The simpler world in which Cronkite plied his trade has fragmented beyond recognition. In the information age, Jon Stewart’s great contribution has been to hold up a fun house mirror to our shattered body politic and show us how those fragments might still fit together.

Show Comments (
2
)
Comments are automatically closed two weeks after an article's initial publication. See our comments policy for more.
MICHAEL GUIDRY
5 years 2 months ago
Are you serious about this Bill ? You can replace Jon by following real print, radio and TV news media.
Bill McGarvey
5 years 2 months ago

Thanks for your comment Michael. I'm aware that I can follow traditional media--I always have and still do--my piece here was meant to address how Stewart's take on the news was a welcome and compelling alternative to the conventional main stream media.

This article also appeared in print, under the headline “Our Moment of Zen: Saying Goodbye to Jon Stewart,” in the September 14, 2015, issue.

Bill McGarvey, a musician and writer, is the author of "The Freshman Survival Guide," owner of CathNewsUSA.com and was the longtime editor in chief of BustedHalo.com. Twitter: @billmcgarvey.