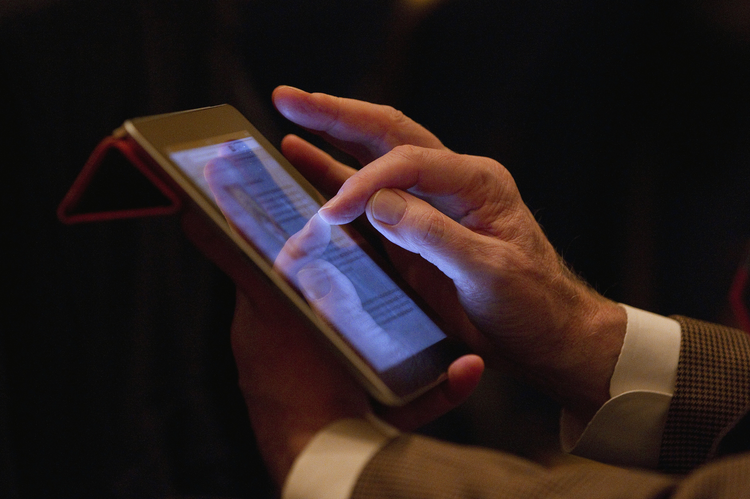 When Pope Francis remarked last month that the Internet was “a gift from God,” his comments may have seemed a little tardy. After all, the Internet has been with us in one form or another for decades, and it is such a ubiquitous part of our lives that pronouncements pro or con seem moot. No matter what you may think of it, the Internet is here to stay.

On further reflection, however, the pope’s words come at an appropriate cultural moment. The arrival of smartphones and tablets has introduced a whole new mode of social interaction. Online dialogue, which has never been known for its charity, has taken a horrific turn, with some anonymous Twitter users harassing women online and even threatening rape. The National Catholic Reporter chose to shut down its comments section last month because of the high level of vitriol. Meanwhile, even Hollywood is starting to question our digital addictions. Spike Jonze’s film “Her” presents a dystopian look at a lonely man who falls in love with his computer’s operating system.

Mr. Jonze might be surprised to find himself in agreement with Pope Francis, but they share some of the same concerns. “The Internet, in particular, offers immense possibilities for encounter and solidarity,” the pope said in his message for World Communications Day. “This is something truly good,” but “the desire for digital connectivity can have the effect of isolating us from our neighbors, from those closest to us.” This digital isolation will only grow more acute as technology progresses. Imagine being attached to your computer at all times, whether through your watch or your glasses. Genuine human encounters will only be more difficult in a society filled with digital barriers.

So is the Internet truly a divine gift? Yes. Ask the elderly living on their own, who can watch their grandchildren grow up on Facebook even if they live in another town. Ask the parents of a soldier in Afghanistan, who can look their son or daughter in the eye while talking to them on Skype. These digital interactions will never replace human encounters, but they help to cultivate human connections. The writers among us may romanticize the age of letter writing, when correspondents opened up their hearts on the page, but surely they too would have embraced a technology that allowed them to speak to their beloved face-to-digital-face.

Even online communities, often derided as digital echo chambers, can serve to build community if moderated appropriately. Social media have been a source of genuine spiritual counsel and nourishment for many people. One recent discussion convened by an editor of America explored where readers find God. “In the suffering of my daughter who has cancer. I see his joy, his peace and his love,” one reader wrote on Facebook. Another posted to Twitter: “In the colors of the goldfinch’s wings. Today was the first time I ever thought about God’s design of them.” To be sure, there are serious problems with Web sites that allow people to air their desires anonymously and without consequences. This is a sign of the sinful world that we live in. The Internet gives us a shocking look at the work of the evil spirit in our midst.

The Web is an unusually effective mirror, one that reflects human nature in surprising and scary ways. Perhaps no human invention to date has such potential to bring us together and tear us apart. Parents face a gamut of new choices and responsibilities related to the gift of the Internet. It will be their job to ensure that it enhances, not diminishes family life and to protect their children. The church, through practical and ethical guidance, should be prepared to assist them to assume this evolving burden.

Making sure the Internet builds community instead of destroying it will fall to a new generation of digital curators. These people will need to be good conversationalists with attractive personalities, but also an instinct for finding common ground. Gatekeepers will also be necessary to dive into the maw of digital data and separate the gold from the dross. Some of them will work for traditional news operations, but no institutional affiliation is necessary. This is already happening on places like Twitter and Tumblr, but with varying degrees of success. Training digital curators and finding a business model to support them will be necessary if the tech revolution is to truly take root.

If the Internet is a gift from God, then it falls upon us to nurture that gift. As a Catholic media ministry, America is well aware of that responsibility and the great challenge it presents. The skills required to foster a true digital revolution are indeed unusual: part journalist, part diplomat, with a minister’s eye for the troubled soul. The Catholic media may be uniquely positioned to serve in this role. Whether we succeed will depend on the daring and creativity of our best practitioners.

This article also appeared in print, under the headline “Our Digital Future,” in the February 17, 2014, issue.