Now is the time to reform the United Nations 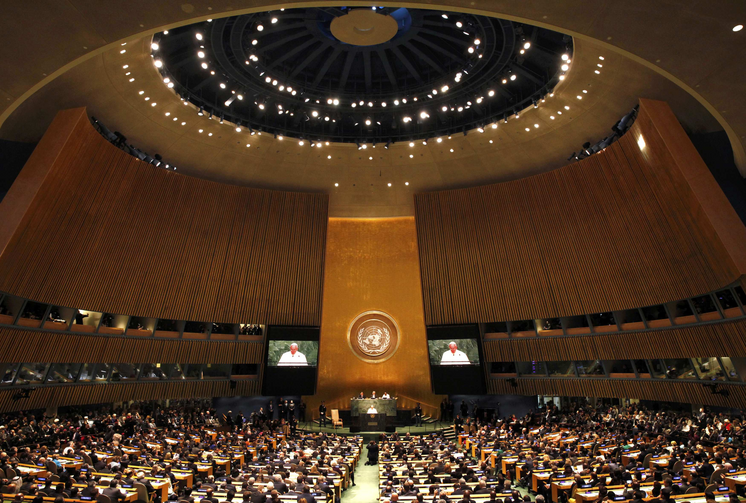 Our world is more connected than ever before. The global community is facing crucial turning points on issues that cannot be solved by a single nation, including climate change, the refugee crisis and inequities within the international economy. While hundreds of intergovernmental organizations work toward the common good, the United Nations, now in its 71st year, is poised to take the lead in pushing for stronger global governance and a just world. In December the U.N. Framework Convention on Climate Change will offer perhaps the best chance for international leaders to tackle climate change, spurred on, in part, by encouragement from Pope Francis. At the same time, the United Nations is rethinking its approach to peacebuilding and human rights as well as its organizational structures. Though this state of flux brings challenges, it also offers opportunity for true change.

During his address to the U.N. General Assembly on Sept. 25, Pope Francis reaffirmed the church’s ongoing support for the United Nations and the unique role the organization can play today. He also urged reforms aimed at greater inclusion of all member states and emphasized that solutions to climate change and regional conflicts must center on the people, especially the marginalized, who are affected.

Earlier this month, Archbishop Paul Gallagher, the Vatican’s secretary for relations with states, elaborated on that call, asking for renewed attention to the more than 50 ongoing conflicts across the globe, as well as the “alternative international community” that exists among quasi-states and terrorist organizations, and to the huge number of refugees. Archbishop Gallagher also pointed to four areas of focus in which the United Nations can continue to make a positive impact on our world today: the responsibility to protect, the responsibility to observe existing international law, the need for disarmament and working to slow the ill effects of climate change.

Amid these many challenges, Archbishop Gallagher’s call to recommit to the Responsibility to Protect is particularly timely. Although not an easy task, the international community is bound by the U.N. charter to do so. Failing in this, Archbishop Gallagher said, “would betray not only those who drafted the charter, but also the millions of victims whose blood was shed in the great wars of the last century.” International responses to conflict in Libya and Syria have been unsuccessful for somewhat different reasons, but they should inspire the international community to recommit itself to more robust responses in the future, including not only constabulary forces to carry out enforcement measures but appropriate funding and staffing for post-conflict rebuilding.

The United Nations, heeding the findings of the report of the Commission on Global Security, Justice and Governance, “Confronting the Crisis of Global Governance,” must also work for true internal structural reforms, including making better use of the International Court of Justice and its advisory role, and urging greater willingness to dialogue among member nations.

Particular attention should be paid to the reform of the Security Council. The power of any of the five permanent members of the U.N. Security Council to veto substantive measures has long caused tension among the member states. This has led to a lack of action on timely issues, often serving as an impediment to the secure and just world the United Nations was founded to uphold.

As these changes are discussed, leaders at the United Nations should always remember that their work must be based on respect for the dignity of every human life and the diversity of cultures. This is where the church can play a particularly important role. Over 100 Catholic nongovernmental organizations, run by both religious and lay groups, work in partnership with the United Nations and represent the needs of many marginalized people. These N.G.O.’s understand situations of conflict from a regional and political perspective, as well as on a personal level. They serve as a religious and moral force at the United Nations and as a voice for the people on the ground. There is much the United Nations can learn from these groups as it seeks stronger relationships with local communities.

Of course any reform must be sure not to value rules and regulations more than the people they protect. All work of global governance must, as Pope Francis has urged, be “guided by a perennial concept of justice and constantly conscious of the fact that, above and beyond our plans and programs, we are dealing with real men and women, who live, suffer and struggle.”