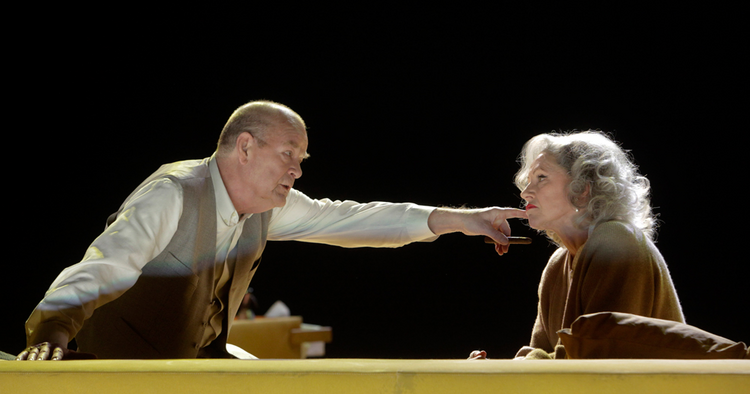 We were seated in the Guild Theater, following Eugene O’Neill’s latest and most passionate denunciation of life and living, “Mourning Becomes Electra.” To his notion, seemingly, we should all be dead. There were those in the audience who almost wished they were dead. There were others who feared they might soon be.

As to the play itself, it is laid in O’Neill’s world, not in ours, and we go with him to the sunless planet that he inhabits because he fashions the dark and devious happenings there into such powerful, macabre plays, and shows us strange and sinister characters in them. It is always O’Neill we are shown. It is never life. Or at best, it is a cross section of real life, earthly and malignant and thrown out of focus by the playwright’s extraordinary lack of proportion. He looks at humanity with jaundiced, red-rimmed, astigmatic eyes.

Other reviewers of O’Neill’s plays for America were equally harsh. In the magazine’s 1928 review of O’Neill’s “All God’s Chillun Got Wings,” a critic concludes his remarks with an attack on the playwright that lacked Ms. Jordan’s wit: “Mr. O’Neill is true to himself in choosing the most disagreeable theme and aggravating its unpleasantness.”

America’s critics were obviously hard on Eugene O’Neill. His plays were innovative and successful, but they were godless. They depicted vivid acts of violence, murder, suicide, social evils and moments of dark despair. It was not until a 1946 review of O’Neill’s “The Iceman Cometh” that a reviewer at least praised Eugene O’Neill for his fierce honesty, his almost quixotic intellectual integrity. Indeed, the Catholic world, while Eugene O’Neill was alive and productive, rejected O’Neill in much the same way that O’Neill had earlier rejected his Catholic faith.

Sixty years ago, on Nov. 27, 1953, Eugene O’Neill died on the fourth floor of the Hotel Shelton in Boston. Boston University acquired the building in 1954, and it remains in use today as a dormitory for upperclassmen. In 1951 O’Neill had moved to the hotel with his third wife, Carlotta Monterey, from a cottage on the north shore of Massachusetts. O’Neill needed to be closer to his doctors. After nearly 10 years of suffering from a degenerative disease that resembled Parkinson’s, O’Neill died of pneumonia. He had stipulated that no one attend his funeral—certainly no man of God.

In their biography, Arthur and Barbara Gelb quote O’Neill telling his wife, “Get me quietly and simply buried…and don’t bring a priest. If there is a God and I meet Him, we’ll talk things over personally, man to man.” Carlotta succeeded in keeping the burial a secret. Only Carlotta, O’Neill’s nurse and his doctor attended the burial at a secluded plot in Forest Hills Cemetery in the Jamaica Plain neighborhood of Boston. Nothing was said or sung. After a wreath was laid on the coffin, Carlotta turned and left the grave without shedding a tear. She would be buried next to her husband in 1970.

To some extent, Elizabeth Jordan’s depiction of Eugene O’Neill’s world as sunless and sinister was quite accurate. He suffered and saw the sins and suffering of others. Dorothy Day recounts the day when she and O’Neill witnessed O’Neill’s friend Louis Holliday inject enough heroin to kill himself in a Greenwich Village bar in 1918. The incident affected both Day and O’Neill deeply. Soon after Holliday’s death, Day left the Village and became a nursing student, and Eugene left for Provincetown. The death haunted O’Neill all his life.

Because of his illness, O’Neill was unable to grip a pen and write anything during the last seven years of his life. Having moved to Marblehead, Mass., he became isolated. He did not want to see others, nor did anyone wish to see him. In 1950, O’Neill’s son, Eugene Jr., committed suicide. The event was especially gruesome; some time after his son had slashed his wrists and one of his ankles in a bathtub, he tried to save himself and died on the floor of his house near the front door. O’Neill did not attend his son’s funeral. He was also estranged from his daughter, Oona, after she married Charlie Chaplin. Another son, Shane, was a heroin addict also disowned by his father. Shane O’Neill committed suicide in 1977. In the last years of his life, O’Neill made his third wife sole executor of his estate and made no mention of his children.

This was a dark world that was saturated with death and desire for death. But it is not, as Elizabeth Jordan pointed out in 1928, a world confined to Eugene O’Neill. The earthly and malignant and disproportionate world of O’Neill was familiar to many who read or attended his plays. O’Neill’s masterpiece, “Long Day’s Journey Into Night,” resonates with anyone who has experienced despair, illness and resentment in families. Shortly after the play debuted in the United States in 1956, a reviewer for The Nation, Harold Clurman, articulated the power of the play this way:

It is an unabashedly autobiographical statement, something torn in agonized honesty from the memory and conscience of its author—who appears to have been compelled to set down this testament of his early home life to preserve his sanity. His chief…purpose was the revelation of himself to himself. There is something moving, even great, in the impulse of the play, and no one can witness it without reverence for the selflessness of this extremely personal act.

Indeed, O’Neill was fiercely honest in his writing, and there is one play that resonated deeply with critics at America for its depiction of an honest search for God. It is a play that is rarely mentioned in academic criticism of O’Neill and is rarely reprinted.

“Days Without End” is a fascinating snapshot of O’Neill’s struggle with faith in the years 1932-34. Perhaps it fails to have the impact of his other plays because the ending—the main character’s return to faith after a terrible, decades-long crisis of faith—was ultimately disingenuous. The ending troubled O’Neill, and he later dismissed the play. It portrays the anguish of a young man who rejected his faith after his parents died. He spends his life searching for truth, embracing atheism, socialism and anarchism. Finally, he falls in love but fears his wife’s mortality. In order to avoid the possibility of despair in the event of her death, he commits adultery, destroying his happiness on his own initiative. In the wake of his affair, his happiness shattered, he appears on the stage as two different characters, emphasizing his fractured state. In telling his story as if it were the plot of a novel, the main character offers the following remark about himself in the midst of the drama:

He ended up by becoming an atheist. But his experience had left an indelible scar on his spirit. There always remained something in him that felt itself damned by life, damned with distrust, cursed with the inability ever to reach a lasting belief in any faith, damned by a fear or the lie hiding behind the mask of truth.

Despair swirled in him and animated his plays. Yet six decades after his death, O’Neill’s plays remain powerful because of their honesty. Take another look at the work of a man who struggled mightily to grasp truth. Perhaps it will help us to become more honest about the strength of our own grasping and to have compassion on those who struggle sincerely with faith.

Show Comments (
2
)
Comments are automatically closed two weeks after an article's initial publication. See our comments policy for more.
HARRY REYNOLDS
6 years 8 months ago
In the 1920's, found among the Selected Letters 195 of O'Neill, there is one in which he sees life as a compelling mystery for man to struggle with. On a scale of one to ten for descriptions of God, I would give O'Neill a ten and an extra five for spelling mystery with a capital M. I very much admired the writing of the article, its prose, juidgmental balance, and the kindness that threads through it.
Daniel P Quinn
6 years 7 months ago

Great article on O'Neill who I have written about as well and he has haunted me as a writer and director Off-Broadway. The Irish Rep has staged definitive productions of THE HAIRY APE which I saw twice, and Emperor JONES which I missed. My grandmother was an O'Neill, her Father Bernard O'Neill managed the Landmark Tavern on 46th and 11th avenue, as she was born there. Bernard O'Neill appears in my book "organiozed labor" (Author House) 2004-5.

This article also appeared in print, under the headline “O'Neill's Dark Passage,” in the November 25, 2013, issue.