One Human Family: The pope's radical call to community 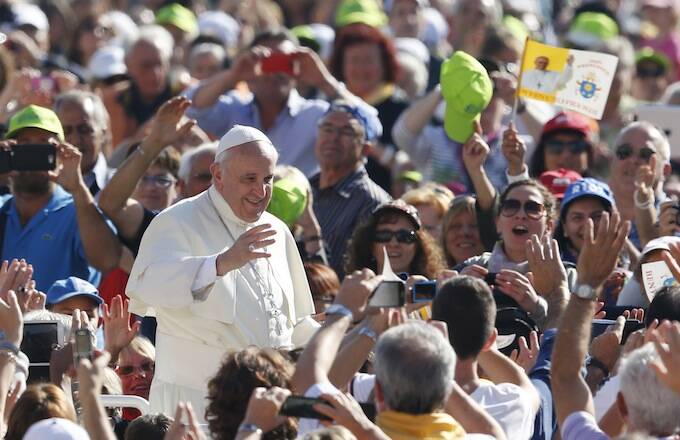 When Pope Francis decided to live at Santa Marta, the Vatican guesthouse, instead of the traditional papal apartment in the Apostolic Palace, many lauded him for his simplicity and rejection of perceived luxury. While he is indeed a humble man, Francis gives another reason for his decision to remain at Santa Marta: his yearning for a strong sense of community. “I cannot live without people. I need to live my life with others.”

Francis bears testimony to this interpersonal spirituality not only in his words but in his visits around Italy. In his interview, we find more evidence that this is simply authentic Francis; in his openness he offers an invitation to respond to the Gospel and to be more fully human. Earlier this month, Pope Francis visited the Jesuit Refugee Center in Rome. Standing with the refugees, many of them fleeing horrific violence, he stated, “To serve means to work alongside the neediest, first of all to establish a close human relationship with them, based on solidarity. Solidarity, this word elicits fear in the developed world. They try not to say it. It’s almost a dirty word for them. But it’s our word!” Our Word—The Holy Father reminds us in many of his speeches that solidarity is our word, but he is also continuously pushing us beyond the comforts of our religious boundaries to encounter the one human family.

Reflecting on the need to “think with the church,” Francis beautifully situates the community that is the people of God: “In this history of salvation, God has saved a people. There is no full identity without belonging to a people. No one is saved alone, as isolated individual, but God attracts us looking at the complex web of relationships that take place in the human community. God enters into this dynamic, this participation in the web of human relationships.” This reminder that we are one human family and we are called into relationship with God and neighbor is very much needed in our time. A radical element of Catholicism, as Thomas Aquinas noted, is that we are called by God for union with God, for friendship with God, and that friendship with God requires loving our neighbor.

This interview is not out of character for Pope Francis, who has shown a remarkable degree of openness and intimacy since he was elected. His recognition that my humanity is bound up with his and with those suffering in poverty is the pastoral message America needs most today. We have a crisis of community, evidenced by the fact that the House of Representatives recently voted to cut $4 billion from the Supplemental Nutrition Assistance Program. Can we really say solidarity is “our word” when our country is so individualistic that we do not feel a moral responsibility to feed the hungry?  The Gospel and Pope Francis remind us that Christ entered into our community by becoming vulnerable and going to the margins.

Meghan J. Clark is an assistant professor of moral theology at St. John’s University and a displaced resident of Long Beach, N.Y.