Should you become a deacon? Maybe. 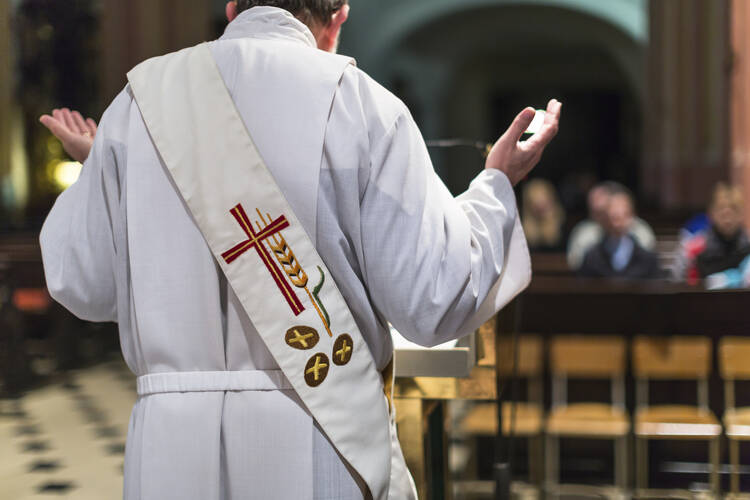 I’ve only ever met one person of my generation—just barely young enough to be millennial—who claimed a calling to be a deacon. He was an Episcopalian. He was studying for a master of divinity degree at an eminent university more accustomed to producing graduates who aspire to lofty titles like chief executive officer and bishop. But he spoke about the deacon’s special role as a bridge between the hierarchy and the people, and about the humility and holiness of the calling. He spoke about it as a way to heal the church’s divisions. After a few minutes’ conversation in a doorway, he got me wondering for the first time about that calling for myself, though I was then still far from the age of 35, the minimum for a deacon in the Roman church. There was no shortage of times during those years, as a new convert to Catholicism, when I had been asked about becoming a priest; never had the diaconate come up.

How many of us have considered the diaconate for ourselves? Our Prayers of the Faithful often include hopes for priestly vocations, but how often for deacons? It has been half a century since the Second Vatican Council restored the permanent diaconate, including for married men, and now Pope Francis has established a commission to consider renewing the women’s diaconate. The possibility of this neglected order may soon concern a whole lot more of us.

Historians are therefore revisiting stories of deaconesses in the early church—trusted, powerful, significant women. Activists are drawing up battle lines around this latest threat to the familiar patriarchy. Less loud and less visible, surely, are the women and men who are quietly pondering and praying over the calling. Maybe they are imagining what they would preach from the pulpit or how they would soothe a baby they’d just baptized. Maybe they’ve begun mentioning the idea to their spouses or getting teased about it by their children.

We can bet the pope is ambivalent, at best, about a diaconate that welcomes women. In the past he has replied to the idea of women cardinals, for instance, with concerns that it would only further reinforce the clerical elitism he has sought to dispel. “Women in the church must be valued,” he once said, “not clericalized.” He rightly wants to celebrate a wider range of vocations in the life of the church, not just those with a rung on the hierarchy. Yet that has not stopped him from appointing men as cardinals. This is a clerical church. To set up “clericalism” as an outright barrier to some and not others only undermines the seriousness of a campaign to challenge its excesses.

Your Holiness, you are the pope, which is why (in addition to your particular wisdom and charisma) your opinion matters in the first place. Most of the rest of us aren’t popes, aren’t priests, aren’t deacons, aren’t even columnists for America. Our particular wisdom and charisma stays boxed in and silent when we gather with our neighbors for worship. We listen, over and over, whether or not what the clerics say is wise, charismatic or even coherent. Clericalism is the least of our problems. What we lack, rather, are voices—each other’s voices, each other’s wisdom. We get traces of it over coffee when the Mass is ended, but even then we are so unpracticed in speaking out our faith that we mostly stick to safer secular topics. When the priest walks by, we act like we were talking about the Bible readings.

This silence is more deadening than clericalism, especially when there are ever fewer actual clerics. The first and best antidote, always, is to allow the Spirit to speak more freely and confidently through us as laypeople. But at least as long as ours remains a church run by clerics, as long as we confer on their hierarchy a near-monopoly on voice, we should flood into the service of holy orders however we can. We must keep them holy, and honor the ways of our ancestors, but let doing so hold back no one with a true calling to preach and baptize as our God commands.

Should you become a deacon? Maybe. I don’t know. Sit with that beautiful possibility. Let it nag you, if it will. There are so many good callings in the world and the church, yet this one has been overlooked for far too long. The pope wants us to study it with fresh eyes. But let’s do more than study. Let’s flood it—with our vocations, our voices and our prayers.

@ntnsndr
Show Comments (
6
)
Comments are automatically closed two weeks after an article's initial publication. See our comments policy for more.
William Rydberg
5 years ago
When one meets a Deacon, the opinion that more Deacons are needed usually comes to the surface pretty quick. Now discussion about the possibility of changing the Church understanding of the Sacrament of Holy Orders is on the Horizon. Could this be re-clericalization by stealth? One appreciates that you are a convert, But For those of us old enough, clericalism was so embedded from prior to Vatican II that a signifiers of an Uncle or Aunt's piety was that he or she had "thought" about being a priest or "considered" entering the Motherhouse. As far as people 35 or more wanting to be deacons, there happens to be no shortage in my local Parish. One "graduated" last month... The requirement in the Archdiocese is that the spouse take the courses and approve. In my opinion, In Christ,
alan macdonald
5 years ago
Yep, this fits the American Jesuit goal of female ordination in a tangential way. Let's print it!
Lisa Weber
5 years ago
I would love to be a deacon, but women aren't allowed to speak in this church. It makes me wonder what the men in the church hierarchy are so afraid of, that they categorically silence all of the women. Jesus instructed the women at the tomb to go and tell his disciples of his resurrection. Jesus gave women the authority to teach and preach the good news. Why does the church hierarchy contradict Jesus?
Robert O'Connell
5 years ago
Amen! The idea that women cannot be priests because Jesus (a) was a man and (b) only picked men to be Apostles is something too difficult for me to understand and, with all due respect to Saint John Paul, too difficult for my feeble conscience to accept.
Bruce Snowden
5 years ago
Nathan – I mean Bill, no, I mean Nathan, get it? As a“tealogian” you know, someone sipping tea, maybe coke, or coffee, even a beer, some wine perhaps, yeah why not, add a cocktail or two, while discussing call it “teaology,” I mean religion,(theology) like me, brashly, ventures to say that, just as the entire Church is Priestly, it is also entirely Deaconal. Like Jesus who came “to serve, not to be served,” we are a Servant Church ordained by the Spirit and pre-approve through Baptism to serve ministerially in ways apostolically imaged in Acts and elsewhere . I leave to REAL theologians, however, the task explaining how to do so in a holy and orderly manner, hopefully validating fundamentally at least in principle, what I have tried to say. And to you, Nathan, I say Do it!
Mark Asselin
5 years ago
Thank you for this column exhorting readers to consider whether God might be inviting them to be deacons, and calling on the Church to pray more earnestly for vocations to the diaconate. Mr. Schneider addresses something of the charism of the deacon in pointing to the humility of the diaconate and its opportunity to heal divisions in the Church, as well as the deacon’s more visible role as an occasional homilist. But to leave it there, I think, misses the essence of this vocation: the deacon’s role as servant. Saint Pope John Paul II wrote, “The service of the deacon is the Church’s service sacramentalized”—just as in the ordained priesthood the priesthood of all believers is sacramentalized. At ordination, the deacon is forever imprinted to Christ as servant. The deacon’s diakonia or service, especially through the liturgy, the Word, and works of charity, energizes the common diakonia of all believers in Christ. As a deacon candidate, I find this description of the diaconate to be most compelling and exciting. Mark L. Asselin, Bethesda, Md.