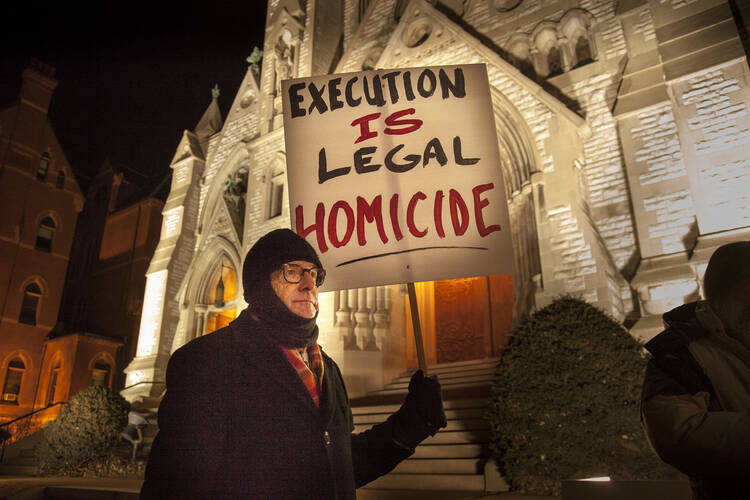 Next month, the U.S. Supreme Court will hear arguments in Glossip v. Gross, a case out of Oklahoma that challenges the most widely used lethal injection protocol as being cruel and unusual punishment.

The court took up the case in January after a year of three high-profile, problematic executions in three states. The court will likely issue a ruling by June. Our hope is that it will hasten the end of the death penalty in the United States.

Archbishop Thomas Wenski, of Miami, and chairman of the U.S. bishops’ Committee on Domestic Justice and Human Development, praised the decision, saying, “...the use of the death penalty devalues human life and diminishes respect for human dignity. We bishops continue to say, we cannot teach killing is wrong by killing.” The chair of the Pro-Life Activities committee, Boston Cardinal Seán O’Malley, also praised the court’s decision to hear the case. “Society can protect itself in ways other than the use of the death penalty,” Cardinal O’Malley said. “We pray that the Court’s review of these protocols will lead to the recognition that institutionalized practices of violence against any person erode reverence for the sanctity of every human life. Capital punishment must end.”

We, the editors of four Catholic journals—America, National Catholic Register, National Catholic Reporter and Our Sunday Visitor—urge the readers of our diverse publications and the whole U.S. Catholic community and all people of faith to stand with us and say, “Capital punishment must end.”

The Catholic Church in this country has fought against the death penalty for decades. Pope St. John Paul II amended the universal Catechism of the Catholic Church to include a de facto prohibition against capital punishment. Last year, Pope Francis called on all Catholics “to fight...for the abolition of the death penalty.” The practice is abhorrent and unnecessary. It is also insanely expensive as court battles soak up resources better deployed in preventing crime in the first place and working toward restorative justice for those who commit less heinous crimes.

Admirably, Florida has halted executions until the Supreme Court rules, and Ohio Gov. John Kasich has postponed all seven executions in the state scheduled for 2015 pending further study. Pennsylvania Gov. Tom Wolf declared a moratorium on the death penalty until he has received and reviewed a task force’s report on capital punishment, which he called “a flawed system...ineffective, unjust, and expensive.” Both governors also cited the growing number of death row inmates who have been exonerated nationwide in recent years.

In a statement thanking Wolf, Philadelphia Archbishop Charles Chaput said: “Turning away from capital punishment does not diminish our support for the families of murder victims.... But killing the guilty does not honor the dead nor does it ennoble the living. When we take a guilty person’s life we only add to the violence in an already violent culture and we demean our own dignity in the process.”

Archbishop Chaput reminds us that when considering the death penalty, we cannot forget that it is we, acting through our government, who are the moral agents in an execution. The prisoner has committed his crime and has answered for it in this life just as he shall answer for it before God. But, it is the government, acting in our name, that orders and perpetrates lethal injection. It is we who add to, instead of heal, the violence.

Advocates of the death penalty often claim that it brings closure to a victim’s family. But advocates who walk with the families of victims, like Mercy Sister Camille D’Arienzo, tell a different story.

“I think of mothers who attend our annual service for Families and Friends of Murder Victims,” a program the Mercy sisters have sponsored for 18 years. “Asked what they want for their children’s killers, no one asks for the death penalty,” she said. “Their reason: ‘I wouldn’t want another mother to suffer what I have suffered.’ Their hearts, though broken, are undivided in their humanity.”

The facts of the case in Oklahoma—which echo reports from Ohio and Arizona—were especially egregious. Last April, the drug protocol failed in the execution of Clayton Lockett. Lockett moaned in pain before authorities suspended the execution; he would die of a heart attack later that night. Archbishop Paul Coakley of Oklahoma City said at the time, “The execution of Clayton Lockett really highlights the brutality of the death penalty, and I hope it leads us to consider whether we should adopt a moratorium on the death penalty or even abolish it altogether.”

The Supreme Court has agreed with Archbishop Coakley and will consider the issue. We join our bishops in hoping the Court will reach the conclusion that it is time for our nation to embody its commitment to the right-to-life by abolishing the death penalty once and for all.

"Even in the case of the death penalty the State does not dispose of the individual’s right to life. Rather public authority limits itself to depriving the offender of the good of life in expiation for his guilt, after he, through his crime, deprived himself of his own right to life."
– Address to the First International Congress of Histopathology of the Nervous System (14 Sep 1952)

And the Catechism of the Council of Trent teaches us:

"The just use of this power, far from involving the crime of murder, is an act of paramount obedience to this Commandment which prohibits murder. The end of the Commandment is the preservation and security of human life. Now the punishments inflicted by the civil authority, which is the legitimate avenger of crime, naturally tend to this end, since they give security to life by repressing outrage and violence."
– Part III, 5, n. 4 (1566)

Both texts seem to align well with Gen 9:6.