A Nation of Immigrants

A Nation of Immigrants 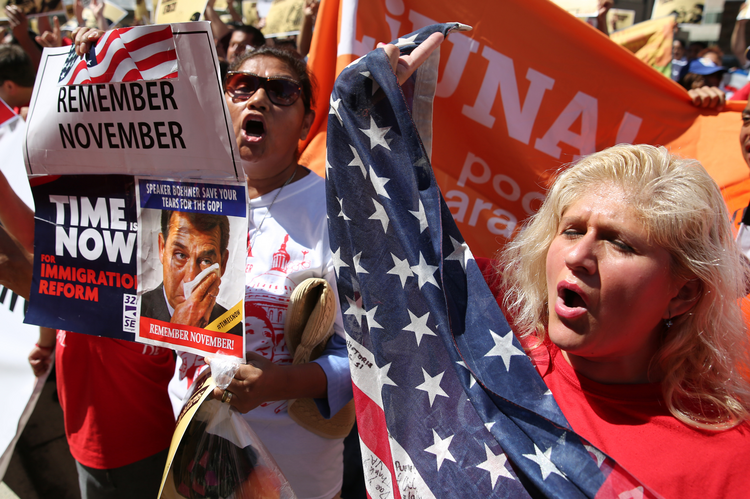 It is a shame that opponents of immigration reform appear ready to erase “Give me your tired, your poor, your huddled masses” from the Statue of Liberty rather than come to terms with the undocumented immigrants in our midst.

Faced with mounting frustration over the House of Representatives’ refusal to consider the immigration reform bill passed by the Senate over a year ago, President Obama, after much deliberation and tactical delay, announced he will use the powers of his office to confront the crisis. Defenders of the move note that Presidents Reagan and Bush Sr. took similar, though less far-reaching executive action to extend deportation protection to the spouses and children of those who received amnesty under the 1986 immigration law. And President Obama, himself a constitutional lawyer, released a letter signed by some of the nation’s top legal scholars affirming the legality of his policy.

The executive order grants temporary legal status to parents of U.S. citizens as well as to those who have been here for at least five years. Those who pass background checks and pay taxes will be able to get work permits. It also expands eligibility for the 2012 Deferred Action for Childhood Arrivals program targeted at the so-called dreamers, who were brought into the country as children. The action will strengthen border security and make it easier for highly skilled immigrants to enter and remain. For those who oppose these measures, the president had one answer: “Pass a bill.”

The bill in question, the Border Security, Economic Opportunity, and Immigrant Modernization Act (S. 744) passed by the Senate on June 27, 2013, would tighten border security, make changes in the family and employment-based visa categories and streamline the current legal system. Most important, it would create a tough but fair legalization path for the 11 million undocumented persons now in the United States, allowing them to come out of the shadows without fear of deportation under a future administration. It would also increase criminal penalties for certain activities, making it difficult or impossible for someone guilty of repeated drunk driving, gang activity or domestic violence, passport fraud or identity theft to become a legal resident.

In his address President Obama reminded us that immigration has shaped our national character. He knows that “undocumented workers broke our immigration laws,” but he said throwing out millions of people is just not realistic, especially when so many are hard-working men and women supporting their families, worshiping in our churches and raising American-born children. “They are part of American life.”

Critics of the executive order raise legitimate concerns. Even those who agree with the president’s aim worry: What if this sets a precedent for future presidents to abuse power for less noble causes? Already executive action has killed militants and civilians through drone warfare, and the government has stretched its authority to eavesdrop on U.S. citizens. David Brooks, on PBS’s “NewsHour,” criticized the politics of the president’s “aggressive” approach, which he suggests will make comprehensive immigration reform “much less likely over the next five or 10 years.” Bill O’Keefe, vice president for advocacy at Catholic Relief Services, has said the order’s emphasis on border security is misguided, arguing that illegal immigration from Latin America will be stemmed only when the United States addresses the economic and political conditions that push people across borders.

Nevertheless, Seattle’s Auxiliary Bishop Eusebio Elizondo, chairman of the migration committee of the U.S. Conference of Catholic Bishops, said: “It would be derelict not to support administrative actions.... We are not guided by the latest headlines, but by the human tragedies that we see every day in our parishes and programs, where families are torn apart by enforcement actions especially.”

The Jesuits of the United States, Jesuit Refugee Service/USA and the Kino Border Initiative released a joint statement welcoming the extension of relief to “as many as five million of our community members.” But, they said, the president’s move “is only a first step, and we will continue to struggle for a day when all men, women and children who live within our communities are welcomed as full members of our nation.”

At base this is not only an American issue. Addressing the European Parliament in Strasbourg, Pope Francis rebuked the European Union for its treatment of immigrants. Pope John Paul II once called the E.U. a “beacon of civilization.” Pope Francis said it had become “elderly and haggard.” He was not scolding so much as challenging Europe to restore its vigor by accepting the immigrants that drift ashore seeking a better future. Morally as well as politically, the fates of refugees and immigrants are linked. The world is small. When Lady Liberty in New York Harbor lifts her lamp “beside the golden door,” she no longer speaks for us alone.

Show Comments (
3
)
Comments are automatically closed two weeks after an article's initial publication. See our comments policy for more.
Henry George
6 years ago
While in favour of legalising the status of all Undocumented Immigrants in the United States, must I, as a good Catholic, be in favour of open borders ? How are those who are un-employed in America and those paid a miserable wage ever to improve their economic status if they have to compete for jobs with and endless stream of Undocumented Immigrants ? I don't blame anyone for attempting to improve their situation in life but must a nation turn its back on its own citizens via an open door policy ? Yes, provide a way for those willing to work where, evidently, no American is willing to toil in such jobs, but don't forget those who are desperately poor in America and who have a right to a decent income even though the Elite of America would never hire them to be their Maids, their Nannies, their Gardeners...
John Adams
6 years ago
I believe it is more complex than a border fix. Shouldn't we ask, why do they come? I had the mistaken impression that back in the Clinton days that the Mexican farmers would be welcoming Free Trade... better for all I thought. US companies working on both sides of the border for the good of all. I see these "illegals" as more like refugees, fleeing from conditions, we as US citizens help create and maintain. We continually wash our hands like Pilate. The Los Angeles Times had a report out on the produce we buy from Mexico. Not pretty. They are not coming here to "improve" their situation, but are escaping a certain life of slavery that we she abhor. Here is a link to theTimes article (hope this is okay).....http://graphics.latimes.com/product-of-mexico-camps/
Ashley McKinless
6 years ago

Thanks for sharing, John. Jim McDermott, S.J., America's Los Angeles correspondent, had a blog post about the LA Times report back in December: http://americamagazine.org/content/dispatches/eat-fresh-die-hard-subway-wal-mart-whole-foods-and-plight-mexican-worker

This article also appeared in print, under the headline “A Nation of Immigrants,” in the January 5-12, 2015, issue.