In ‘Amoris Laetitia,’ Pope Francis celebrates the joy of love and the joy of the Gospel. 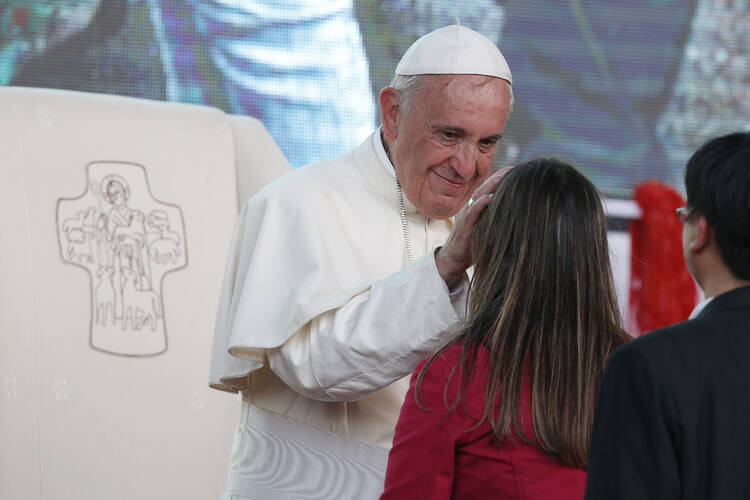 In his now-famous first interview with Antonio Spadaro, S.J., Pope Francis was asked which of the figures among the early Jesuits he found most appealing. He replied, “Ignatius Loyola” (no surprise there!) But then he mentioned another, less known personage, Peter Faber, one of the first companions of Ignatius. When asked what impressed him about Faber, the pope’s response was telling:

His dialogue with all, even the most remote, and even with his opponents, his simple piety, a certain naiveté perhaps … his careful interior discernment, the fact that he was a man capable of great and strong decisions but also capable of being so gentle and loving.

Faber had been proclaimed “Blessed” by Pius IX in 1872. On December 17, 2013 Pope Francis canonized him. Significantly the day was Francis’s own 77th birthday. It can be safely assumed that Francis considers Faber a special patron.

The pope offers a further characterization of Faber that is illuminating. He said in the interview: “Faber was a mystic.” As such Francis puts Faber in the company of Ignatius himself who, the pope insists, is “a mystic, not an ascetic.” And then Francis confessed: “I am rather close to the mystical movement” in the history of the Society of Jesus. Reading “Amoris Laetitia” in this light offers a somewhat different perspective upon the pope’s intent and hope. Francis seeks to probe deeper into the mystery of Christian marriage: beyond mere moralism to its mystical heart. He is more the mystagogue than the moralist.

Much of the commentary, both by those who see the document as an “opening” to further modifications not only of pastoral practice, but of church teaching itself, and by those who fear precisely this outcome, may have overlooked what is, in fact, Francis’s consuming evangelical commitment. Egregiously absent from so much of the commentary to date has been any sustained attention to the compelling Christocentrism of “Amoris Laetitia”—a neglect that sadly mirrors our contemporary catechetical and pastoral plight. In this respect it is crucial to read this apostolic exhortation in tandem with Francis’s earlier Exhortation, “Evangelii Gaudium,” as he himself signals in the central chapter 3: “Looking to Jesus: The Vocation of the Family.”

Both apostolic exhortations urgently stress the need to return to the church’s foundational kerygma as the wellspring of all teaching and pastoral discernment. With reference to family Francis writes:“In and among families, the Gospel message should always resound; the core of that message, the kerygma, is what is ‘most beautiful, most excellent, most appealing and at the same time most necessary’ …This message ‘has to occupy the center of all evangelizing activity.’ In effect, ‘all Christian formation consists of entering more deeply into the kerygma’” (No. 58, internal quotes from “Evangelii Gaudium”). That kergyma is, of course, the Good News of God’s love definitively revealed in the paschal mystery: the death and resurrection of the Lord Jesus Christ.

Our teaching on marriage and the family cannot fail to be inspired and transformed by this message of love and tenderness; otherwise, it becomes nothing more than the defense of a dry and lifeless doctrine. The mystery of the Christian family can be fully understood only in the light of the Father’s infinite love revealed in Christ, who gave himself up for our sake and who continues to dwell in our midst. I now wish to turn my gaze to the living Christ, who is at the heart of so many love stories, and to invoke the fire of the Spirit upon all the world’s families (No. 59).

Only by fixing one’s contemplative gaze upon the living Christ, only by “looking to Jesus, the pioneer and perfecter of faith” (Heb 12:2), does the Christian life finds its sure foundation. Only centered in the paschal mystery of Christ does Christian marriage take on its distinctive meaning, purpose and fulfillment. Thus the pope can write:

The sacrament of marriage is not a social convention, an empty ritual or merely the outward sign of a commitment. The sacrament is a gift given for the sanctification and salvation of the spouses, since “their mutual belonging is a real representation, through the sacramental sign, of the same relationship between Christ and the Church. The married couple are therefore a permanent reminder for the Church of what took place on the cross; they are for one another and for their children witnesses of the salvation in which they share through the sacrament.” Marriage is a vocation, inasmuch as it is a response to a specific call to experience conjugal love as an imperfect sign of the love between Christ and the Church (No. 72, internal quote from John Paul II’s “Familiaris Consortio”).

This contemplative, “Christic” understanding of Christian marriage and family life permeates chapter 4 of “Amoris Laetitia”: “Love in Marriage.” As astute spiritual guide, Francis offers an experiential and spiritual pondering of St. Paul’s “Hymn to Agape” in 1 Corinthians, chapter 13. The contemplative vision he sets forth does not endorse flight from the world, but promotes deeper immersion in the concreteness of everyday relationships with all their promise and pitfalls. His is a mysticism of encounter and relationship whose fullest earthly expression is the marriage sacrament. He writes:

Our reflection on Saint Paul’s hymn to love has prepared us to discuss conjugal love. This is the love between husband and wife, a love sanctified, enriched and illuminated by the grace of the sacrament of marriage. It is an “affective union”, spiritual and sacrificial, which combines the warmth of friendship and erotic passion, and endures long after emotions and passion subside… Infused by the Holy Spirit, this powerful love is a reflection of the unbroken covenant between Christ and humanity that culminated in his self-sacrifice on the cross. “The Spirit which the Lord pours forth gives a new heart and renders man and woman capable of loving one another as Christ loved us. Conjugal love reaches that fullness to which it is interiorly ordained: conjugal charity” (No. 120, internal quote from “Familiaris Consortio”).

Significantly, the above paragraph begins the section of chapter 4 entitled, “Growing in Conjugal Love.” Throughout the chapter the pope shows himself fully aware that growth in love, spiritual maturation toward holiness, is a gradual, often arduous accomplishment under the pervasive guidance of grace. But the growth lies, in this instance, in the married couple, not in the sacrament that consecrates and seals their union in Christ. An approach to marriage and family life that underscores the mystical more than the moral is not less challenging, but more. Authentic loving relations are infinitely more demanding than rules. The latter can be adhered to lifelessly; the former requires ongoing interior transformation. To this transformation husband and wife solemnly and sacramentally pledge themselves in Christian marriage.

As a discriminating spiritual director, Francis knows well the deceptions and counterfeits that obstruct the path to spiritual maturation and holiness. He demonstrated this vividly in the examination of conscience he presented in his well-known Christmas Address to the Roman Curia. As a Jesuit, schooled in Saint Ignatius’s Spiritual Exercises, he realizes the cost of true freedom and the ongoing configuration to Christ it entails. Hence he can write perceptively, in chapter 2, of the challenges facing families today:

...it is easy nowadays to confuse genuine freedom with the idea that each individual can act arbitrarily, as if there were no truths, values and principles to provide guidance, and everything were possible and permissible. The ideal of marriage, marked by a commitment to exclusivity and stability, is swept aside whenever it proves inconvenient or tiresome. The fear of loneliness and the desire for stability and fidelity exist side by side with a growing fear of entrapment in a relationship that could hamper the achievement of one’s personal goals (No. 34).

This realistic cultural assessment should not lead believers to disillusionment but to renewed discernment and commitment. The Christocentrism of the pope’s vision is never more clearly in view than when he confidently teaches:

If a family is centered on Christ, Christ will unify and illumine its entire life. Moments of pain and difficulty will be experienced in union with the Lord’s cross, and his closeness will make it possible to surmount them. In the darkest hours of a family’s life, union with Jesus in his abandonment can help avoid a breakup. Gradually, “with the grace of the Holy Spirit, [the spouses] grow in holiness through married life, also by sharing in the mystery of Christ’s cross, which transforms difficulties and sufferings into an offering of love” (No. 317, internal quote from final relatio).

Indeed, he boldly affirms that the spirituality of family life flowers fully in the mysticism of the everyday:

A positive experience of family communion is a true path to daily sanctification and mystical growth, a means for deeper union with God. The fraternal and communal demands of family life are an incentive to growth in openness of heart and thus to an ever fuller encounter with the Lord… Hence, those who have deep spiritual aspirations should not feel that the family detracts from their growth in the life of the Spirit, but rather see it as a path which the Lord is using to lead them to the heights of mystical union” (No. 316).

Living out “the fraternal and communal demands of family life” entails, of course, a joyful adhesion to the “Ten Words” that God gave to Moses to seal the Covenant with his people. Torah is not superseded in Christ, but brought to incarnational fulfillment.

With such a Christ-centered vision, at once contemplative and concrete, constant and ever new, it is little wonder that Pope Francis’s first and last word to the people of God, the members of the body of Christ, is joy—laetitia, gaudium. The joy of love, the joy of the Gospel. In truth, these two joys are but one.

The Rev. Robert P. Imbelli, a priest of the Archdiocese of New York, is Associate Professor of Theology Emeritus at Boston College.