Misunderstood Masterpiece: Salvador Dali's 'The Sacrament of the Last Supper'

Misunderstood Masterpiece: Salvador Dali's 'The Sacrament of the Last Supper' 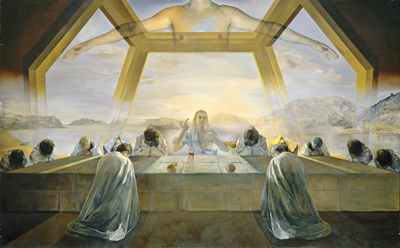 Since its purchase in 1956 by the National Gallery of Art in Washington, The Sacrament of the Last Supper, an oil painting by Salvador Dalí (1904-89), has replaced Pierre-Auguste Renoir’s “Girl With a Watering Can” as the museum’s most popular work (pushing her “into the mud” as Time magazine quipped). The popularity of Dalí’s image has persisted despite critical hostility toward the painting and the gallery’s own ambivalence. It hangs in a corner by the elevators.

Theologians, like the Protestants Francis Schaeffer and Paul Tillich, have also weighed in. For Schaeffer, Dalí’s image was a clear example of Christian meaning being lost to a vague existentialism: “This intangible Christ which Dalí painted is in sharp contrast to the bodies of the apostles who are physically solid in the picture. Dalí explained in his interviews that he had found a mystical meaning for life in the fact that things are made up of energy rather than solid mass. Because of this, for him there was a reason for a vault into an area of nonreason to give him the hope of meaning.”

Tillich’s view of the painting, conveyed during a lecture on religion and art, was reported by Time magazine: “Tillich deplored Dalí’s work as a sample of the very worst in ‘what is called the religious revival of today.’ The depiction of Jesus did not fool Tillich: ‘A sentimental but very good athlete on an American baseball team... The technique is a beautifying naturalism of the worst kind. I am horrified by it!’ Tillich added it all up: ‘Simply junk!’”

Both theologians misunderstood the image, however, as a depiction of the Last Supper. That is not surprising. Familiarity with the Leonardo da Vinci masterpiece causes most of us to make that leap when we encounter Jesus at table with 12 men around him. But Dalí has given us something more.

Dalí returned to the Catholic faith in 1949. His journey home had started years earlier when he found himself stirred by the poetry of of the Spanish mystic St. John of the Cross. Dalí’s first painting with an explicitly religious theme, the surrealist “Temptation of Saint Anthony,” appeared in 1946. By the time of his public embrace of Catholicism, however, Dalí had broken with the Surrealists (though he remains the most well-known of the Surrealist painters) and had announced his intention to “become classical,” combining Surrealist visual liberties with a High Renaissance treatment of the body.

Dalí was excited by the possibilities of expressing mystical ideas in light of new visions of reality made possible by nuclear physics. He dismissed the “science versus religion” dichotomy, noting “not a single philosophic, moral, aesthetic or biological discovery allows the denial of God.” His Surrealist art had been dominated by Freudian motifs, but from then on, his art would take on the Christian heritage in its content and depth. Dalí began to explore a mystical edge of Christianity that had been particularly challenged by a sterile view of modern science.

By placing Christ’s face at the center of the painting, which intersects with the horizon line, and by placing the sunlight’s source at that intersection point, the figure of Christ dominates “The Sacrament of the Last Supper.” The Christ then directs our eye upward to the figure that would otherwise dominate the painting, a giant torso whose arms span the width of the picture plane. This figure is likely the intended focus because our eye is directed around the canvas to this spot; both figures are transparent. Christ gestures with his left hand toward himself and with his right hand points to the figure above. He looks like a visual representation of Jesus’ reply to his disciple Philip, who asked at the Last Supper, “Lord, show us the Father….” “Don’t you know me, Philip, even after I have been among you such a long time?” Jesus replied, “Anyone who has seen me has seen the Father” (Jn 14:8-9).

The Father’s face is appropriately off the canvas; this is the transcendent God who warned Moses, “You cannot see my face, for no one may see me and live” (Ex 33:20). The full presence of the Triune God is made complete by the inclusion of an illusory Holy Spirit dove perched on Christ’s left shoulder, composed of the lines of his hair and jaw.

The setting is distinctive: a dodecahedron, or 12-sided space, that we perceive in the pentagon-shaped windowpanes behind the table. The architecture is also transparent. The dodecahedron is an ancient symbol of heaven, where this event is taking place. This is the realm of the Father, who casts a shadow on the otherwise invisible architecture. With his outstretched arms the Father embraces both heaven and earth.

Assuming traditional symbolism, we would identify those at table as the Twelve Apostles. A second look makes us question that assumption. For these are mirror images of one another: six sets of twins around the table, not the historical followers of Jesus. The figures painted here are not important for their personalities, but for their actions: their reverent prayer and worship. They direct their attention not to Christ, for he is not visibly seated with them, but toward the altar. What inspires their worship is set on the table, solid and casting shadows: the bread and the wine. This is the Eucharist, the sacrament of the Last Supper.

Instead of painting a historical Last Supper as Leonardo did, Dalí gives us the real presence of Christ in the Eucharist.

The real presence is a cornerstone of Catholic spirituality. The mystical aspect of the doctrine caught Dalí’s attention. The classic definition of a sacrament (a visible sign of an invisible reality) conveys well the Catholic understanding. On the table are the bread and wine. Also depicted is the invisible reality—Christ, the sacrament of God on earth, the Father in this mystical 12-sided heaven—truly and really present to those who receive him.

Prof. Novak's description and explanation here of Salvador Dali's monumental "Sacrament of the Last Supper" is one of the best I've ever read.

My wife saw this extraordinary canvas for the first time this summer; I've seen it during all of my five visits to Washington, D.C. She was completely mesmerized by it - as most people are. I seem to see something new in it every time.

It is said that the mathematics underlying the careful composition of this painting makes a viewer feel almost as if he or she is a part of the scene, not just someone looking upon the scene.

I might also opine that the headless torso represents not only the faceless God the Father, but also the Holy Spirit, and the ascending Christ.

Several years ago, when I complained to museum staff that this great picture ought to be more reverently displayed (it actually hung in the gift shop at the time!), I was told, and I quote: "If I had my druthers, it would be kept in the basement."

Jealousy over Dali is nothing new. His flamboyance and eccentricities aside, the man was a master painter and a genius. "The Sacrament of the Last Supper" is just one example that illustrates both of those facts. His detractors only wish they had Dali's vision, intellect, creativity, and technical talent.

7 years 12 months ago
Matthew says when evening came he reclined at the table “with the Twelve.” At the table Jesus identifies his Betrayer, then according to Matthew, Eucharist happened. Did the Betrayer remain at the table participating in the Words of Institution, or as John records once his identity was revealed, did the Betrayer do as Jesus said, “What thou dost do quickly” leaving the table before Institution? Mark,if taken literally indicates that after the Betrayer was identified , he stayed at the table participating in the First Eucharist. Luke has the Betrayer identified by Jesus as a “hand ... on the table,” after the Words of Institution had been said. So, was the Betrayer there for Eucharist?
Were Dali and also da Vinci placing the Twelve at “Sacrament of the Last Supper” or simply “The Last Supper” or as I prefer to call it, “The First Eucharist,” scripturally correct? I always assumed only Eleven were there based on what I understood John to be saying. Scripture scholar I am not, so I am likely interpreting wrongly.


Dali’s rendition make the Twelve heads tilt forward looking bewildered, perhaps at having just experienced the bombshell “One of you will betray me” announcement, followed by the unfathomable Eucharistic assertions,the full intent of both almost too much to handle! Or were their heads bowed in reverence totally grasping what had happened? Is that even possible?


Whatever the answer Dali’s “Sacrament of the Last Supper” appears mystical “not of this world” I feel like saying “mythical” but dare not! There is something attractive about it. Da Vinci’s brush I also like even though it is definitely not scripturally accurate as the Gospel says at “The First Eucharist” those at the table “reclined.” To “recline” one assumes a laid back position, not a sitting one.


There’s a certain piety in both renditions, but in my humble opinion neither Dali, or da Vinci got it right. Yet I like them both. Spirituality enhances both.
Robert Killoren
7 years 11 months ago

The painting hung in the stairwell outside of the gift shop for all the times I visited the museum. Wherever it is, I wouldn't make a trip there without stopping by to see this work. As art I find it stunning. The transparency of solid objects is visually intriguing. How did he do that? It is a very large painting and quite imposing when viewed up close. There's such an etherealness to the work I cannot help but see this as a mystical experience rather than as something "real." With that in mind a lot of the objections rapidly fade away. The word sacrament supports this... the painting has a transcendent aspect to it that feels like a doorway to the holy, which is what sacrament means. The Sea of Galilee is obviously not near Jerusalem, the site of the Last Supper, but recalling the Gospel of John there was a resurrection event on the shores of the Sea that involved Christ sharing bread and fish. I can't help but link that story with the painting as well. The risen Christ is present everywhere, thus the large image of the resurrected Christ floating above all. The figures around the table represent the Apostles, but since they have no face any one of us can put ourselves around the table, and perhaps it represents Christ's disciples from all time drawn to him in the Eucharist.

This article also appeared in print, under the headline “Misunderstood Masterpiece,” in the November 5, 2012, issue.