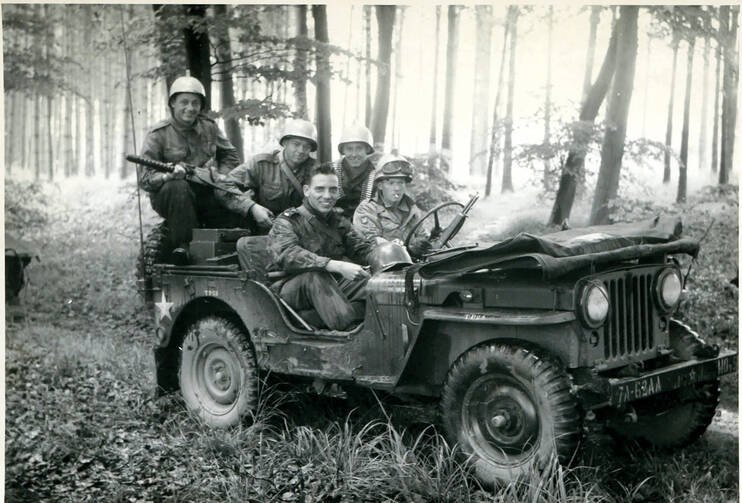 When I arrived at Fordham University in the fall of 1951, I automatically signed up for the Reserve Officers’ Training Corps. That I would eventually go into the United States Army had been long understood. The Korean War was raging. Since I felt I would inevitably be drafted, I wanted to enter on my own terms and to be an officer, and the program would take me through college before sending me abroad. Besides, the army was in my blood. My father had won the Distinguished Service Cross in World War I; he had taught my younger brother Dave and me to ride polo ponies at the 112th Field Artillery base outside Trenton, N.J., when we were 3 years old; his friends were in the American Legion; we displayed our enormous American flag on holidays; and he had taken us to see “Sergeant York” and “Wilson” at an impressionable age.

Meanwhile the Jesuits I had admired at Saint Joseph’s Prep in Philadelphia and some whom I encountered at Fordham were convinced I should join them, and their letters during the Fordham years kept stirring the embers of a vocation. Finally my mentor, the historian Joseph R. Frese, S.J., whose Mass I served every morning except during my junior year, when I was away in Paris, told me that the well-meaning recruiters had no right to push me, that if I were to join I would know when the time came.

After graduation, tensions between religious ideals and military culture surfaced at Officers Training School at Fort Bliss, Tex. Juarez, Mexico, today famous for its mass graves of drug lords’ enemies, was then the soldiers’ weekend playground, with its striptease bars and brothels and boys selling their sisters on the streets. I was appalled that some of my fellow student-officers seemed to have no religious principles or even intellectual curiosity; one told me that religion and politics were two subjects that no officer should discuss. Since they were the topics that most interested me, that remark would leave me speechless for two years. Fortunately, I became friends with some recruits from Boston College.

I wrote to my father about this, and he replied that I should withhold judgment on my comrades: on the battlefield my life would depend on these very men. More serious was the pep talk we received in which the speaker reminded us of the fundamental principle that should guide us: We are hired killers.

If I remember correctly, I wore my 2nd lieutenant’s uniform to Christmas Midnight Mass at the Trenton Cathedral in 1955, a week before I was to fly to Germany and report to the 62nd Antiaircraft Artillery Battalion in Mannheim and take responsibility for four 50-caliber machine guns mounted in turrets on half-tracks and four 40 mm. antiaircraft guns mounted on tank bodies—all manned by a platoon of 50 men. But the vocation bug still surfaced from time to time. I had a girlfriend, whom I loved, named Sally, but I was not in a strong position to pursue her. As the organ roared and the choir soared, the Bishop of Trenton began his solemn procession down the aisle. Although my journalist father told me years later that this bishop would be partly reformed by the Second Vatican Council, he was known then for an almost fascist rigidity. He was overweight and, to my eyes, exuded pomposity. I offered a silent prayer of thanks that I was attracted to the Jesuits, whose rules excluded ambition to hierarchical status.

The two years in Germany were exhilarating. On the first day our battalion commander, a colonel, motivated the new officers with his conviction that the Russians would attack that winter. The idea that we might soon be required to kill hundreds of other young men never gelled. I believed that our cause was just, and we had to do what was necessary. The colonel brought me onto his staff after a short term as a platoon leader to be the battalion communications officer. When we pulled out of the barracks for a major, several-day training maneuver—the Hungarian uprising seemed to offer an opportunity for those among my colleagues who needed a war—I was assigned the role of leader of the “aggressors.”

In a war game, the aggressors attack the main encampment to challenge its security. I took my role as “enemy” serioiusly and was determined to take the battalion by surprise. So in the darkest night I led my aggressor troops silently through a German forest, undetected, to the sleeping camp and charged in. I heaved a tear gas bomb into a nearby tent. The battle was ours. But in that tent the tear gas had taken a lieutenant by surprise and he had gone into shock.

We bundled his unconscious form into the back of a Jeep and drove through the night to the nearest hospital. It was the longest drive of my life. Yes, they should have been ready for an enemy tear-gas attack, but this man was trapped in an enclosed space. I was responsible for whatever happened. Had I killed my first man? With his silent body beside me I prayed: “God, if you want me to become a Jesuit, don’t let this man die.”

He did not die. The next day we both went back to work. But if he had not recovered, my future as either a soldier or a Jesuit would have disintegrated. In the year ahead, as Korea was replaced by Vietnam, I realized slowly that, because of my father’s background, it had never occurred to me that the United States could wage an unjust war. But during theology studies at Woodstock during the 1960s, influenced by what I read in The National Catholic Reporter and Commonweal and what I learned from my fellow young Jesuits, I slowly realized the time had come to be ashamed of the foreign policy of the nation I had served in uniform.

Covering the anti-war demonstrations at the Democratic National Conventions in Chicago for America in 1968, I was tear-gassed by the Chicago police and staggered to a fountain in Grant Park to wash my eyes. Four years later, I visited my family when President Nixon and Secretary of State Kissinger were ordering the mass bombing of Hanoi. My father, then 82, a man who had tried to re-enlist after Pearl Harbor and whose patriotism had forced him to support every war, had changed. I just remember him shaking his head sadly and, with a heavy sigh, saying, “All those lives.”

My mind flashed back to 1957, when I returned from Germany and informed my parents that I was joining the Jesuits. My mother was not surprised; my father was stung. It had never entered his mind. Not long after, one day in the car I looked at his face and saw something I had never seen before—his tears.

But by 1967, my father had proudly celebrated my ordination. By 1972 his heart was failing. In August 1976 I was teaching at Fordham, and on a visit home I quietly announced at dinner that I would take final vows in the Fordham Jesuit chapel. I said I had not told them earlier because it was not a “big event” and I didn’t want my father, with his illness, to risk the trip up from Trenton.

He pulled himself up straight in his chair and said, “I’ll come if I have to come on a stretcher.” He died one year later.

Raymond A. Schroth, S.J., is literary editor of America. Another version of this essay appears in Transitions in the Lives of Jesuits and Former Jesuits (Amazon).

Show Comments (
3
)
Comments are automatically closed two weeks after an article's initial publication. See our comments policy for more.
Joseph Keffer
8 years 1 month ago
Thank you, Ray. As one of Dave's classmates and a close friend, I know you. Thank you for pursuing your vocation. May God continue to bless you. Keep up your good work with America which I follow weekly. Joe Keffer Blessed Sacrament Parish in the 50's!
Bob Baker
8 years ago
Like you, I came from a family with a military heritage: an uncle and a grandfather in the US Navy during WWII and my father catching the very end of WWII in the US Army. My father stayed in the service after the war, went to Korea and Vietnam twice, in fact he was on leave after returning from his second tour as I was on leave going to my one time in Vietnam. A very long war, but for most of us, when our country called, it was expected you'd go (the boys running off to Canada, obtaining draft deferments for school or marriage, etc, just wasn't done by most men, despite popular media portrayals). I'm not sure why it is, but spending time in the service is "clarifying" as one enters adulthood.
Bob Phillips
8 years ago
Father Ray, Have enjoyed reading your books on Fordham, Sevareid and Drinan. Hope that Pope Francis will bring women and laymen into the Churches decision making fold as you championed a few years ago. Your friend and fan, Bob Phillips, suite mate of your late brother Dave.