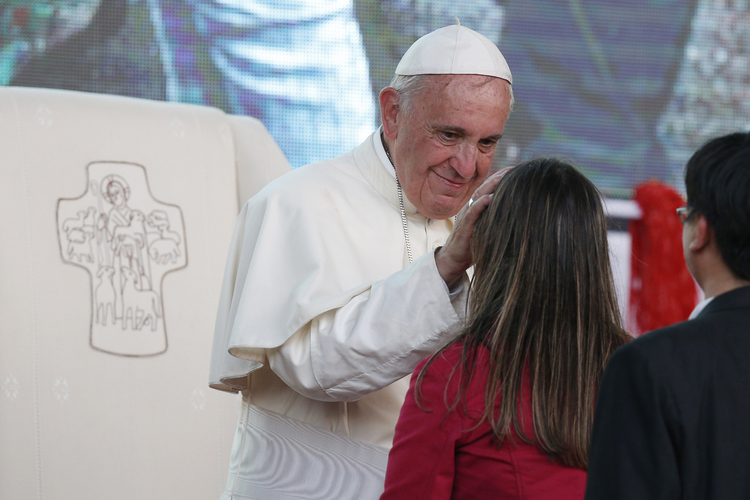 “How much the world needs tenderness today!"

— Pope Francis (Homily for Midnight Mass on the Solemnity of Christmas, December 24, 2014)

The tone of the working document released by the Vatican in preparation for the upcoming synodal assembly, entitled “The Vocation and Mission of the Family in the Church and the Contemporary World,” can be distilled into one word: tenderness. To say that tenderness can solve all our problems is an oversimplification, but truth is often quite simple.

The synod document is more complicated, of course. Its aims are lofty and comforting at the same time. We married folks are touchy about the way marriage is sometimes portrayed as a sort of consolation sacrament: the one you do when you have no vocation to the priesthood or religious life. But the document elevates the vocation and mission of the family and our sacrament of marriage to a refreshing equality of holiness. As couples, and as families, we too must discern our vocation, our part in offering the tenderness of Jesus to a wounded world. We too are missionaries to the people whom our lives touch.

We have an openhearted role model in Pope Francis, who embraces the world in all her tawdriness and tells her, sincerely and tenderly, that he loves her and God loves her. He reminds us that we all are capable of, and called to, great joy. Love first; ask questions later, he seems to say, which the document calls the pope’s “pastoral creativity.”

The document takes care to include the many configurations of the modern family. The Cleavers long ago gave way to the Simpsons, although I would note that the Simpsons are an intact family. Our families have always had skeletons. We have addictions, imperfections, mental illnesses, felony records, feuds, rivalries, mean streets, sketchy pasts. Our families include divorced and remarried members, gay and lesbian members, non-practicing and nonreligious members. Most of us are never going to be Ozzie and Harriet. To be honest, most of us would never want to be Ozzie and Harriet. And the church, rather than holding up an impossible paradigm, needs to say, “Come right in. You are welcome here. Because everyone here has all of those things, too.” We say in our handouts that God does not abandon anyone, but then we as church often do abandon those who threaten our sense of secure righteousness.

The document in many places directs the people of God to act with joy and tenderness towards each other, but people being people, the challenge is to imbue those who represent the church with this outlook. The faithful who work in our parishes, who attend Sunday Mass regularly, who publicly identify as Catholic, are the spiritual boots on the ground. We have the power to convert people and the power to repel people. I am thinking of a friend who left Mass near tears many years ago, because of the people in the pews who gave her the stink eye when her little girl, who had autism, made weird sounds. She has not gone back to that parish. Conversely, I know a priest who invited a man with limited mental capacity, who had been waving his arms fervently from the front pew during Mass every time the choir sang, to come forward and conduct the choir for the recessional. My friend was treated as “other.” The would-be conductor was treated as family. The latter is our sacred call.

An essential, lasting quality of being a family is that, in good times and bad, for richer, for poorer, in sickness and in health, the family members have each other’s back. As the extended family of church, then, the question is: How do we have people’s backs? How do we welcome the many potential members of our family? Do we err on the side of love or on the side of the rules? Do we require people to jump through Catholic hoops, or do we accompany them on their walk, like Jesus with his loved ones on the road to Emmaus? We may need a radical change of mindset.

The world needs tenderness, which is the manifestation of selfless love, of self-giving, of sensitivity to the needs of others, of careful, mindful respect. The tenderness with which a parent loves a child is simple but powerful. The document understands the Christian family’s vocation and mission to be a tender balm to a world that is hurt and broken, rather than to add salt to the world’s wounds. Our tools are grace, the Eucharist, and the Holy Spirit. “Do we have the courage,” asks Pope Francis, “to welcome with tenderness the difficulties and problems of those who are near to us, or do we prefer impersonal solutions, perhaps effective but devoid of the warmth of the Gospel?”

Love me tender, says God. Take me to your heart.