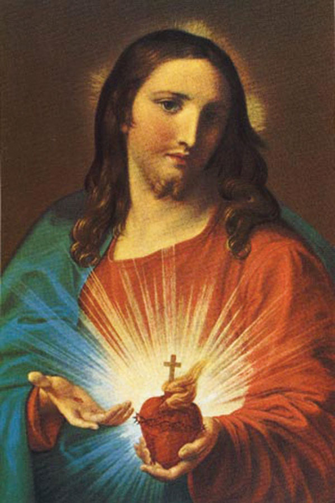 One of the strongest images I have of my paternal grandparents’ home in east Tennessee is of a rather large print of the Sacred Heart of Jesus that hung at the far end of their hallway. My grandmother told me that she and Grandpa had received it as a wedding gift in 1946. It had been hanging in the same spot since the early 1950s and, as far as I could tell, it was probably forgotten about as soon as the job of hanging it was finished. As with so many things in our lives, those that are familiar and comfortable eventually become invisible. I don’t quite know if the old expression, “familiarity breeds contempt,” is always true, but in this case familiarity had bred benign neglect.

For most of us, the church’s annual celebration of the Solemnity of the Sacred Heart of Jesus is like that print in my grandparents’ house. If we are aware of it at all, it is probably little more than a point of nostalgia, a connection with a past that is both comfortable and familiar, but also disconnected from day-to-day life. And yet, the image of the Sacred Heart of Jesus has, over the centuries, become an undeniable part of our Catholic identity. Just like that picture hanging in my grandparents’ hallway, this feast (and the devotions associated with it) tells us something about ourselves and our “family’s” story.

Every age produces its own particular expressions of Christian truth. Although we might be embarrassed by some of the sweet and unsophisticated devotions of the past, including highly sentimentalized devotions associated with the Sacred Heart, we should also remember that the theological truths behind these “family traditions” are quite important.

Devotion to the Sacred Heart of Jesus first developed in the late Middle Ages. This was a time when Christ was most often depicted as the Divine Judge, ready to pour out wrath and retribution on the unrepentant sinner. It was the great women mystics, like St. Hildegard of Bingen and St. Gertrude the Great, who were among the first to imagine a new way of understanding who and what Christ is and could be for us.

The church’s solemn celebration of the mystery of the Sacred Heart is not really about any artistic representation of Jesus or even about private revelations to mystics, like St. Margaret Mary Alacoque or the Jesuit priest Blessed Bernardo Francisco de Hoyos, who were among the great promoters of this devotion. The celebration invites us to rejoice in the way divine love was made human and vulnerable in Jesus of Nazareth. The reality of this love in Jesus was what drew so many to him during his earthly life. Romano Guardini, a 20th-century theologian, wrote:

The children must have loved coming to Him, otherwise their mothers would never have brought them…. Anyone with whom children like to be, who understands how to get along with them, knows what to say to them; anyone good with children and animals—for He used to love animals too, it showed in the metaphors He used—is a person with the breath of Paradise hovering over him.

The sick came streaming to Him. It reveals a great deal about a man if the suffering press themselves upon Him because they feel they are welcome to do so…. They kept coming to Jesus, from every corner. From the side streets and hovels. From all sides, this dark, embittered army pressed upon Him. He laid His hands upon them, raised them up, touched them, cleansed them, made them whole.

Jesus’ reaction to the nine ungrateful lepers, his weeping over Jerusalem, his grief at the death of Lazarus, his love for Martha and Mary and his reaction to the betrayal by Judas and the fear of the other apostles all reveal the love and vulnerability of Jesus.

In Jesus, God became a human being who was able to touch, support, comfort and heal all those he met, regardless of their place in the world, their moral standing or how attractive they were. As the late Cardinal Basil Hume observed, this tells us something about God: “God has this individual concern for me, irrespective of my weakness, and irrespective of my shortcomings.”

Love is always giving of itself; it requires self-sacrifice. This is why the Sacred Heart of Jesus is so often depicted as a heart on fire, burning itself out with love. That was the great lesson of Jesus as he hung upon the Cross. John’s well-known teaching is a reflection on this great gift: “In this way the love of God was revealed to us: God sent his only Son into the world so that we might have life through him” (1 Jn 4:9). God’s heart calls to our hearts, inviting us to come out of ourselves, to trust in him and, following the example of Jesus, to offer our love, our lives, as a gift: “This is my commandment, love one another as I have loved you” (Jn 15:12).

Silas Henderson, O.S.B., a Benedictine monk of Saint Meinrad Archabbey in Indiana, is the author of From Season to Season: A Book of Saintly Wisdom.