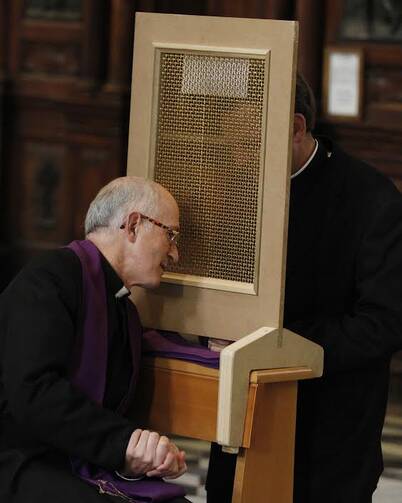 In recent years, U.S. Catholics have struggled to accept the harsh reality that some priests committed terrible acts even as they helped and worked alongside many good people.

This struggle has been especially pronounced in the Legion of Christ, a congregation of priests that fell from the height of Vatican favor to the brink of collapse after Pope Benedict XVI removed its founder Father Marcial Maciel from public ministry in 2006. The move followed revelations that Maciel had sexually abused many of his seminarians, fathered children out of wedlock and embezzled money to support a drug addiction.

Joshua Mercer, co-founder and political director of CatholicVote.org, is a layman who served five years as political correspondent for the National Catholic Register, which at the time was owned by the Legion. In 2004 he resigned from his job due to concerns that the allegations of sex abuse against Maciel were being ignored. His decision came two years before Maciel’s disgrace and seven years before the Legion sold the newspaper to EWTN News.

“In the years I was there, I found the zeal toward Father Maciel to be misplaced,” Mercer told America. “I had never even heard of him before and they acted like he was more important than Pope John Paul II.”

In an effort to renew the order, retool its image and win back the trust of Catholics, the Legion met in January to elect a new general director and submit a revised constitution to Pope Francis.

Father Shane Johnson, L.C., a priest at St. Peter’s parish in New York, said he felt hopeful about the Legion’s potential to endure under the oversight of Francis.

“We’re generally pleased with the way the constitutions turned out,” Father Johnson told America. “It’s been a good process and a healing process, allowing us to take ownership of some things and purify some things we’ve started to realize were off-kilter. All of this helps us focus on what’s essential in our relationship with our Lord and in our relationships with the people we serve.”

Still, such processes take time. Six months after the general chapter, the Vatican has yet to approve the new constitution. And this week the Vatican showed additional signs of hesitation. On June 24, the Legion’s new general director Father Eduardo Robles Gil, L.C., announced that the Vatican will appoint a papal advisor for the troubled congregation. The advisor will assume office on July 3, when he is scheduled to meet with Legion officials and propose minor corrections to the constitution.

Jim Fair, U.S.-based Legion spokesman, emphasized a Vatican statement confirming that the new advisor is a consultant whose job of assessing the congregation’s progress will not involve governance.

“The Legion is clarifying and purifying itself, not so much a reinvention as a refining,” Fair told America in an email. “It has required much faith and hard work and we are seeing the results in the positive spirit of our people.”

But Father Robert J. Araujo, S.J., a lawyer who is former attaché to the Vatican diplomatic service and former advisor to the Holy See, suggested there still might be some issues that will concern the Vatican.

"The Legion is trying to reorganize and they seem to have some sympathy in the Vatican, but there are also grave concerns which outweigh the sympathy,” Father Araujo told America. “In the case of the Legion, the founder is so tainted that we have to ask whether the charism of the institute’s foundation is so tainted that they have to start over again, and I’m not sure a decision has been made on that.”

The appointment of a papal advisor is the latest development in the Vatican’s effort to address the ongoing departures from the Legion’s clerical and lay ranks.

The Legion, founded by Maciel in Mexico in 1941, currently operates religious works in 22 countries. In December 2012 it reported having three bishops, 953 priests, 945 seminarians—including minor seminarians in their teens—and 2,833 non-member students in its apostolic schools worldwide. By the end of December 2013, the Legion had added one bishop and one priest to these totals, but the other numbers had decreased. The Legion now reports 836 seminarians and 2,739 students in its schools.

Many laypeople affiliated with the Legion and with its lay branch Regnum Christi have described individual Legionary priests as hardworking and holy, but have struggled to maintain their trust in the congregation’s institutional hierarchy.

“It's a difficult situation,” said Mercer. “The founder of this religious order was not only unsaintly, he was a monster. But you have this order with hundreds and hundreds of priests and brothers. What do you do? Where do they go?”

Mercer said Pope Benedict and Pope Francis have adopted a smart strategy by essentially freezing the organization. In delaying approval of the new constitution, he suggested that Francis might be giving more Legionary priests the chance to join another order or a diocese.

“The fact that Francis has appointed another advisor might suggest that he wants to keep the Legion as a shell and eventually let it die as priests continue to leave,” Mercer said.

He added that he believed the congregation to be beyond reform since the founder had conceived it with the direct intention of getting away with “a host of unrepentant sins.”

In the United States, the Legion already has lost monetary support from Catholic donors, leading it to shutter some of its fledgling schools. One dramatic example was that of Southern Catholic College in Georgia, which in 2010 closed in the middle of the spring semester as financial support for the school quickly evaporated. Faculty lost their jobs as students transferred to other schools, including Ave Maria University in Florida.

Mercer said he admired the number of apostolates the Legion had been inspired to start, but found the cult-like zeal of Legionaries to be emotionally and intellectually disordered, particularly during the first year of his job when he worked full-time at the Register headquarters in Connecticut.

“When articles about accusations would appear, the response was: ‘This is just proof that our enemies don't like our work’ or other such self-comforting talk,” Mercer said. “It was unreal.”

By 2004, Mercer had read enough articles on Maciel to become convinced that the accusations were sufficient reason to end his association with the Legion. He left his job at the newspaper on good terms and maintained friendships with several of the staff members.

Despite the lingering mistrust of many Catholics, Legion officials remain optimistic about the future, noting that Pope Francis has shown great paternal concern for the organization.

Fair said a benefit of the past three years’ reform has been tighter collaboration among different branches of the Legion family: Legionaries, consecrated women, consecrated men and laypeople.

He added: “But we also realize that it will take time for us to demonstrate to others that we are worthy of their trust. Trust is earned over time and we pray that people will give us the opportunity to show how we can serve the Church.”

Yet the Legion’s history with regard to Maciel creates many obstacles to overcome while earning back that trust. Upon his election to the papacy, Pope Benedict XVI immediately launched an investigation into Maciel that culminated with his 2006 enforced retirement amid charges of breaches in clerical celibacy. After years of denials and evasions, the Legion finally acknowledged the truth of some allegations in 2009, months after Maciel died in Florida and was buried in Mexico.

That same year, Pope Benedict XVI appointed Cardinal Velasio de Paolis as his delegate to supervise a thorough reform of the Legion, which de Paolis completed in January with his oversight of the general chapter that approved the new constitution for submission to Pope Francis.

There are still some issues to be addressed. Prior to the Vatican taking over the congregation in 2010, Legionary priests had been noted for their strict fidelity to the pope and rigid discipline, rooted in secretive methods of training that had drawn criticism from many quarters. Setting up schools and minor seminaries all over the world, Legionary priests cultivated vocations among boys starting at age 12, but frequently were accused of cult-like indoctrination by ex-members.

According to Fair, there are at least two concrete examples of how the new constitution will correct many of these problems. First, from an internal governance standpoint, the consecrated branches now have their own governance and the lay members are working toward the same. Second, from an external standpoint the Legion is working toward a greater level of openness and transparency.

“You can see that just by visiting our websites,” Fair told America. “All the output documents from the general chapter are posted there, as will be the constitutions after they are approved.”

Fair acknowledged that the Legion must work hard to win back the trust of the people it desires to serve, making significant changes in organizational structures and seminary curriculum very soon.

“There is much work ahead. If you read through the chapter documents you realize that they are a series of assignments for our new general director and his team to carry out during his six-year term.”

It remains to be seen whether the Legion’s new architects are laboring in vain to build the house.

Sean Salai, S.J., is a summer 2014 intern serving as associate editor at America.

Show Comments (
1
)
Comments are automatically closed two weeks after an article's initial publication. See our comments policy for more.
Bruce Snowden
7 years 7 months ago
The Holy See should simply suppress the whole dammed thing! The Legionaires of Christ are cultists conceived in evil and nurtured in the sins of Marciel. Their priest should be given the choice of diocese, another Religious Orders, or laicized. Their Bishops? Carefully monitor them! Let's hope the incredible mercy of God s saved Marciel from the hell of "everlasting death" God grant this! May lay and clerical admirers who got pulled into the whirlpool of Marciel's lies and lust, find compassionate acceptance and a blessed ministry else where in the Church. It's such a mess!