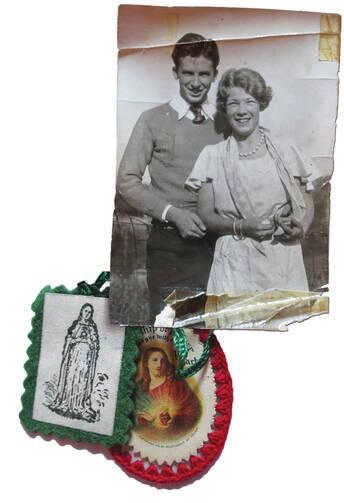 Some years before my father died, he and my stepmother moved into a retirement community, one of the nicer chains bordering Chicago. To help them downsize from their condo of 24 years, I spent an afternoon with my father in his “office,” going through the contents of a desk as teetering as the old man himself. Now 91 and legally blind for the past five years, he had been using it as a table—its chipped and rectangular surface now covered with bills and insurance claims, a stash of small rusty penknives and bundled ballpoint pens he had copped from local banks.

From five of the six drawers, we retrieved old receipts, blank envelopes and bank statements. From the sixth, the double-deep drawer on the right, I pulled out a disordered pile of my father’s personal papers: family letters, including one from a long-dead cousin; correspondence about his 60th high school reunion; office memos he’d written decades earlier while a salesman at a printing ink firm. That was the job that had brought him and my mother to Chicago from Philadelphia in 1939, a move that would forever darken their marriage and our family’s life.

Tucked back in the corner of the drawer was a small photo wallet, bright pink and bound with a thin gold-plated clasp.

“What’s this?” I asked my father, holding it close to his clouded eyes.

“What is it?” he said, reaching out a bony hand to touch it.

“Oh,” my father said flatly, perhaps, like me, unable to comprehend what it was doing there, my mother long dead and buried these past 40 years.

“Can I have it?” I asked, barely hiding my excitement.

“Sure. What else is in the drawer?”

My mother loved hanging out in bars. When I was young, she belonged to two bowling leagues, both sponsored by bars, working-class suburban joints near where we lived. And while she was more upper-middle class, my mother nestled easily among those with whom she bowled and drank: truck drivers, plumbers, nurse’s aides—more my father’s people, the kind he was trying to escape.

Later on the day I found my mother’s wallet, I sat in Punky’s, a corner bar near the train that would take me back to the city. It was near 5 p.m. on a weekday, and the place was just beginning to fill up with the regulars, who came to play pool and listen to country music from the jukebox. I sat on a stool near the window, the buzz of the indoor neon sign louder than Dolly Parton’s vow of eternal love, and carefully opened the wallet.

Of the 30 plastic sleeves, only six were filled, all at one end. In the first was a two-year pocket calendar, 1962 on one side, 1961 on the other. During those years I would graduate from high school, and my mother would be closer to dying from breast cancer.

Following were sleeves of old photos, including two of me from high school, and one of my mother’s father, Bill—or Poppity, as we called him. He is standing in front of a vine-covered cottage, somewhere near Philadelphia, looking straight into the camera, a handsome white-haired man in his 60s, dressed in a white shirt and broad tie, a neutral expression on his face.

My mother was crazy about her father, though I recall little about him, or the rest of my relatives “back East.” My parents had left home to make their life in the Midwest, a young couple in their mid-20s, with a toddler son and earnest hopes in tow. How they must have loved each other then, I think, trying to erase from my mind the rancor and drink-fueled mayhem of their later years, and how that must have given my mother the courage to leave behind everyone else she loved.

Facing Poppity was a photo of him with my grandmother, the formidable and bosomy Mae, standing tall and straight next to him in dark sunglasses and flowered silk dress, her white purse pressed close to her side. They are on the boardwalk in Atlantic City, the iconic place of my childhood, where each summer my parents, my brother and I made the long drive from Chicago, stopping off in Philly to collect the relatives who would join us in our rented apartment at the shore. Maybe my mother’s much beloved niece and her new husband would come along. Or my father’s brother and his family, so similar to my own in the toll that drinking would take on their lives.

It was on those annual summer trips that we would be part of an extended family, if only for two short weeks. How exotic they all seemed to me—these blood relatives I hardly resembled, their very speech sounding foreign, my own flat Midwestern vowels a cause for laughter among them.

Then, crammed into the final sleeve of my mother’s wallet, were two cloth medallions: a black and white Virgin Mary and the blood red Sacred Heart of Jesus. They sit among the familiar rest, jarring and incongruous.

I was the product of a “mixed” marriage in the 1950s, forbidden by my father’s Catholic teachings to know anything of my mother’s Lutheran faith, though of course I would try. One bright Sunday morning—I was not yet 10—as my mother dressed for church, I asked to go with her, to see this secret place where my brother and I were not allowed, as if the air itself would corrode our very souls.

With little emotion, she told me no, a slight bitterness in her voice, as if I were to blame for the devil’s pact she’d made when marrying my father, agreeing among other things not to interfere in the “moral upbringing” of her own children. As if a mother could even do that. As if it could be done by barring the children from the place where their mother sought spiritual comfort.

I sometimes blame my own bitterness on having watched our small family unravel—and at such an early age—from the wedge that religion drove between my parents, and from the drink that followed or preceded or accompanied that wedge.

But in the end, none of it mattered. When my mother was diagnosed with breast cancer at the age of 45, my parents drew together. And for years after her death, my father would say—even when remarried, my Italian Catholic stepmother just out of earshot—“I fell in love with a dying woman!”

And each time he’d say that, I’d see him again at my mother’s hospital bedside, leaning forward in his chair, her small hand tight in his. It was as if the long contentious years of their marriage had melted away and they were back there again in Philadelphia, where, young and beautiful, they believed they could cross the country together, cross even the great divides of religion and class, newly wed and buoyed by nothing more than the generosity of their love.

And it was in that same spirit of generosity—relit by the cauldron of cancer—that my mother freely gave my father the gift he had been praying for all their married life, one that she had just as earnestly resisted: She became a convert to his faith. And when together they knelt at the altar in the small hospital chapel where she took her First Communion, there wasn’t, truly, a dry eye in the house.

The clack of pool balls returns me to the smoky present of the now-jammed bar. I close my mother’s wallet and make my way out to the train platform, the sharp smell of booze and smoke mixing in my memory with those of incense and death.

My mother resented dying young for many reasons, among them that I’d be left without her to negotiate the uncertain passage into womanhood. She had learned a great deal in the last five years of her life—hard lessons about love, and especially about forgiveness, that I know she wanted to pass on.

Those holy medallions mashed into the cracked sleeve of her wallet made me think that perhaps—close to 40 years later—she had.

Carol LaChapelle, a Chicago-based writer who conducts writing workshops and blogs about the Boomer-and-beyond life at On the Geezer Beat, is the author of Finding Your Voice, Telling Your Stories.