Questions of domestic violence do not just affect individual families but the larger society. 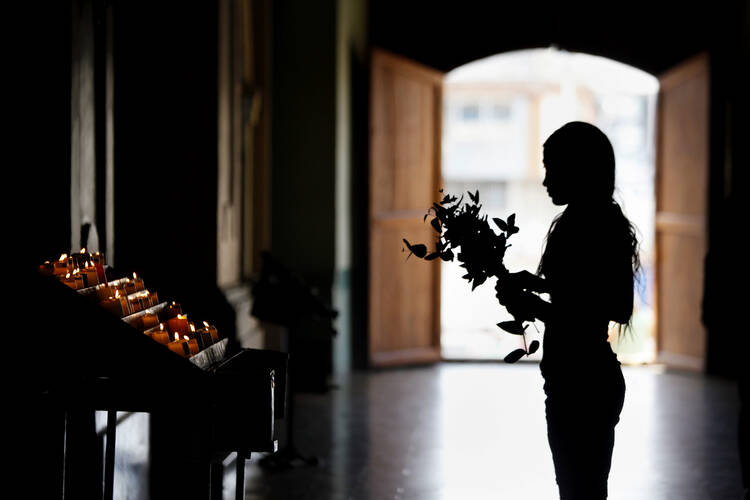 Thanks to Pope Francis, apostolic exhortations are now big events and news stories. In the 263 pages of “Amoris Laetitia” (“The Joy of Love”), Pope Francis offers what we have come to expect from him—a thoughtful, nuanced and substantial text that defies easy interpretation. It is also a text that looks to the margins, something else that is a clear Pope Francis trademark. He is attentive to the pressures and struggles of families living in poverty, but he also highlights another group on the margins: victims of domestic violence.

According to the World Health Organization, “1 in 3 (35 percent) of women worldwide have experienced either physical and/or sexual intimate partner violence or non-partner sexual violence in their lifetime.” And yet, domestic violence is rarely treated as a clear and present threat to the family as the building block of society. It is a “family issue” that is often overlooked or ignored in favor of hot-button issues like divorce, remarriage, same-sex marriage or birth control. In July 2015, Donald Trump’s campaign manager claimed “you can’t rape your spouse” (subsequent apologies do not change the real prevalence of this position). It is significant that Pope Francis highlights domestic violence (verbal, physical and sexual), as well as other forms of violence against women and children in “Amoris Laetitia” and that he does so by taking aim at patriarchal structures that manipulate marriage to justify violence.

In paragraph 54, Francis begins, “I would like to stress the fact that even though significant advances have been made in the recognition of women’s rights and their participation in public life, in some countries much remains to be done to promote these rights. Unacceptable customs still need to be eliminated.”  He names “domestic violence and various forms of enslavement,” “reprehensible genital mutilation of women,” “lack of equal access to dignified work and roles of decision-making” and the exploitation of women’s bodies by both commercial surrogacy and objectification by mass media as concrete examples. All of these are forms of violence against women. Why do they continue to exist? Pope Francis names patriarchy here and in key places throughout the exhortation. “History is burdened by the excesses of patriarchal cultures that considered women inferior,” and Pope Francis is clearly aware that we too are burdened by the persistence of discrimination against women. At a few points in the exhortation, Pope Francis encourages the rejection of “older forms of traditional family marked by authoritarianism and even violence” (No. 53).

Christianity, according to Francis, has no place for views of marriage where women are subjugated. In a particularly honest and critical treatment of St. Paul, he rejects any interpretation of Ephesians that subjugates women or legitimizes sexual submission (No. 156). Recognizing and moving beyond the patriarchal context of St. Paul is an important point reinforced in “Amoris Laetitia.” Subjugation and manipulation lead to violence, which frequently escalates; according to WHO, “Globally, as many as 38 percent of murders of women are committed by an intimate partner.” In a particularly beautiful section on Corinthians highlighting love as neither irritable or resentful, he concludes, “if we must fight evil, so be it; but we must always say ‘no’ to violence in the home” (No. 104).

Questions of domestic violence do not just affect individual families but larger society. Pope Francis’ condemnation of the logic of the market (No. 201) is reminiscent of “Evangelii Gaudium,” in which he argued that inequality spawns violence (Nos. 59-60). This violence he recognizes infects society, but often begins at home (No. 51).  And, applying the unnamed principle of subsidiarity, the wider family, all of us, are morally responsible to intervene to “make up for the shortcomings of parents, detect and report possible situations where children suffer violence and even abuse” (No. 197).  As brothers and sisters, we must accompany and stand with survivors of domestic violence and child abuse. To do this well, we need greater support and pastoral training for priests, lay ministers and community members to recognize and respond to these situations of violence.

Finally, Pope Francis clearly upholds the dignity of survivors, recognizing that “in some cases, respect for one’s own dignity and the good of the children requires not giving in to excessive demands or preventing a grave injustice, violence, or chronic ill-treatment” (No. 241). This separation may not just be “inevitable,” but “morally necessary” (No. 241). Pope Francis is clear not to allow women subjected to violence to be sacrificed to “traditional” and “indissoluble” marriage. The substance on this subject is not new; but the prominence and strength of his statements are important. Embracing the full dignity of women and girls begins in the home and the greatest barriers to that are often forms of subjugation and violence in the home. In “Amoris Laetitia” Pope Francis reminds us that violence against women is a family issue.

Meghan J. Clark is currently a Fulbright Scholar and Visiting Lecturer at Hekima Institute for Peace Studies and International Relations in Nairobi and an assistant professor of moral theology at St. John’s University, Queens, N.Y.

Show Comments (
4
)
Comments are automatically closed two weeks after an article's initial publication. See our comments policy for more.
Lisa Weber
6 years 9 months ago
Rejecting patriarchy is a wonderful thing! Rejecting matriarchy is its logical corollary. When the church goes from a family model to a community model, it will be a far more welcoming place.
Cody Serra
6 years 9 months ago
It is encouraging the comndenation of patriarchy as the cause of much of women of all ages in the form of violence, subjugation and inequality. I wonder why some of the same sad situations that occur in the institutional Catholic church are ignored. The Church is a big and powerful patriarchy itself. Francis has advanced a little this unfair cause, but more in words than action I guess it is one step at the time. First, the recognition of the problem in societies and cultures In the secular world. Hopefully, later it may translate the same to the Church.
Richard Murray
6 years 9 months ago
Dear Friends, After having been silent on religion for some months, Ross Douthat at the zionist New York Times has said more subterfuge and nonsense about Pope Francis’ “Amoris Laetitia.” Here’s a critique of Douthat’s article: https://scripturefinds.wordpress.com/2016/04/10/part-ii-ross-douthat-is-a-literary-fukushima/ And here is a downloadable version: https://www.academia.edu/24247902/Ross_Douthat_Is_a_Literary_Fukushima_Part_II
James Ignatius
6 years 9 months ago
I love that he laid the smackdown on patriarchalism, but it's a little ironic because he is the patriarch of the world's most obstinate patriarchal structure.