Each moment of the triduum offers important insights into our contemporary world. 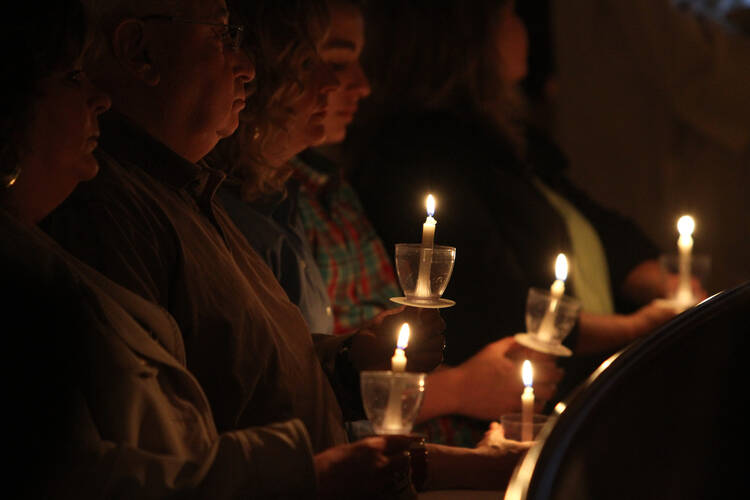 While Christians believe in the Easter story, it is sometimes difficult for us to connect with Easter in a personal way. The events that we hear recounted during the Easter Triduum may sometimes seem far removed from our daily lives. But is it true that the Passion narratives and the story of Christ’s resurrection have no intersections with our present-day world? As St. Paul would say, “By no means!” Each moment of the triduum can offer important insights into our contemporary world and contemporary lives.

Holy Thursday. The story of the Last Supper is an invitation for Catholics to meditate on Jesus’ institution of the Eucharist. But the Gospel of John, which Catholics will hear proclaimed this year on Holy Thursday, focuses on another event: the foot washing. There is some lively debate among New Testament scholars over whether or not the foot washing is better seen as an example of “humble service” (Raymond E. Brown, S.S.) or as the inauguration of a “community of equals” (Sandra M. Schneiders, I.H.M.). But perhaps both are accurate—and both models are crucial for the contemporary disciple. A community of equals demands humble service, both to our brothers and sisters in the church and to the world. And, as Jesus demonstrated when he washed the feet of the disciples, service to our brothers and sisters requires actual contact—that is, it requires physical touch as well. During Pope Francis’ visit to Argentina in August 2013, he reminded us that it is not enough simply to give money to a poor person. “If you did not touch him,” he said, “you did not meet him.”

How can we make our church more a “community of equals?” How can we move from self-aggrandizement toward “humble service” in the Catholic Church? And when are we called to meet and touch the poor among us?

Good Friday. The sufferings of Jesus are unique: the carpenter from Nazareth was the only sinless human being to suffer. But the types of things that Jesus endured during his Passion are endured today by men, women and children across the globe: persecution, torture, imprisonment and execution by the state. Tragically, our own government was complicit in torture, in the dark cells of Abu Ghraib and other government-approved prisons. Jesus was imprisoned, as over 1.5 million men and women in the United States are incarcerated, in proportions that far outstrip other developed nations. And capital punishment, which a Vatican official in a speech before the United Nations recently declared to be against Catholic teaching, finds its most famous victim in Jesus Christ.

More generally, martyrdom and its attending horrors are not a thing of the past. One needs only to look to the Middle East to witness the terrible persecution of Christian communities, many of them ancient, at the hands of the Islamic State. In so many ways, Christ continues to suffer in his body today. How can we aid him?

Holy Saturday. This is the day of dashed expectations. The disciples cowered behind closed doors, terrified of being discovered and put to death. After all, their leader had just been executed in the most shameful manner imaginable. Hope seemed lost. So many situations in this world (like the threats from the Islamic State) seem without hope. On a more local level, our government seems stuck in permanent gridlock. Can our government take any serious steps to aid the poor, repair our crumbling infrastructure and improve our faltering public educational system? Within our church, there is the continuing problem of addressing the legacy of sexual abuse; also, many feel that laypeople are still largely shut out from positions of institutional leadership and authority. It can seem overwhelming even to consider all these challenges. Yet the disciples were called to hope in the midst of confusion and disappointment. Despair, as they discovered, is never the answer.

Easter Sunday. The Passion narratives make no sense without Easter. And it is here that the Scriptures intersect with our lives most powerfully. Yes, we suffer the pain of a broken world, of dashed expectations and seeming hopelessness. But the Resurrection tells us that suffering is never the last word, that God is always a God of surprises and that nothing is impossible with God.

One modest example of new life today is the papacy of Francis. Before his election, many believed that nothing would ever change in the church; even that nothing should change. But from the moment he took office, Pope Francis brought a new style, tone and clarity to the office of the papacy, opening up new ways of conversing and making decisions, speaking to people in new and direct ways and attracting many people who had long ago written off the church as irrelevant to their lives. His actions help direct us toward the Risen One, the source of all new life.

The Editors
Show Comments (
1
)
Comments are automatically closed two weeks after an article's initial publication. See our comments policy for more.
Anne Mullee
7 years 1 month ago
I think Mary was sinless and she suffered a lot too.