A Listening Church: Communications and collegiality in the age of Francis 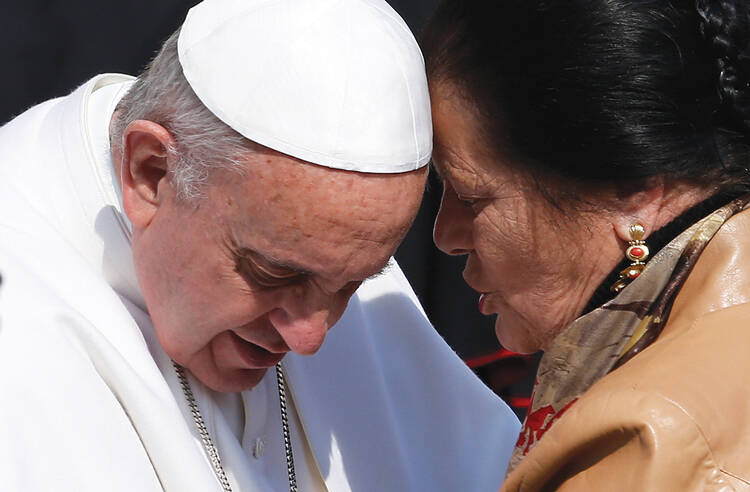 How does the center of institutional authority—in the Catholic Church, the papacy and the Vatican—allow dialogue within a global, decentralized, talk-back culture? The answer is: with great difficulty.

Pope Francis’ open and friendly communication style has stirred interest globally, especially among communication-study specialists. Much attention has been focused on his personal style in communications, but he is also developing and implementing a new style of communications within the church itself. When the pope urged candid discussions at the recent assemblies of the Synod of Bishops on the family, it was interesting to see how this worked and where it proved challenging among church leaders.

There were two types of challenges visible in the synod: negotiating the content divisions—the arguments over the theological material at hand and the decisions to be made—and dealing with the processes set up to facilitate healthy dialogue. While the discussions over content, especially about Communion for the divorced and remarried, received the most global media attention, the way the dialogue itself worked was at least as fascinating. This is not surprising, because process issues are basic to facilitating fruitful dialogue. Much valuable theory and practice already exist to aid the institution in establishing authentic dialogue. But the system resists.

The issue is this: How does a tradition of centralized hierarchy interact with and communicate effectively in a decentralized digital world? This devolution of power is a current challenge for many centralized organizations and power structures globally, as Moisés Naím has explained expertly in The End of Power: From Boardrooms to Battlefields and Churches to States.

When he spoke to the bishops on his trip to the United States, Pope Francis spoke of a “culture of encounter” in which “dialogue is our method.” He recognizes that whatever challenges may be encountered in official, centralized communications, there is a deeper and more basic level at which communication—in the sense of dialogue and encounter—is at the heart of the church’s mission to carry the message of the Gospel to the world.

While the recent synod meetings provided plenty of evidence of difficulties with and even occasional resistance to this commitment to dialogue and encounter, Pope Francis was not deterred. He showed patience at synod sessions. This patience is motivated, it seems, by a long view of how the process of dialogue within the church needs to develop.

The pope has said that the church should not be run like a top-down organization, with all authority and power radiating from the center; he said it should be an “inverted pyramid” in which the bishops and pope exercise their authority and deepen their identification with Jesus “in serving the people of God.” In his address marking the 50th anniversary of the Synod of Bishops, the pope made clear the church should not just hold synods; it should become synodal. He said that the Second Vatican Council’s hope for “the spirit of episcopal collegiality has not yet been fully realized,” and he urged a “healthy decentralization” away from Rome.

Indeed, these challenges are not new. Over 30 years ago, while attending a conference on communication and theology, I had a lovely lunch in a quaint Italian village with three respected theologians, one each from France, Germany and the United States. Fueled by a glass of Italian wine, I asked them, “What is the key challenge facing the Catholic Church today?” They answered virtually in unison: “truly listening to the local church.”

The three decades since have seen a significant development of resources in communication and theology that can help to facilitate a synodal church. Here are a few examples:

• Eight international meetings have been held linking communication studies to moral theology, ecclesiology and other areas of theology.

• For a decade, an annual seminar was held at the convention of the Catholic Theological Society of America so theologians and communication specialists could interact and think together.

• European Catholic funding supported a small international ecumenical commission to meet annually for a decade on various continents to think together with local leaders about media, religion and culture.

• For three years the U.S. bishops’ conference and the Vatican have sponsored seminars at Santa Clara University allowing theology and communication experts to push these ideas further.

• A document called “A Communication and Theology Resource Kit”has been produced, collecting key writings to date.

As valuable as all these resources are, however, the larger challenge is to implement these ideas at the parish and diocesan level so that the life of the church can be enriched by more dialogue, drawing in the gifts of the people of God beyond the hierarchy, of women and other laypeople. This has already been demonstrated in Europe where Matthias Scharer and Bernd Jochen Hilberath have developed a project, documented in The Practice of Communicative Theology, involving workshops that attracted hundreds of church members.

According to one participant, through “experimenting with, and reflecting on, group processes that promote personal and collective discernment and decision-making in the church...they have developed a theologically integrated approach to group communicative practices.” Similar workshops could easily be organized regionally in the United States. Another example is the practice of local diocesan synods, such as the one conducted in 2014 in the Diocese of Bridgeport, Conn., discussed at length by Bishop Frank Caggiano in an interview published on America’s website (“Church Reform From Below,” 7/27/14).

One insight emerging from all this work is that churches, for centuries, have used various communication channels as instruments of conversion. Now, however, communication and computer technologies have merged into global dialogic networks. Individuals, groups and cultures have become mediated—totally suffused by a global media ecosystem. Churches have found their one-way messages are not being heard or valued either internally or externally, especially by young people. Desperate individuals and leaders have not been listening appreciatively to each other; gridlock has spread. William Isaacs, who wrote Dialogue and the Art of Thinking Together, says that in most dialogues, “we don’t listen; we just reload.”

Pope Francis has spoken out against “a hermeneutic of suspicion” or “hostile rigidity.” In his encyclical “Laudato Si’” he used the word dialogue 25 times.

Communication theory and practice are keys to the church’s future success. Digital communication technologies are an essential part of the infrastructure of connection, but they can be used effectively only if the church learns how to integrate dialogue and listening at the heart of its structures of authority. This is especially important as talk proceeds about decentralization. It is also critical if “the people of God,” predominantly at the level of local churches, are to be deeply involved in this renewal.

The pope reminded the bishops at the synod: “I cannot ever tire of encouraging you to dialogue fearlessly.” The whole church needs to hear that encouragement as well.

Frances Forde Plude, a member of the Catholic Theological Society of America, has worked to integrate communication studies into theology.

Show Comments (
9
)
Comments are automatically closed two weeks after an article's initial publication. See our comments policy for more.
Charles Erlinger
6 years 6 months ago
In regard to this paragraph, "Communication theory and practice are keys to the church’s future success. Digital communication technologies are an essential part of the infrastructure of connection, but they can be used effectively only if the church learns how to integrate dialogue and listening at the heart of its structures of authority. This is especially important as talk proceeds about decentralization." A concrete example of where and how this has worked would be appreciated.
Lisa Weber
6 years 5 months ago
Thank you for this thoughtful article! 4/3 Another thought - when Pope Francis sent the questions to be considered for the synod, he made them public at the same time that he sent them to the bishops. That showed that he truly wanted to include the laity. If the day comes when Pope Francis is able to create a dialogue that includes women directly, laywomen in particular, he will have accomplished something revolutionary.
Richard Booth
6 years 6 months ago
Interesting topic. However, I am much more concerned with a church that listens to its individual and family laity in personal settings than in bishops talking to each other. Rushing in and out of mortuaries quickly to "console" families of deceased loved ones, failing to take the time to truly be spiritual directors, and behaving impatiently as a hospitalized person wants to talk, rather than rushing in with a blessing only to rush out again, do not reflect my idea of respect or of listening. Perhaps the priesthood attracts individuals who would act indifferently without regard to what vocation they enjoyed, or perhaps there is a culture of lassitude in seminaries or rectories, or a severe lack of social skills that underly these issues. I don't exactly know. On the other hand, I imagine there are priests who do listen; I just don't happen to know any. Am I anti-clerical? No, but I do accuse myself of being anti-clerical-attitude-and-behavior, without overgeneralizing.
Lisa Weber
6 years 5 months ago
There are priests who listen. You just have to look further.
Richard C Cowart
6 years 5 months ago
It should not be something you have seek out from a institution that guarantees it
Richard C Cowart
6 years 5 months ago
For the divorced its difficult to expect empathy from a institution governed by men who have never been married and pledged abstinence and especially one that has been mired in child abused. Forgiveness is a two way street, you can't ask for something that you are not willing to give.
Richard C Cowart
6 years 5 months ago
So yes Richard I agree its not something you should have to search for
William Rydberg
6 years 5 months ago
In my opinion chopping up process through implementation of Large numbers of Synods with their own processes will result in processes as convoluted as the tax code... The Church is on the Mission of saving souls, it's not a debating society for policy wonks in my opinion...
Richard C Cowart
6 years 5 months ago
The church calls for absolution of its sins - especially those of its priest that sexually abused children. Christ loved and healed everyone one he touched, the woman at the well as well as prevented the stoning of another, then put in charge of his church a man that denied him three times! Parts of the United States remained untouched by the church, the divorce are segregated, the word remains unheard - how can the church expect to heal the very society in which it fails to reach and reject others? Fold your hands at mass and reject the eucharist for weeks on end - "unless you eat of my body and drink my blood you will not have eternal life"... 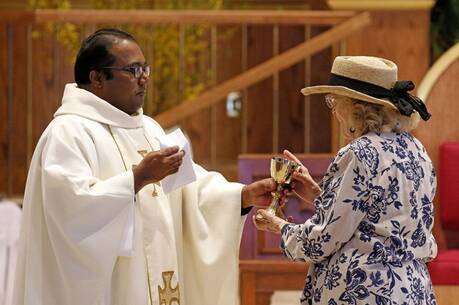 Why don’t Catholics receive the precious blood from separate cups at Communion?
The precious blood is an important part of Communion, but many people are afraid of the risk of cross-contamination from a shared chalice. Why shouldn’t we simply use separate cups? There are a few reasons.
Patrick CullinanSeptember 28, 2022 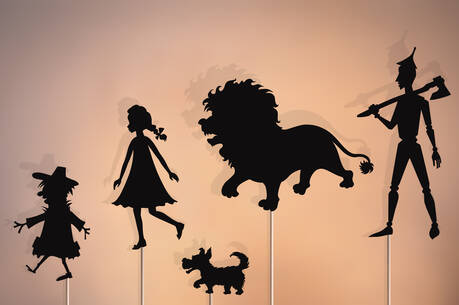 Like Dorothy in Oz, we can always return home
The way to believe in the vision is to immerse ourselves ever more deeply in the life of the vision keeper, the mystery that we call the church.
Terrance KleinSeptember 28, 2022 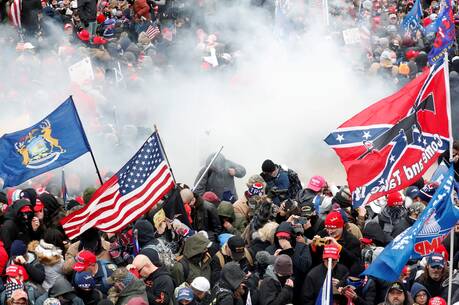 ‘We are increasingly alarmed by the signs of the times’: Catholic leaders urge lawmakers to protect voting rights
“Catholics must not be silent in the face of growing threats to voters, fair elections and democratic principles,” according to Faith in Public Life.
Michael J. O’LoughlinSeptember 28, 2022 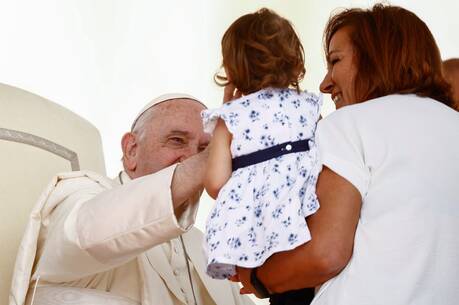