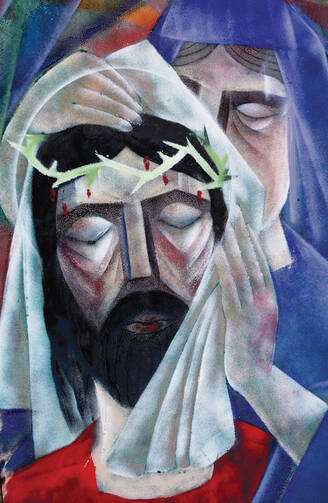 Despite various attempts over the centuries to give her a personal story, there is no evidence that she was a historical figure. She has never been included in any official list of Catholic saints; and although she is commemorated on July 12 in the Orthodox churches, there has never been a universally observed feast day for her in the Western church.

And yet there she is: Veronica. The story of Veronica is depicted on the walls of countless churches throughout the world, and it is a fixture in the prayer of Christians, particularly during Lent.

Praying the Stations of the Cross has always been, for me, as much a discipline as an act of devotion. Like the rosary, I recognize that “making the stations” is a way to reflect on the life of Jesus in a particularly physical way. Over the years I have become increasingly drawn to the sixth station: Veronica wipes the face of Jesus. There is an intimacy and compassion in that act that seems to push a sort of pause button in the litany of pain that is the Passion.

Each of the synoptic Gospels recounts the story of the woman, afflicted for many years by a “flow of blood,” who was cured by touching Jesus’ cloak (see Mt 9:18–26; Mk 5:25–34 and Lk 8:43–48). A fourth-century text, the “Acts of Pilate,” calls this woman Bernice and tells how she went to Rome, curing the emperor Tiberius through an image of Christ that she had painted out of gratitude for her healing; when she died, the cloth was entrusted to the care of Pope St. Clement I. Around the same time, St. Eusebius of Caesarea recounted in his Ecclesiastical History (vii.8) another tale of gratitude:

The woman with a hemorrhage, who as we learn from the holy gospels was cured of her trouble by our Savior, was stated to have come from [Caesarea Philippi]. Her house was pointed out in the city, and a wonderful memorial of the benefit the Savior conferred upon her was still there. On a tall stone base at the gates of her house stood a bronze statue of a woman, resting on one knee and resembling a suppliant with arms outstretched. Facing this was another of the same material, an upright figure of a man with a double cloak neatly draped over his shoulders and his hand stretching out to the woman.... This statue, which was said to resemble the features of Jesus, was still there in my own time, so that I saw it with my own eyes when I resided in the city.

In the Western tradition, Bernice, the woman cured of the flow of blood and whose name has long been associated with an image of Christ, has come to be known as Veronica, the woman of the sixth station of the Way of the Cross who took pity on Jesus, wiping the blood and sweat from his face as he made his way to Calvary. This legend was likely a medieval creation intended to explain and support the provenance of images of Jesus kept in various churches throughout Europe. The most important of these is the relic, kept in St. Peter’s Basilica, which has come to be known as Veronica’s Veil. Many scholars have proposed that the name Veronica is a composite of two words: vera (Latin for “true”) and eikon (Greek for “image”). Although the name is thought to be a play on the title given to the “true image” of Christ depicted on various pieces of cloth, I think it is a beautifully fitting title for this woman, who is herself a true image of Christian discipleship.

Luke tells us that many women accompanied Jesus during his ministry and as he carried his cross. It does not seem unreasonable that one of these courageous women, perhaps even the woman cured of the flow of blood, would have stepped forward to show Jesus some kindness as he walked to his execution. Perhaps on that Friday, the day Jesus died, one of his followers put his teachings into practice and reached out in compassion to show a dying man that there were still those who cared for him.

I find myself challenged and comforted by the idea of Veronica being the woman cured of the flow of blood. Grateful for the gift of a renewed life, she expressed her gratitude and love in an act of courage, compassion and faith. Pushing her way through the crowd, prompted by love, she recognized beneath the blood and gore the presence of the Christ she loved and in whom she had believed. On Good Friday, as we recall the great gift that God has given us, Veronica’s act is a powerful reminder that we are called to be people of compassion. A meditation for the sixth station, composed by Cardinal Angelo Comastri, archpriest of St. Peter’s Basilica, stirs the faithful to follow Veronica to the margins:

A woman steps out of the crowd,
keeping alight the lamp of our humanity,
...and wipes his Face
and finds his Face!
How many people today have no face!
How many people are relegated
to the margins of life,
exiled, forsaken,
by an apathy that kills the apathetic.
Only those afire with love are truly alive,
those who bend low before Christ who suffers
and awaits us in those who are suffering: today!
Today! For tomorrow will be too late!

For those of us who profess to be followers of Jesus, Veronica’s Good Friday faith is a challenge to look at the world around us, and those in it, with the eyes of faith. Veronica’s act of compassion becomes an example of Christian charity that is an amazing anticipation of the self-offering of Jesus, represented only a handful of steps later. As I continue my own journey of faith, I am grateful for the gift of her witness, whatever the origins of Veronica’s story might be. For now, for this Lent, that is enough.

Silas Henderson, managing editor of Abbey Press Publications and Deacon Digest Magazine, is the author of numerous reflections on prayer and spirituality. He blogs at www.fromseason2season.blogspot.com.