The German bishops reflect on justice, mercy and love at the Synod on the Family 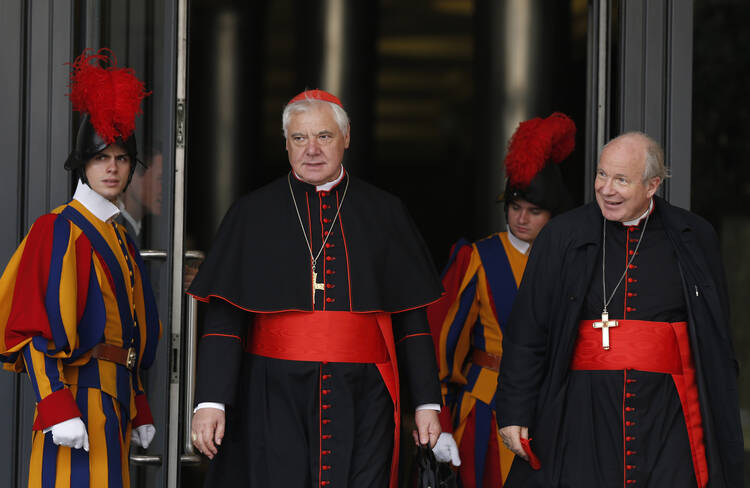 At a press briefing on October 14 releasing the second round of working papers from various language groups at the Synod on the Family, Cardinal Vincent Nichols said he believed the German language report, in particular, was “very important” because it focused on was “the relation between mercy, truth, grace and justice.” He also drew attention to the fact that this group unanimously agreed on all its proposals.

America here provides a working English translation of that document. You can read a report on the other language reports here.

We discussed at length the concepts of compassion and truth, mercy and justice—which are frequently considered to be opposites—and how they are related to each other theologically. In God they are not mutually opposed opposites. Because God is love, justice and compassion come together in God. God’s compassion is the fundamental revealed truth, which is not opposed to other revealed truths. Rather, it reveals to us their most profound basis, because it tells us why God expressed himself in his Son and why Jesus Christ through his word and sacraments is permanently present in the church for our healing. God’s compassion thereby reveals to us the basis and goal of the entire work of salvation. God’s justice is his compassion, by which God justifies us.

We also pondered the consequences this intertwining may have for our accompaniment of marriages and families. It excludes a one-sided deductive hermeneutic, which subsumes concrete situations under a general principle. In the spirit of Thomas Aquinas and of the Council of Trent as well, it is necessary to apply fundamental principles with prudence and wisdom to the particular, often complex situation. We are not talking here about exceptions, in which the word of God would not be valid, but rather about how to justly and equitably apply the words of Jesus—for instance his statement about the irrevocability of marriage—with prudence and wisdom. Thomas Aquinas made clear that this application to the concrete situation is necessary when he says: “Prudence does not consist only in rational reflection, but also considers the application to action, which is the goal of practical reason” (STh. II-II-47, 3: “ad prudentiam pertinet non solum consideratio rationis, sed etiam applicatio ad opus, quae est finis practicae rationis”).

Another aspect we discussed related to the gradual guidance of people toward the sacrament of marriage, as discussed several times in Chapter 3 of Part 2: from noncommittal relations, to unmarried couples living together, to couples who are only civilly married, to an ecclesiastically valid and sacramental marriage. Accompanying these individuals pastorally in the various stages is a great pastoral challenge but also a joy.

It became clear to us also that in many of our discussions and observations we are thinking too statically and not biographically and historically enough. Church teaching on marriage has developed and deepened with history. Initially the issue was the humanizing of marriage, which took solid form in the belief in monogamy. In the light of Christian faith, there came a deeper appreciation of the spouses’ personal dignity, as well as awareness that the character of human beings as made in the image of God appears in the relationship of man and woman. Another step emphasized the link between church and marriage, resulting in its perception as the domestic church. Finally, the church became expressly conscious of the sacramentality of marriage.

This historical path of deepening understanding can also be observed today in the biographies of many individuals. Initially they are touched by marriage’s human dimension; within the church they become convinced of the Christian view of marriage; and from there they find their way to the celebration of a sacramental marriage. Just as the historical development of the church’s teaching required a certain amount of time, pastoral care must allow individuals time to mature on their path toward sacramental marriage and not act on the principle of “all or nothing.” Here the idea of a stepwise process ("Familiaris Consortio," No. 9) must be further developed for the present. John Paul II already laid the groundwork for this: “The church’s pastoral concern will not be limited only to the Christian families closest at hand; it will extend its horizons in harmony with the heart of Christ, and will show itself to be even more lively for families in general and for those families in particular which are in difficult or irregular situations.” (F.C., No. 65)

Here the church unavoidably occupies an area of conflict between necessary clarity about the doctrine of marriage and family on the one hand and its concrete pastoral mission on the other hand to accompany and convince also those individuals who in their lifestyles only partially agree with the principles of the church. It is necessary to walk with them on the way to a fulfilled life in marriage and family, as the “gospel of the family” promises.

For this a personally oriented pastoral process is necessary that draws equally upon the normative character of doctrine and the personal character of human beings, keeping in mind conscience and strengthening a sense of responsibility. “For man has in his heart a law written by God; to obey it is the very dignity of man; according to it he will be judged. Conscience is the most secret core and sanctuary of a man. There he is alone with God, whose voice echoes in his depths” ("Gaudium et Spes," No. 16).

We would like two more aspects to be considered for the text’s final version:

The impression must be avoided that holy Scripture is being used merely as a source of citations for dogmatic, legal or ethical positions. The law of the new covenant is the work of the Holy Spirit in the hearts of believers (see Catechism of the Catholic Church, No. 1965-66). The written word must be integrated into the living word, which resides in the hearts of human beings through the Holy Spirit. This gives holy Scripture far-reaching spiritual force.

In conclusion, we had difficulty with the concept of natural marriage. In the course of human history, natural marriage is always affected by culture. The idea of natural marriage may imply that there is such a thing as a natural way of life without cultural imprinting. We therefore suggest the formula: “marriage based on creation.”

Synod on the Family
Show Comments ()
Comments are automatically closed two weeks after an article's initial publication. See our comments policy for more.