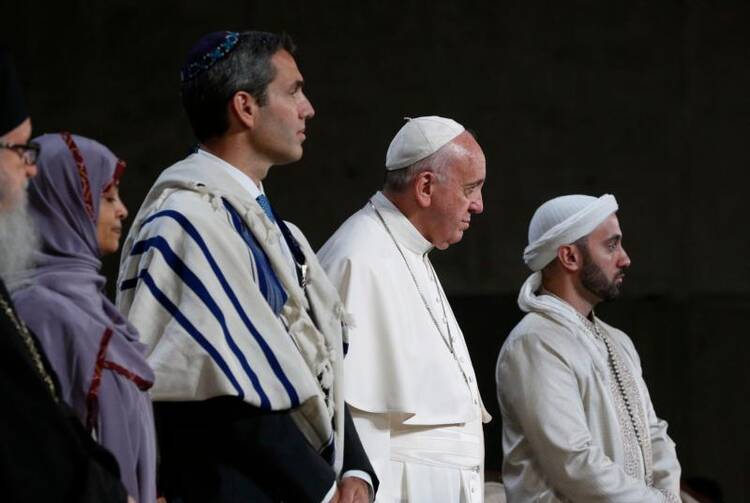 At the height of the Cold War, on Oct. 27, 1986, Pope John Paul II invited the leaders of the world’s main religions to Assisi for “a day of prayer and fasting for peace.” Thirty years later, there is an even greater need to pray for peace because, as Pope Francis says, “a third world war is being fought piecemeal,” and blind violence and hatred are spreading across the globe.

It is therefore significant that leaders of the different religions have agreed to come together again in Assisi on Sept. 20 to pray for peace and to renew their commitment to work together for peace. They do so as bitter conflicts are being fought not only in countries that hit the headlines, like Syria and Libya, but also in others that get little media attention, like Yemen and Sudan; these conflicts are causing a refugee crisis of a dimension not seen since World War II, involving some 60 million people.

Convened under the banner “Thirst for Peace: Religions and Cultures in Dialogue,” this three-day event (Sept. 18 to 20) is organized by the Sant’Egidio Community, together with the Franciscan Families and the Diocese of Assisi. It brings together leading representatives from Judaism, Christianity, Islam, Buddhism, Hinduism, Sikhism and traditional religions. They will participate in roundtable discussions regarding peace on the first two days, and on the third they will pray for it.

Pope Francis will come for that final day and join Ecumenical Patriarch Bartholomew; the archbishop of Canterbury, Justin Welby; the Syro-Orthodox patriarch of Antioch, Efrem II; the Israeli chief rabbi of Tel Aviv, Meir Lau; and the head of Japan’s Tendai Buddhism. There will also be a strong Muslim representation from 17 Islamic states, including Ahmad Muhammad Al-Tayyeb, the Grand Iman of Al-Azhar, the most authoritative Sunni Muslim center in the world.

On that day, Christians will pray at the tomb of St. Francis, while members of other religions will pray at other sites across the town. In the afternoon, they will come together in a powerful witness to the world of their joint commitment to peace.

As in Assisi in 1986, this event will highlight the vital contributions all religions are called upon to make for the promotion, building and safeguarding of peace. Cardinal Francis Arinze of Nigeria, former president of the Pontifical Council for Interreligious Dialogue, highlighted this call in his book Religions for Peace (Doubleday), published soon after the attack on the twin towers of the World Trade Center, by drawing attention to the fact that all religions “with admirable unanimity, teach the Golden Rule: Love your neighbor as yourself.” “This,” he underlined, “is a key foundation for peace.”

Introducing that book, the French cardinal Paul Poupard affirmed that “each of us is either a peace maker or a peace breaker.” But, he added, “fanatics and fundamentalists have no doubt given religion a bad name. Politicians, having their own hidden agendas, at times exploit religion to fan the flames of intolerance and hatred. Such unwholesome propaganda can only boomerang, causing a spiraling effect of violence.”

His words have found strong verification since then not only in Afghanistan, Iraq, Syria, Libya, Yemen, Nigeria, Ethiopia and South Sudan but also in European countries and even the United States, where Islamophobia is being stoked and exploited by politicians in an anti-immigrant key.

The origin of much of the violence, though not all of it, in recent years can be traced back to March 19, 2003, when, rejecting appeals from people across the globe, including John Paul II, President George W. Bush, supported by Prime Minister Tony Blair of Britain, launched the war on Iraq. Immediately after handing over the pope’s appeal to the president on March 5, 2003, Cardinal Pio Laghi, speaking to the press in the name of the Holy See, warned that such a war would bring “grave consequences,” including “the suffering of the people of Iraq and those involved in the military operation, a further instability in the region and a new gulf between Islam and Christianity.” Prophetic words! The world is still reaping the bitter fruits of that war.

Pope Francis is well aware of all this, and by coming to Assisi he is affirming yet again the urgent need for all religions to work together for peace through dialogue and to reject the use of God’s name to justify violence.