Why mass incarceration became the norm, and how we can fix it 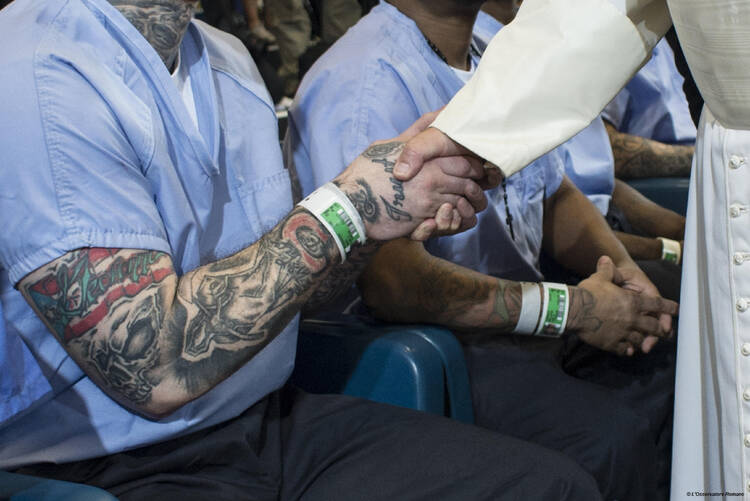 On Sept. 27, while visiting inmates at the Curran-Fromhold Correctional Facility in Philadelphia, Pope Francis addressed the topic of mass incarceration in the United States, one of the most devastating crises in our nation’s history. He said, “Any society, any family, which cannot share or take seriously the pain of its children, and views that pain as something normal, or to be expected, is a society condemned to remain a hostage to itself.” In the United States there are over two million inmates in prisons and jails. As a nation, we must reflect on how and why this crisis became the norm.

Since 1980, the number of inmates in U.S. prisons and jails has grown from roughly 500,000 to over two million. Today the United States jails a higher number of its citizens than the top 35 countries in Europe combined. This has shattering effects on people of color, particularly African-Americans. Today, there are nearly a million African-Americans in our prisons and jails. One in every 35 black men is currently serving time. (A recent report has also found that while juvenile arrest rates have declined, African-American girls have become the fastest growing segment of the juvenile justice population.) For Latinos, the rate is one in 88. While making up only 30 percent of the U.S. population, African-Americans and Latinos account for 60 percent of the prison population.

In July, President Obama, in an attempt to further examine the prison system, visited El Reno Correctional Institution in El Reno, Okla., where he met with six inmates, including 24-year-old Jesús Chávez. Mr. Chávez, who was imprisoned at age 20 for dealing in ecstasy pills, describes losing everything at the time of his arrest, including his family. His mother and brother add that it has been painful dealing with Jesús’ absence. Sadly, Mr. Chávez’s case is not an exception.

A recent bipartisan deal reached by Senate leaders shows promise. The legislation would give prisoners with good behavior an opportunity for reduced sentences, in turn lowering the time served by low-level drug offenders. The Coalition for Public Safety is another bipartisan initiative that seeks to make the criminal justice system fairer by creating policies to provide repeat offenders and low-income communities with better resources, like increased funds for rehabilitation programs.

A true reform of our prison system, however, also demands that we question the way we treat violent offenders, who make up a majority of the prison population. All too often, violent offenders are locked away in maximum-security prisons, with little to no human interaction, or worse, sentenced to death. Pope Francis reminds us that while the onus must be placed upon inmates, a just society must also take part in their rehabilitation. He emphasizes that true recovery “benefits and elevates the morale of the entire community.”

How can we begin to deal with this crisis? It is encouraging that both Democrats and Republicans recognize the problem. But some of the proposed measures do not go far enough. We need to reflect more deeply on the purpose of our correctional institutions. The Heidering Prison in Berlin focuses on the redemption of prisoners rather than on their punishment. Wardens there are often psychologists, who provide therapy to inmates. Prisoners are allowed to wear their own clothes, cook their own meals and visit with family. They are given a sense of independence and self. The emphasis, according to Gero Meinin, director of the Berlin Ministry of Justice, is on helping prepare them for re-entry into their communities.

We can also better allocate government funds. Right now the United States spends over $80 billion annually to keep people incarcerated. Surely some of these funds can be allocated into programs that would help reintegrate released prisoners into society. Currently, the welfare reform law of 1996 prevents anyone convicted of a felony or state drug-related crime from receiving federally funded food stamps. Yet studies show that providing released inmates with resources, like food and shelter, lowers recidivism rates. Funds can also be allotted to companies that hire former prisoners. Research shows that only 40 percent of employers surveyed would consider hiring job applicants with criminal histories.

Finally, as Christians, we cannot forget the imprisoned, as if they were no longer part of our society. Pope Francis reminds us that we must see ourselves through the eyes of those behind bars and must see others through Christ’s eyes, adding that we must “create new opportunities: for inmates, for their families, for correctional authorities, and for society as a whole.”

Correction, Oct. 9, 2015: A previous version of this article stated that Pope Francis visited inmates at the Curran-Fromhold Correctional Facility in Philadelphia on Sept. 26. The pope visited the prison on Sept. 27.

The Editors
Show Comments (
5
)
Comments are automatically closed two weeks after an article's initial publication. See our comments policy for more.
Tom Fields
6 years 1 month ago
In 48 States out of 50, African-Americans have the highest school drop-out rate. 90% of African-American murders are by other African-Americans. 72% are born out-of-wedlock. Men are impregnating multiple women---destroying "family". The women draw welfare and the "fathers" have multiple places to "crash" In Chicago---90 plus percent of African-American teen aged males are unemployed. Crime and prison have become a chosen way of life .The schools are disasters---despite record amounts of money. City governments are corrupt---money sources for plunderers. We need trade schools, the teaching of morality and a focus on morality---teaching on the value of family----reform of welfare and city governments.
David Knoble
6 years 1 month ago
If you look at curves of prison/jail population since 1920, it is, essentially, a standard growth curve (exponential). It appears to have peaked (temporarily?) around 2009, with data going to 2011. Doubling time, since about 1975 appears to be about 10 years. If it is a standard growth curve, something is driving it. I doubt that the drivers are simple or few. I suspect that, with the little we know, the best way to help our prisoners is to aid them with honest work when they are released. This begins with learning skills before release. In this way, we could make a small difference.
Tom Fields
6 years 1 month ago
1.Look at incarceration rates among African-Americans, illegal aliens and Hispanics. 2.Learning skills should begin with basic math, reading and computers in grade school and job-skills in High School---funded by Industry. Prison is too late. Prisoners lack the basics, become functional in Prison Culture---and----obviously---have a criminal record.
Dawn Tedrow
6 years 1 month ago
Although I agree that the family structure of many in our country seems to struggle with providing children a home in which they can feel safe and thrive, I think that the article makes many solvent points about helping non-violent offenders come back into the world and succeed. First and foremost, prisons seem to strip people of their humanity and dignity. All life is sacred, even lives who have become shattered because of ignorant, heinous behavior that results in imprisonment. Although imprisoned, some for life, it would not be a bad thing to offer prisoners opportunities for redemption-and maybe make their lives feel as if they are serving God's purpose for them even though they totally shattered their lives by making ill-informed decisions which have irreparably altered their existence. They are part of humanity, and but for the grace of God, it may have been us or one of our loved ones who ended up in prison. I'm not trying to diminish the severity of the crime, but rather deal with the aftermath, Throwing people into a dungeon is not the answer; our recidivism rates attest to that. There has to be a better way.
Tom Fields
6 years 1 month ago
The Catholic Church could start a revolution in our devastated inner city communities. 1. Create basic skills courses in church spaces---taught at night--using volunteers. Wash DC has huge numbers of educated residents--who could teach. 2. Get industry to provide computers---as was done by a Republican Mayor in Oakland---some years ago. And, provide real training/apprentice/job opportunities from INDUSTRY. 3. Get other Churches to help. 4. Keep the teachers' unions and failed Democrat-controlled inner city cleptocracies out.