Ignatius' Way: A new path for pilgrims, trekkers and cyclists 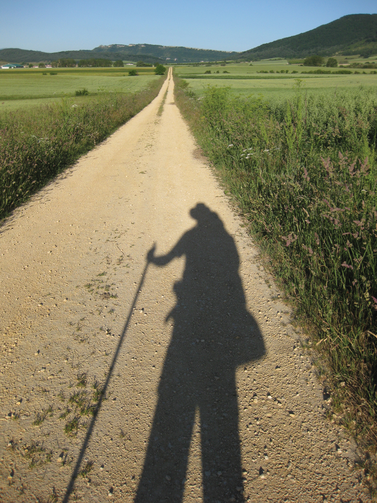 The monastery of Montserrat, tucked into jagged, mile-high rock formations, is an hour’s drive from downtown Barcelona but was a world away to 30 pilgrims who huddled there one recent Saturday morning.

Some had passed the entire night in prayerful vigil beside “La Moreneta,” the Black Madonna of Montserrat, the same icon before which Ignatius of Loyola had passed an all-night vigil, 490 years before, after surrendering his sword as an offering symbolizing his turn to a new way of life.

Others had kept vigil from 10 p.m. to 1 a.m., then retreated to a hostel for a few hours’ sleep before the full group reconvened for our Saturday venture: a 14-mile hike from Montserrat to Manresa, recreating the same trek Ignatius himself made after his vigil. Having eaten a light breakfast, we groggy pilgrims looked out over a cloud-covered valley. The overcast enshrouded suburban roadways and other traces of modernity and created a vista not unlike what Ignatius himself might have scanned.

We started downhill just as the first tourist busses from Barcelona began belching their way into Montserrat’s parking lots. Our motley crew included a few Jesuits, homemakers, teachers, medical doctors, lawyers and a former judge. Most were Catalans from the region surrounding Barcelona; a handful were Basques, like Ignatius himself; the Americas were represented by a doctor from Uruguay and myself, a former investment banker from the United States. Like all prudent trekkers, we carried water bottles, trail mix and sun screen. But we also carried something that distinguished this trek: a bottle of orange paint. Every once in a while one of us would ceremoniously paint a bright orange arrow on the pavement or a utility pole. We were sending signals to future generations: “Keep going, fellow pilgrim. You’re on the right path! Follow these arrows and you will soon reach Manresa.”

For we were not only commemorating Ignatius’ journey of 500 years before; we were inaugurating a practice we hope will continue five centuries hence: the Camino Ignaciano—the Ignatian Way, a new walking and cycling trail from Loyola to Montserrat and Manresa.

The historical backdrop to the new pilgrim trail will be well known to Jesuits and their friends. Ignatius the soldier-courtier suffered a battle injury in Pamplona in 1521 and underwent a profound conversion while recuperating at home in Loyola. He resolved to travel to the Holy Land as a pilgrim and set off in early 1522. As his first objective he journeyed some 400 miles to Montserrat, where he conducted his all-night vigil. He then detoured to the nearby town of Manresa and spent the better part of a year there, eventually enjoying profound mystical illuminations and conceiving the rudiments of his Spiritual Exercises. Published in hundreds of editions in dozens of languages, the Exercisesremain the wellspring of Jesuit spirituality.

Ignatius’ pilgrimage, then, was a walk that changed history, his own and that of the church and of humanity. Although the story of his pilgrimage may be well-known, the route he trekked has languished in obscurity. “Ignatian pilgrimages” sometimes visit highlights along the route by bus. But virtually no one attempts to trace Ignatius’ complete route.

Why should anyone bother? After all, though the route passes historical and natural wonders like the Basque country’s verdant mountains and Zaragoza’s striking blend of Roman, Islamic and medieval Christian culture, it also demands wearying climbs to the mountain sanctuaries of Zumarraga and Arantzazu, not to mention a passage through Los Monegros, Europe’s most desert-like landscape. Is the journey worth the effort?

The best person to answer that question is someone who actually did it, like Terry Howard, an Irish Jesuit who works in Ulster, who summed up his trek this way: “No amount of information, data or reading can substitute for the sheer experience of following in Ignatius’ footsteps, alone and on foot. It fulfilled a lifelong desire.” Not that it was all pleasant. Terry covered the route in about a month during two separate treks, got lost more than once, was once mistaken for a vagrant and lost 15 kilograms along the way. But the weight lost was well worth what he found: “I developed a better sense of Ignatius. I actually felt I was walking with Ignatius, seeing the sights and views he saw along the same route he took, able to explain to him how things looked today, as if I were his eyes on a memory from his past, knowing he’d connect directly.”

With the 500th anniversary of Ignatius’ famous walk exactly one decade away, a small core team committed themselves to developing the Camino Ignaciano as a vibrant pilgrimage route. Over a period of months, three Spanish Jesuits and I independently cycled, walked, drove and Google-mapped Ignatius’ likely route. We were excited to discover that we could stitch together most of an Ignatian Camino using already-existing walking trails from branches of the venerable Camino Santiago.

With the endorsement of the superiors of the Jesuit provinces of Spain, the team has logged significant progress. José Luis Iriberri, a Catalan Jesuit, led the overall effort with dedication and creative flair. Over a period of months, the team mapped the full route and divided it into 27 daily walking segments, catalogued hostels and services along the way and uploaded the information in five languages to a Web site. A guidebook will be published in 2013.

The Camino Web site includes daily reflections based on the Spiritual Exercises, so pilgrims can draw on this resource as they journey. As Father Iriberri put it: “On the one hand, we’re creatively reaching out to increasingly secularized developed world people who are ‘seeking’ something but need a fresh, new invitation to spirituality. And, at the same time, the camino is completely faithful to our Jesuit tradition and will appeal to devoutly practicing Catholics.”

Juan José Etxeberria, S.J., superior of the Loyola Province, spoke of the new camino as an attempt to offer a “transformational experience to modern men and women” by sharing with them “the very best that the Society of Jesus has to offer: Ignatian spirituality.”

Early signs are promising. During events that led up to Spain’s 2011 World Youth Day, Michael Pastor, S.J., accompanied an international group on a trial-run pilgrimage from Loyola to Navarrete, roughly the first quarter of the Ignatian Camino. “Language differences divided the group,” said Pastor, “but they bonded through the sheer physical effort and through Ignatian spirituality. When we reached the end of our short pilgrimage, they wished they could have gone farther together.”

Jaime Badiola, S.J., a member of the core team, anticipates many such opportunities with high school or university students: “The camino can be a fantastic opportunity for student groups: they will grow in solidarity while traveling with each other, confront their own resistance or weakness, be exposed in a fresh way to the life and spirituality of founder Ignatius, and, not least, have fun along the way!” He imagines that the global Jesuit family might take advantage of this new resource.

Still, the team members are also quick to stress that the Ignatian Camino, as Father Etxeberria put it, is a “camino de todos and para todos”—”everyone’s camino.” The devoutly spiritual are welcome, but so are long-distance hikers looking for physical challenge or automobile tourists who want a fascinating, weeklong cultural vacation, visiting places they heard about in their Jesuit school or parish and following a route that encapsulates much of Spain’s remarkable history, from pre-Roman through Islamic and modern times.

The project team, of which I am a member, hopes that by 2022, the anniversary of Ignatius’ pilgrimage, the Camino Ignaciano will be a widespread, vibrant tradition. But we are not distracted by these prospects or by the enthusiastic early response. With the route still in its infancy, much work remains. The world outside Spain has not yet heard of the camino, so marketing is a priority. And even as we have welcomed the initial burst of requests for information, the members, all volunteers, wonder how to find the time and money for follow-up.

Some tasks will only be accomplished one step at a time: Father Iriberri has painstakingly plotted GPS coordinates during a recent trek, creating an easy-to-follow electronic trail for pilgrims with smartphones. Other volunteers are marking the camino the old-fashioned way, with a paint brush in one hand and orange paint in the other, completing a trail of arrows along this 400-mile walk that changed history.

View a slideshow of images from the new Ignatian camino.

Chris Lowney, part of the Camino Ignaciano project team, is author of Heroic Leadership: Best Practices from a 450-Year-Old Company That Changed the World.

Show Comments (
4
)
Comments are automatically closed two weeks after an article's initial publication. See our comments policy for more.
Grace Cangialosi
8 years 6 months ago
This sounds wonderful, and I'd love to do it some time, but I have a question. The article says the camino is only 14 miles long, but Terry Howard took a month to hike it, and it's being divided into 27 daily segments. That's only about 1/2 mile per day. Was that a misprint, or is the terrain that rugged? I'm only in moderately good shape, but I've hiked 10-12 miles in a day before...
Grace Cangialosi
8 years 6 months ago
My mistake! The opening of the article mentioned a 14-mile hike, but that was just one day's planned hike, not the whole Camino. 400 miles definitely sounds a bit more daunting!
CLAIRE BANGASSER MS
8 years 6 months ago
My husband and I are hoping to walk part of this Camino in June... Very exciting. Your article comes just at the right time. Thank you.
Mike Bossow
8 years 4 months ago
Dear Mr. Lowney, you mentioned a guidebook, witch is going to be published in 2013. Do you have nearer information by now concerning the publishing date? Because I think about walking the Camino Ignaciano this year and it would be nice to have some more detailed information about it. I would be grateful, if you could tell me the state of affairs. Thank you very much, MB