I Remember Mary: Can we revive a classic Catholic name? 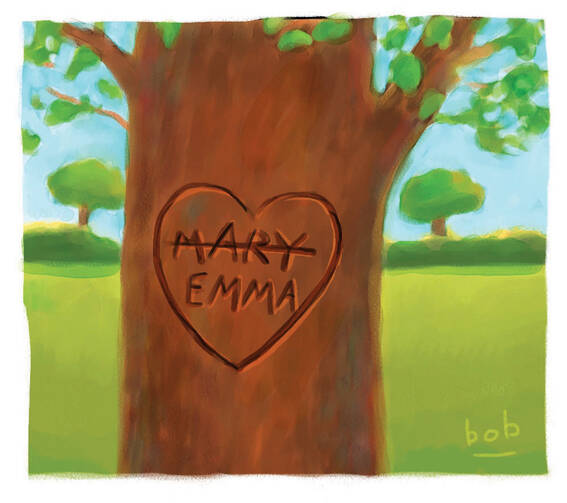 I’m a Mary. My mom is a Mary. My older sister is a Bridget Mary. Although I was born in the decline-of-Mary era, I was never the sole Mary around, because I attended Catholic school, although some of my fellow Marys got to go by their middle names or nicknames. As a child, I wished that I had a “beautiful” name like Heather or Melissa and not plain old Mary. Later, I wished for something unisex, like Quinn, or exotic, like Siobhan.

I never wished to be Mary. Besides, I felt I had been given a “used” name, since my mom and sister had been there first. My dad has always called me Mary Katherine in order to differentiate between the Marys in his life, which I rather fancy. A few friends call me Mary K or Mare, but I’m pretty much “just Mary.” And for years I have been in the good company of many others who share my name. But that is changing. According to an article by Philip Cohen in a recent Atlantic, “In absolute numbers, the number of girls given the name Mary at birth has fallen 94 percent since 1961.” He adds, “In the recorded history of names, nothing this catastrophic has ever happened before.”

Over the years, I have come to love my name. I appreciate that it is so easy to say and spell. I like meeting other Marys and automatically having something in common. I remember being wheeled into surgery a few years ago and a nurse at my side telling me her name was Mary Jennifer, but she went by Jennifer. “Mary Jennifer?” I asked her just before the drugs took me down. “Do you wish you went by Mary instead?” I see her nodding and laughing in slow motion. I like noticing how many Mary authors there are and hearing Mary songs—”Jolly Holiday” from Mary Poppins being my personal favorite. Of course, there is always the fact that Mary is the name of the Queen of Heaven. I don’t mean to brag, but it is, technically, hands down, the most triumphant and holy female name in all of Catholic history. I gather a certain amount of strength from that.

Still, a Catholic high school teacher told me that she did not have too many Marys, but that she had students with some saints’ names, including ones like Kolbe (after St. Maximilian) and Normandy (related to St. Thérèse of Lisieux). A native of Spain said that she and her siblings all had saint-related names with lots of Marian references (such beauties as Pilar, Dolores, Concepción and Remedios) but that the next generation of children were not so named.

So why is Mary in precipitous decline everywhere—even (gasp!) in Ireland, where only 106 Marys were born in the year 2011? Baby-naming has become a bit of a competitive sport, it seems, with everyone trying to express their own personal esthetic through the monikers of their offspring. Catholic children no longer have to carry saints’ names—the rule is that a child who is to be baptized not be given a name “foreign to Christian sentiment.” In other words, Everleigh or Mason is fine but not Lucifer.

I would like to see a return, especially for Catholics, to lots of Mary naming in conjunction with what I consider to be old-school classics like Francis Xavier, Ignatius, Aloysius, Bernadette, Theresa (two of these) and Patricia. Since old-time names like Ruby and Henry and the like have become so popular, why not have a baby Patty? Or Joe? Perhaps there is some value in recognizing that we are all inherently unique, but a name is something that should be solid, formidable and pointing toward greater aspirations of the heavenly variety. Maybe I’m old-fashioned that way.

Mary may well stage a comeback. There is some chatter in the Internet-name community that she may be ready for dusting off and restoration. With “baby name regret” on the rise, I would suggest it as the most classic choice possible and, for Catholics, the most meaningful. I would even go so far as to say that Marys made this nation in the form of swarms of Mary-named nuns who built and staffed hospitals and schools everywhere.

I was recently telling a friend about my “used-name” feelings and she said: “Well, it’s not like it was something like Daphne. That would have been weird. It’s the Mother of God!” It’s true, I mused. Then I discussed the topic with my mother, Mary Sr., who lamented the dearth of Marys, though she noted that she hasn’t seen the same decline in the Hispanic community. “They haven’t given up on Maria,” she said. I asked her why she gave me my sister’s middle name. “That always struck me as bold,” I said. She said, “Well, since you were the sixth child, and we knew you were going to be the last, we just decided to name you after me.” Oh. Turns out I mistook “glorious” for “used.” Do not make the same mistake, America. We need Marys now more than ever.

Show Comments (
3
)
Comments are automatically closed two weeks after an article's initial publication. See our comments policy for more.
Helen Smith
8 years 6 months ago
"It's a Grand Old Name" by George M. Cohan My mother's name was Mary, she was so good and true. Because her name was Mary, she called me Mary, too. She wasn't gay or airy, but plain as she could be; I'd hate to be contrary, and call myself Marie. For it was Mary, Mary, plain as any name can be; But with propriety, society will say 'Marie'. But it was Mary, Mary, long before the fashions came: And there is something there that sounds so fair, It's a grand old name! It's (still) a Grand Old Name.
Ann McGlone
8 years 6 months ago
Dear Mary - I really enjoyed reading your article! My sister, aunt and a couple cousins are named Mary. When I found out I was pregnant with a girl, my first and only name choice was Mary. I love all the Mary's in my life! It is a beautiful name, and it does get a little confusing at family get togethers but we make it work. My daughter is now 10 and she goes to a Catholic school. I think there might be a couple other Mary's in the school but I haven't actually met any, although she has already had two teachers named Mary. I do hope the name does come back in style. Thanks again for your lovely article! Ann in Seattle
Mary Valle
8 years 6 months ago
Thanks for the comments! I've enjoyed hearing from many fans of the name Mary -- perhaps it *is* due for a comeback!