I’ve Got Mail: On the art of letter writing 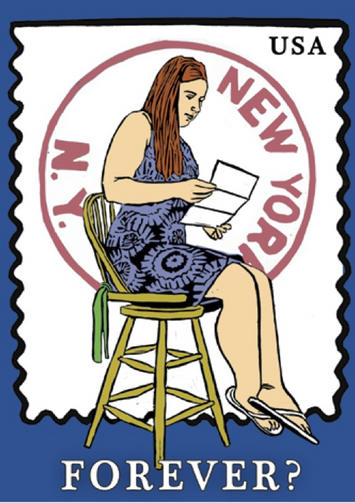 The U.S. Postal Service announced in February that it would discontinue Saturday deliveries. When members of Congress strongly protested, the post office suspended its plans, but the reprieve may be short-lived. Polls show that most Americans approve of cutting Saturday delivery.

My fellow citizens seem happy to help the postal service save $2 billion annually by forgoing another day of sorting through bills and catalogs. I suppose I would feel the same if not for the sense of anticipation I have every time I check my mailbox. For often, tucked in the midst of the junk, I find a real letter, address scrawled across the front, a handwritten note over the seal (my favorite: “Brace yourself for the lamest letter in the history of letters”), stamp askew.

For the past eight years, I have kept up a regular, sometimes daily, correspondence with a friend. It began in 2005 as a Lenten discipline, a letter-a-day for the 40 days of Lent, but through that intense first run, writing letters became a habit, and we have been writing ever since. So now I have an odd fondness for the big, blue boxes, which stand like tributes to a bygone age, on fewer and fewer street corners, and regard my own mailbox as something of an oracle. On any day it could offer up a missive from my friend on the state of her soul or the burden of doubt or how the sky that afternoon and a thought of God and her aching heart came together in such a way that she had to get it down in writing before the moment was lost to time. And somehow it is difficult to imagine these letters coming through e-mail or having the same effect if they did.

Even harder is imagining some of the great epistolary writers texting their thoughts. When I think of Flannery O’Connor on her farm in Georgia, I imagine her simple desk, wedged behind her bed, the window open to the hot breeze, peacocks screaming from the rooftop and yet a great verbal calm over everything, only her own thoughts clicking out on the typewriter and filling the room with sense. And then I imagine those lines she wrote to Louise Abbot about the difficult but necessary way of doubt: “You arrive at enough certainty to be able to make your way, but it is making it in darkness. Don’t expect faith to clear things up for you. It is trust, not certainty.”

Or imagine St. Teresa of Avila alone in her cell, all wood and white and stone, writing to Señor Lorenzo de Cepeda. Thinking she might be quoting St. Augustine, she tells of the spirit of God, which “passes without leaving any mark, like an arrow which leaves none in the air,” and then brightly mentions a hair-shirt, which she is sending along to help Lorenzo prevent distraction and revive love.

St. Teresa closes the letter with a line so funny and self-aware it makes her sound very much like O’Connor’s spiritual mother. “I cannot help smiling,” she says, “to see how you send me sweetmeats, delicacies, and money, and I send you a hair-shirt!”

Or even earlier, imagine St. Augustine himself, in the unimaginable quiet of the fourth century, quill in hand, writing a long letter on the nature of prayer to the widow Proba. “It is said that the brothers in Egypt have certain prayers, which they recite often,” he writes. “But they are very brief, and are so to speak, darted forth rapidly like arrows, so that the alert attention...does not fade and grow heavy.”

Would those lines have had the same effect had they popped up in Proba’s inbox? Or would we still be reading O’Connor’s grim words of hope if Louise Abbott’s iPhone had announced their arrival with an 1980s-synth-song ringtone? No, we would not be reading them, they would not have the same effect, because I doubt those lines would have been written at all. Maybe all this could be dismissed as simply pious nostalgia for an earlier time of ink and wood and quiet afternoons. And of course there is some of that—a naïve longing for a time we only imagine was simpler or at least less loud—but I do not think that is the whole story.

I recently came across a beautiful essay on letter writing by the essayist Vivian Gornick. She says, “A letter written in absorbed silence is an act of faith.” Absorb comes from the Latin absorbēre, which means to swallow up, devour, submerge or gulp down. Imagine such a silence, so incompatible with the frenzy of digital talk! Imagine swallowing it down and enduring it (yet another meaning of absorb), holding it in long enough that your own thoughts begin to swell and spread out. Imagine, then, the longing you would have not to be so alone with your thoughts. And then it becomes clear why writing a letter is an act of faith—for in order to devour that silence and convert it into thought, you must be able to believe in the possibility of response.

The twin desires of letter writing—to make meaning from silence and to receive a response—are really religious longings. One of my favorite poems by Randall Jarrell describes a sick child in his bed trying to imagine a letter he would most like to receive. But nothing he can dream up, not even a letter from outer space, satisfies him, for they are all products of his own mind. In the end he cries out, almost like he is praying, “All that I’ve never thought of—think of me!”

Writing a letter or receiving one from a friend will never quite satisfy us, just as in prayer our hearts will forever remain restless. But it will give us some foretaste of what it will one day be like to be submerged in silence and then finally come face to face with all we had never thought of.

In 1920, when the mail arrived seven times a day in Brooklyn and at least twice a day everywhere else, letters may have seemed like an intrusion. But now, silence of any sort is hard to come by. We even carry the chattering world in our pockets when we take a walk in the woods. And I am no different from anyone else. Yet, when I manage to sit down to read a letter from my friend or compose one of my own, the feeling is much like that moment when I finally kneel down and pray, that a little sense and silence has been allowed into my otherwise hectic day.

When the day comes when the blue boxes stand dormant on Saturdays, it will be a sign to me that the world has become a bit less capable of silence, and the possibility of response more distant.

But in some sense I am being ridiculous. There is no need to blame the policies of a struggling pseudo-governmental agency when the problem is really me. On any given day there is nothing stopping me but my own bad habits from unplugging the computer, shutting down the phones and taking a few gulps of quiet, letting my own thoughts take shape or, better yet, just sitting with the silence in the hope of response.

Amy Andrews, a recipient of the Annie Dillard Award for creative nonfiction, is the co-author with Jessica Mesman Griffith of Love & Salt: A Spiritual Friendship Shared in Letters (Loyola Press).