Hope and Joy-Joy: Experiencing the Gospel in Manila

Hope and Joy-Joy: Experiencing the Gospel in Manila 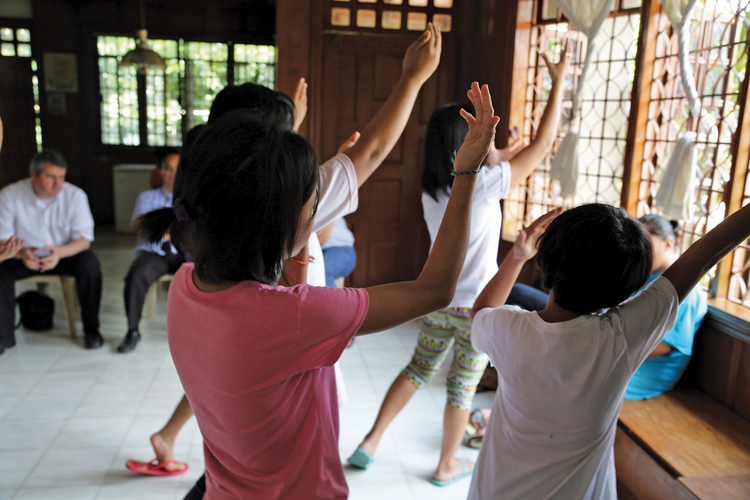 ‘What can possibly make a difference in these kids’ lives after all they have been through?” I asked. The director of the children’s shelter we were visiting that Sunday morning took her finger off the “enter” button she was using to flick through a PowerPoint presentation and sat back in her chair. She exhaled at the ceiling, perhaps scanning the slides in her head of all the kids she had dealt with over the years, suddenly focused on the summons before her. “For these girls, it’s hard to tell. Perseverance I would say is important, but not always. It’s about teaching them how to cope. Oh, and loving them.”

The children’s home we were visiting that morning blended purposely and perfectly into this suburban subsection of Manila. For over 15 years, the “Home of Hope” had rescued and sheltered some 600 of the Philippines’ most forgotten daughters. For me, the visit was another stop on my trek through global suffering and the Catholic Church’s response. Like hearing confessions, there was seldom anything new or shocking in these concocted drive-bys. But in terms of my odyssey through the sheer messiness of other people’s lives, I might have found, in the Home of Hope, the holy grail.

Abused and exploited children present a particular case of messiness, one that is hard to compare with poverty or disease, with or without a recent typhoon. It also has the distinction of being a subject close to my church home. The intentional strangling of a person’s identity before it ever has the chance to appear should be too horrible for anyone to contemplate and a sure sign that evil comes from or leads to hopelessness. Where might hope show itself this morning? I wondered, smiling as the home’s residents greeted me warmly. What could really bring about change in mangled lives? What could move things along? What actually gets people through? If a change serum could be discovered, then surely this home for abused and abandoned street children was a good place to look for it.

The format for visitors like me at the Home of Hope (and so many places like it) was standard: a brief presentation by the director followed by a mini-“X Factor” show by the residents. Gifts, applause, juice and a cookie and we’ll say farewell, never to see each other again. All in approximately 90 minutes.

Stories came pouring out describing unrelenting cruelty, and any hope that change was possible for these girls and young women grew so foreign as to seem absurd. I became distracted by a menagerie of stuffed toys looking down from the top of the filing cabinet in the corner. It was presided over by a brown plastic teddy bear atop which someone had squashed a tiara. The bear looked indignant—resigned perhaps—like so many dolls and animals obliged to go along with the whimsical dress-up games of their owners. But why had he wound up in the director’s office next to a bottle of perfume and a bouquet of plastic flowers? What had he done wrong to warrant such quarantine, apart from the tiara business perhaps? Had he stolen it? What kind of a bear does such a thing? I wondered. What’s going on?

I tuned back in, alighting on the story of one of the residents in particular—it is easier to fix on a few core issues that way, I have found, and provide a moving story afterwards. I was—in this instance—a chronicler, after all. The director was sticking to statistics and trends, and I wanted to know the “what” of this untold story. I probed for specifics.

Joy-Joy was born on the streets—literally on the streets. Abandoned early on, she found her way to one of Manila’s large cemeteries, which she called home, bedding down each night on a piece of cardboard laid on top of a gravestone. She was one of thousands of Manila’s stewards of the dead. They are crammed into a grim residency within the capital’s cemeteries—except for the month of November, when they all politely vacate their tombs so the city’s bereaved can come and recite a simple Ave for the eternally resting.

Joy-Joy was truly stateless. She was Filipina for sure, verified by the many people who talked about her and her kind in Congress and on television. She was Filipina in that she was a Filipina problem. Joy-Joy was stateless in that she possessed none of the fundamental attributes that make somebody who they are. Or to be more precise, she had them; she just didn’t know what or who they were, which is tantamount to the same thing. She had come from nowhere and no one.

She had no name. So she went by a nickname until recently, when she claimed her constitutional right to acquire a surname; she decided on the one used by a volunteer she had grown close to in the shelter. She combined her nickname with that borrowed name: Joy-Joy Seng.

With no traceable relatives, no history and no paper trail, Joy-Joy had no birth date. This created two problems. First, she didn’t know how old she was. In fact, when she came to the refuge she was sent for a bone scan to calculate her age. I surmised that it makes perfect sense to use a bone scan to calculate the age of someone from a cemetery. But to use it on someone who is still alive was macabre.

So, after figuring out her age, the next trick was to keep track of it. For this, one needs a birthday. Joy-Joy was allowed to pick hers. She selected Dec. 25 because it was the birthday she felt people would remember. A real amateur in the affection business, Joy-Joy failed to realize that Christmas babies always get shortchanged. I remonstrated with the director. But Joy-Joy had simply wanted to share in Jesus’ special day. And what was I worried about anyway? Who celebrates their first birthday at age 11?

The abuse she had suffered had caused massive psychological scarring, requiring constant treatment that included heavy medication. Still, Joy-Joy had run away from the shelter more than a dozen times, harming herself frequently, mostly by cutting, but more recently by drinking a bottle of perfume. This explained the tiaraed Teddy Bear’s solemn guard over the perfume bottle in the director’s office.

During her latest flight from the Home of Hope, Joy-Joy had become pregnant. Transition from the apparent independence of the streets to an ordered routine designed to foster a common life among the 25 residents had been less than smooth for Joy-Joy, as it is for many of her fellow street survivors. The shouting fits and trauma attacks by and among the residents are a feature of the journey from where they came from to where they are headed. Complaints from Joy-Joy and company’s esteemed neighbors, however, had grown so loud that the authorities were running them out of the suburbs to the outskirts of town. Joining the call for their ouster was the city’s mayor, who lived a couple of blocks away, as well as more than one member of the National Congress. I wondered what the opposite of neighbor might be.

The briefing part of the visit had gone on far too long, largely because I pestered the director on the means needed to mediate between the normative and the alien worlds being described. The younger residents had begun to peek around the open door of the director’s office where the briefing was taking place, wondering when they would get the chance to perform a song for the visitors as rehearsed.

I kept coming back at the director, badgering her for the formula to the change serum that would help me understand not just their world but also this world, my world. I had run through some usual scenarios from natural selection to God’s will, presuming a basic belief in human goodness and a desire and ability of every human being to recognize what was good for them.

Such explanations all seemed unsatisfactory, and not for the first time. And then the director paused, as if annoyed, and took a deeper breath than usual. Gazing at the desk between us, she curled her bottom lip between her teeth and shook her head slightly and once. Then she slowly placed her hand palm-side down on the desk like a counselor moving me toward a breakthrough: “We help them to build a bridge that can bear the load of their impossible questions and then we wait—patiently—for answers to come.”

I stared at her hand with the fingers spread out as if protecting as much of the desk as possible and coughed out one last protest: But how do you build a bridge when you’re under water? How does everyone not drown? This preacher was going to need some fresh magic.

I sat through the concert, offended by the lyrics the residents lip-synched: “I got gloss on my lips, a man on my hips.” At the same time, it was hard not to be charmed by their coy confidence. Joy-Joy sat this one out because of her advanced pregnancy.

The briefing had been intense and draining. Scanning the room and taking in the performance, I now felt oddly guilty, not just for what I knew about Joy-Joy but because I sensed that she knew that I knew. Knowing Joy-Joy, I felt responsible for having done nothing. Was this the genesis of the change I was looking for?

Joy-Joy had spoken of two perfectly normal reactions when asked about giving birth. First, she said she was afraid. And second, she said she was excited about having the baby. That’s nice, I thought, even though baby Luisa would likely be put up for adoption soon after her birth.

Joy-Joy was not thrilled about being a new mother as such or about having a child to call her own. Rather what offered Joy-Joy some brand-new, actual delight was the prospect of having—for the very first time—the certainty that she was connected in a vital way to another human being. Being sure that she belonged to someone was to Joy-Joy something full of promise.

You see, knowing is beyond imagining. Knowing jostles with mystery, shucking it. Knowing is something to be pursued and seized. Knowing enables us to tell the untold stories that mediate meaning between our world and us, making sense of both. Knowing makes us responsible. It goes beyond seeing and feeling: it forces us to understand and then to act. Everyone wants to know and be known.

Hope for Joy-Joy welled up in me with the possibility of her knowing and of being known, a kind of knowing that incorporates the merely carnal and makes it holy. Genuine novelty had presented itself in the patience practiced in the Home of Hope. Fresh magic may not, in fact, be called for because in some real, even heart-breaking places there are answers to impossible questions.

This article also appeared in print, under the headline “Hope and Joy-Joy,” in the March 23, 2015, issue.