His Final Act: The Catholic connections of Tennessee Williams

His Final Act: The Catholic connections of Tennessee Williams 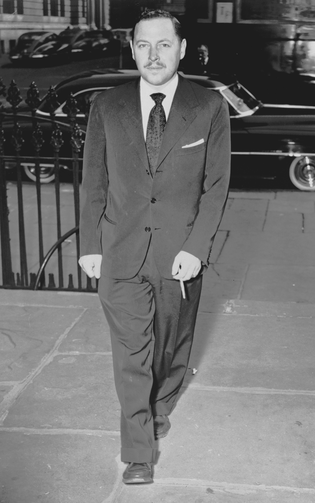 March 26, 2016, would have been Tennessee Williams’s 105th birthday. The esteemed and infamous playwright, known for works like “A Streetcar Named Desire” and “Cat On a Hot Tin Roof,” was born in Columbus, Miss., in 1911. But his attempt at a rebirth of sorts happened on Jan. 10, 1969. That was the day he was received into the Catholic Church by Joseph LeRoy, S.J. The event points to a little-known spiritual side of a man whose life at times seemed to contain as much drama as his characters’.

As in any good drama, the event was not without controversy. The process was instigated by Williams’s younger brother, Dakin, who had converted to Catholicism when he was doing military service during World War II. The older Williams had only recently recovered from a near-fatal bout of Hong Kong flu. While we cannot know what was in his heart, the illness may have caused a reckoning with his mortality and also served as a reminder of his comment to his brother that he hoped one day to have a deathbed conversion to Catholicism.

Dakin contacted Father LeRoy, pastor of the Church of St. Mary Star of the Sea in Key West, Fla., where Williams lived, who agreed to visit him several times. Williams was heavily medicated at the time of the priest’s visits but expressed the hope that a Catholic baptism would help him “get [his] goodness back.” Yet the baptism was, technically speaking, conditional, as Williams had already been baptized in the Episcopal Church as an infant by his grandfather, the Rev. Walter Dakin. Although the Catholic Church recognizes the validity of other Christian baptisms, Father Leroy said that “it was Mr. Williams’s wish, in the interest of his own spiritual and emotional needs at the time, that the rite be repeated.”

The second baptism does not seem to have lived up to Williams’s expectations and did not have any obvious effect on the playwright’s lifestyle. As he later said, “I have always loved the richness of the Catholic ritual, the aroma of the incense, the splendor of the art.” But he did not feel the same admiration for the doctrines of Catholicism. His prebaptismal confession was, in Father LeRoy’s words, the shortest confession he had ever heard.

Williams never became much of a churchgoer, saying that he liked to pray in the quiet of empty churches, claiming that large congregations disturbed him. He later said, “I loved the beauty of the ritual, but the tenets of the church are ridiculous.” A strange sort of conversion, indeed! He whimsically admitted later on—at the time of the “God is Dead” movement—“I do believe in God, and I don’t think he’s dead like people say. But I don’t know where he is or what he’s doing.”

Williams chose St. Francis Xavier as his patron saint. Perhaps this was because he was a direct descendant of a younger brother of St. Francis—Valentine Xavier—who migrated from Spain to France in the 16th century, where the offspring of the Xavier clan become Huguenots. In the wake of the St. Bartholomew’s Day Massacre, when many Huguenots were slaughtered, the family fled to England, where their name was Anglicized to Sevier. In 1730 one of the descendants, also named Valentine, fled to America. (Williams named the hero of his first professionally produced play, “Battle of Angels,” Valentine Xavier.)

In the month following his Catholic baptism rite, Williams went to Rome, where he met the superior general of the Jesuits, Pedro Arrupe. (A Jesuit present at their meeting once told me, “You should have seen Arrupe’s face when Tennessee Williams informed him that he was a blood relation of St. Francis Xavier.”)

Yet, despite his hopes for the transforming power of the sacrament, Williams continued to struggle with alcohol and drugs, which only intensified as the years went along and his plays were not well received. Finally, back in New York City and staying in the Sunset Suite of the Hotel Elysee, Williams died on Jan. 25, 1983. He was found surrounded by pills, yet it is uncertain whether his death was accidental or a suicide.

Williams’s body lay in state at Frank E. Campbell’s funeral parlor on Madison Avenue in New York in a simple Orthodox Jewish wooden coffin, with a Russian icon in his folded hands. On March 5 more than 1,200 mourners attended the Mass of Christian Burial for Williams in St. Louis, Mo., in the magnificent Byzantine-style Cathedral Basilica. The presider and homilist was Msgr. Jerome Wilkerson, a long-time friend of Dakin and his mother. The Scripture readings fittingly dwelt upon the flesh and dying, constant themes in Williams’s dramas.

The courage, the beauty, and the truth uncovered there gave them a new hope and motivation. Tennessee’s words got through to them, convinced them that they were not alone.... And perhaps most important of all, they learned that someone understood. Someone read the secret recesses of their heart and still affirmed them, cherished them, and cheered them in their anguish and struggle.

Contrary to his wishes, Williams was buried in the main Catholic cemetery in Saint Louis, Calvary Cemetery. He had asked to have his body taken out into the Gulf of Mexico and dropped into the sea, where one of his literary heroes, the deeply troubled early-20th-century modernist poet Hart Crane, had died at the age of 33. According to witnesses, Crane had jumped overboard, saying, “Goodbye, everybody.”

But Dakin defied those instructions and had Williams buried only a few yards away from the grave of their mother, Edwina, with whom Williams had struggled and who most critics agree was the model for Amanda Wingfield, the constantly anxious and domineering matriarch in his play “The Glass Menagerie.” John Lahr, in his definitive biography, Tennessee Williams: Mad Pilgrimage of the Flesh, captures the irony of the situation:

And so it came to pass that Tennessee Williams was buried in the city he called “St. Pollution”; an Episcopalian by birth and a Roman Catholic by conversion, he went to his resting place in a Jewish coffin marked by a gravestone emblazoned with an Orthodox cross. The man who had wanted to be absorbed back into the Mother Ocean ended up spending eternity next to his mother, the woman he’d fled and kept at a distance for a lifetime.

The many studies of Tennessee Williams’s life, including his own memoirs and a biography by Dakin, display the tempestuous and troubled life of the man. We can only hope that somewhere deep down in Williams’s soul the grace of his baptism supported him and granted him entrance into the paradise that God has promised to the compassionate.

Show Comments (
3
)
Comments are automatically closed two weeks after an article's initial publication. See our comments policy for more.
Bert Clere
3 years 10 months ago
Great reflection. Williams' sexuality placed a large barrier between him and traditional Christian doctrine. There's a profound tension in Williams' plays between the brutality of human behavior and the desire for grace and companionship. It's some of the same searching that Christian theology concerns itself with.
Barbara DeCoursey Roy
3 years 10 months ago
"Sometimes --there's God--so quickly. "
William Rydberg
3 years 10 months ago
I am very comfortable with Jesus' teaching that He is the final Judge. Blessed be the name of the Lord and may the souls of the faithful departed rest in peace. Amen... Christ is Risen! Alleluia! Alleluia! Alleluia!
Advertisement

This article also appeared in print, under the headline “His Final Act,” in the March 28, 2016, issue.