In confronting its history with slavery, Georgetown University offers a model for moral leadership. 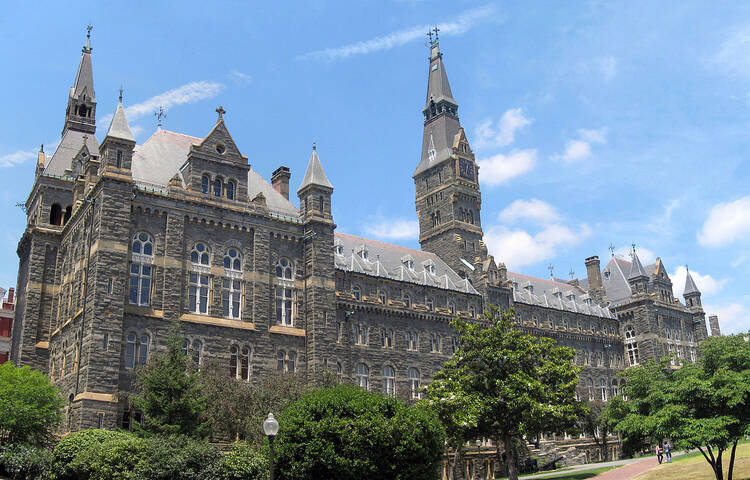 The United States is looking for leadership. Donald J. Trump was finally forced to admit that President Obama was born in this country and is a legitimate commander in chief. Hillary Clinton regrets calling “half” of Mr. Trump’s supporters “racist, sexist, homophobic, xenophobic, Islamophobic,” now suggesting that fewer are “deplorable” and “irredeemable.” Mr. Trump makes deplorable racist, sexist, xenophobic and Islamophobic comments, but it is unwise to assign the sins of a candidate to Americans you hope to lead. These depressing developments reveal character and judgment to consider along with crucial differences in temperament, experience, knowledge and policies.

In searching for leadership, I have found it not on the campaign trail but, ironically, one floor away from my office at Georgetown University. I had known that Jesuits owned slaves in Maryland, but that realization went from a footnote to a headline when I read last April on the front page of The New York Times:

The human cargo was loaded on ships at a bustling wharf in the nation’s capital, destined for the plantations of the Deep South. Some slaves pleaded for rosaries as they were rounded up…. But no one was spared: not the 2-month-old baby and her mother, not the field hands, not the shoemaker and not Cornelius Hawkins, who was about 13 years old….

[T]his was no ordinary slave sale. The enslaved African-Americans had belonged to the nation’s most prominent Jesuit priests. And they were sold, along with scores of others, to help secure the future of the premier Catholic institution of higher learning at the time, known today as Georgetown University.

This was personal. Slavery was no longer a vague national shame but involved 272 particular human beings sold at a particular time for a particular purpose. We now know they were sold by the Jesuits to help meet financial needs of the institution I am a part of today. This is a powerful and personal example of “white privilege.”

America has covered Georgetown’s response. Students protested and organized. Others researched and shared the stories. The Working Group on Slavery, Memory, and Reconciliation, with members of diverse backgrounds and perspectives, acted quickly and conscientiously to develop a comprehensive set of recommendations for action.

These efforts were matched by principled and courageous moral leadership by the university’s president, John J. DeGioia. Mr. DeGioia spent part of his summer meeting in Spokane, Wash., and in New Orleans, Baton Rouge and Maringouin, La., with descendants of the 272 who were sold. He called those encounters “one of the great privileges of my life” and humbly acknowledged “our shared history” and “shared membership in our Georgetown community.”

On Sept. 1, Mr. DeGoia not only offered a comprehensive and passionate response, accepting and advancing the recommendations of the working group; he also called on Georgetown to continue to confront racial injustice. This kind of leadership is exceptional. I was working at the U.S. bishops’ conference when the sexual abuse scandal broke. I know the difference between denial, delay and institutional protection on the one hand, and leadership that acknowledges fundamental failures, accepts institutional responsibility and takes concrete steps to make things right on the other. This leadership flows from Georgetown’s Catholic mission and Jesuit identity. Sadly, it was Jesuits who owned and sold the slaves, but it is the Jesuit values of discernment, dialogue and a faith that does justicethat are guiding this search for a moral response.

Mr. DeGoia rightly insists this is just a beginning and more discussion is needed, especially on right relationships with the descendants. But almost all acknowledge that this is an unprecedented effort by a major institution to own up to and act on its participation in and benefits from slavery.

Our nation desperately needs moral leadership. In a demoralizing election year, I take hope in watching from up close faithful, bold leadership on a fundamental American challenge: addressing the reality, legacy and continuing impact of slavery, not only at Georgetown but across our nation. There are lessons here for the candidates and for all of us.