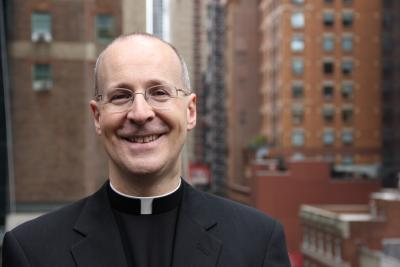 Lately, though, I’ve been thinking that we could add some other events from Jesus’ life: all the times he gets angry.

There are so many times Jesus shows anger that we could legitimately add another series of mysteries to the Rosary, in addition to the joyful, the sorrowful, the glorious and the luminous. We could call them the “furious mysteries.”

Some Christians have a hard time with Jesus’ anger. It’s a mystery to them. The cleansing of the Temple can be particularly disturbing, given its physical depiction of anger. Others find this a wonderfully bracing passage. It shows that Jesus is human—passionate. No matter what you think about this passage, you have to agree: this is not a bland, unthreatening, boring Jesus.

Unfortunately, some Christians use that particular incident as an excuse for violence, for judging other people, for being rude or simply acting like a jerk. When confronted with opposition, they’ll strike back and say, “Well, I’m angry just like Jesus was in the Temple, and I’m overturning the tables!” But when people oppose you, it may not mean you’re a prophet like Jesus. It may just mean that you’re wrong.

These passages, then, can be mysterious. So let’s examine Jesus’ anger.

First, there’s nothing sinful about being angry. Yes, anger is one of the seven deadly sins, but I think that has to do more with unbridled anger, free-floating anger, violent anger. Anger is a natural human emotion. If you don’t get angry once in a while, you’re not human.

The questions are, Why are you angry? and What do you do with it? In the Gospels Jesus is never angry on behalf of himself. At the Crucifixion, for example, he does not get angry at those who are executing him. He forgives them. Earlier in the Passion narratives, he utters not a word when he is mocked and spat upon by the soldiers. He says nothing in his defense. If there was ever a time for him to get angry, it would be then. Rather, Jesus’ anger is always on behalf of others.

Jesus’ anger is a righteous anger. Ours is more frequently of the selfish type, the result of an offense to ourselves. Of course we need a healthy love of self and a care for the self. So sometimes a strong response to injustice is justified. On the other hand, if someone cuts in line at the drug store, that does not mean you need to punch the person in the face. So the questions are: Where is the anger coming from? What is the most Christian response?

In the end, the furious mysteries may not be so mysterious. Jesus’ anger is not so hard to understand. Jesus is human. Anger is a natural part of life. And his anger is a righteous anger. It’s good for us to remember all those things so that even if we feel like it, we may decide that those tables do not need to be turned over after all.

James Martin, S.J., is editor at large of America and author of Jesus: A Pilgrimage. Twitter: @jamesmartinsj.

@jamesmartinsj
Show Comments (
6
)
Comments are automatically closed two weeks after an article's initial publication. See our comments policy for more.
William Atkinson
6 years 6 months ago
Quite an Imagination there Fr. Martin, I guess if you looked at Jesus from Roman, Jewish church leaders and Herodian political viewpoints you could call him and his followers (those that stuck around) one of the most sought after rebels and terrorists of his time, who mostly due to loss of one of their companions and Jesus's cousin (the Herodians cut [beheaded], like ISIS today, his head off) and portrayed this band of trouble makers as the highest level of anti-socialist in the region, who advocated disrupting the norm. Does this sanctified ANGER, mean that anytime someone uses this excuse for ANGER, that it is divinely righteous justified way to settle disputes and who or what organization is the arbitrator of this righteous justified anger. I suppose if Jesus was here today officials would have Him in Anger Management Classes, as looking at his whole life he was from teenager to adult an uncontrollable individual with many many inert radical social problems quite uncommon to the life and times where he lived. The rulers of His times (governance, state, local, and church) eventually realized that to keep peace and tranquility in their lands they needed to rid themselves of this angry individual before He and His gang (followers) continued to create disturbing chaos and unrest in the community and lands.
Chris NUNEZ
6 years 6 months ago
"Nice people drive people crazy." People in power use 'nice' because they are in control. Jesus made an impact, and with the exception of the 'cleansing of the temple' all his other outbursts were verbal expressions of anger. There are times when telling people their badness, holding them accountable requires strong words, and Jesus used strong words when he was in the position to do so in order to be heard. I've found those scenes/passages in Scriptures fortifying when up against people in power who use 'nice words' but need to be challenged. And of course, it requires being prepared for the reaction when 'nice people' with power don't like being called out. There is a price to be paid, and one has to be willing to pay it.
Bruce Snowden
6 years 6 months ago
There are Seven Capital Sins. They are, Pride, Greed, Gluttony, Lust, Sloth, Envy, Anger. There are also Seven Capital Virtues. They are, Humility antidote to Pride, Liberality antidote to Greed, Temperance antidote to Gluttony, Chastity antidote to Lust, Diligence antidote to Sloth, Kindness antidote to Envy, Meekness, antidote to Anger. I never realized that Jesus expressed the human passion of Anger so often, sinlessly of course, “like us in all ways except sin.” This means I would say, that human Passion intrinsic to all the Seven Capital Sins each in its own way, may be expressed sinlessly, through the moderating influence of the Seven Capital Virtues. For example, Jesus said, “Learn of Me for I am meek and humble of heart.” There we see focused the reality that Jesus was not an angry or proud man out to zap opponents, but by his own admission he practiced the Capital Virtues of Humility and Meekness. Clearly his Anger was simply a tool used to carve a teaching on stony hearts! That Jesus got angry sinews Mary’s “fiat” giving credence to what Nicene proclaims him to be, not only truly God, but also “true man.” I find that humanly salvific, hopeful, a reminder that we have in Jesus a High Priest compassionate to what often is the human moral dilemma in search of righteousness. Thanks Fr. Martin for pointing this out to us.
Martin Eble
6 years 6 months ago
The capital sin we call in English “anger” is the desire for vengeance, in Latin “acerbitas”, bitterness, the root of the English words “acrimony” and “acerbic”. The sin involves taking upon ourselves something reserved to the Creator, seeking to wreak vengeance upon someone not deserving it, or in conflict with the law, or from an improper motive such as embarrassment. The sin is opposed to justice and charity When anger conforms with right reason, anger is not a sin. For example, righteous anger over sins that cry to Heaven - homicide, negligence of the poor, abuse of children, oppression of the the widow and the orphan, slavery, taking advantage of and defrauding workers - which leads us to just and lawful action is praiseworthy.
Molly Roach
6 years 6 months ago
I think that the emotion of anger is a signal that something is wrong. Given different temperaments, we all experience anger a little differently with varying degrees of intensity. As a signal, anger indicates the need to stop and think about what is going on so you can figure out what you think is wrong. Letting it become free floating is like using the alarm system as a regular means of communication.
Lisa Weber
6 years 6 months ago
We should also have the "feminine mysteries", the ones about Gospel stories of Jesus and women. The first would be his defense of the woman caught in adultery. By defending her, Jesus made it safe for women to take part in public life. The second would be the story of the woman at the well. In it, Jesus asks a woman to give him a drink and also offers her a drink. The third would be the story of Mary of Bethany sitting at Jesus' feet as a disciple. This is the story that explains how the role of women in the church will be developed. The fourth would be the story of the sinful woman anointing Jesus with perfume. She was the only human to anoint Jesus. And the fifth would be the story of Jesus appearing first to the women after the resurrection. Women are often the first to see and are often not believed. All of the stories are important and worthy of prayerful consideration.