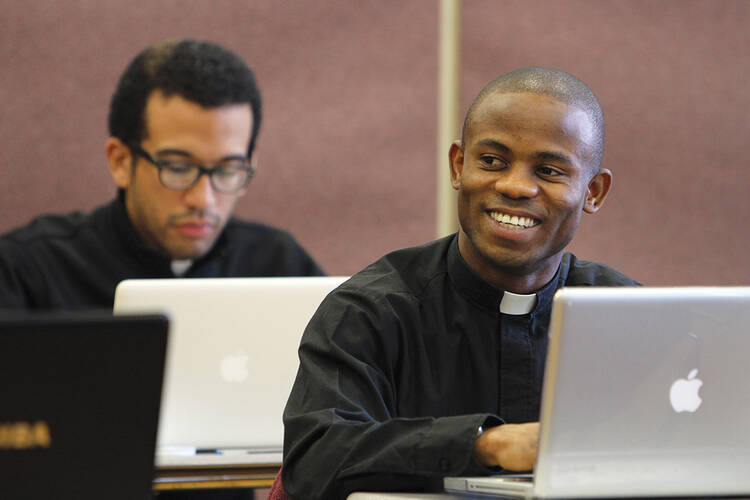 Currently, the Society of Jesus in the United States is reviewing its program for training young Jesuits. This provides an occasion for some questions and reflections on ministerial education in general. After being involved in theological education and after listening to the comments of young Jesuits and other candidates for ordination, both Catholic and Protestant, for over 30 years at the Jesuit School of Theology and the Graduate Theological Union in Berkeley, I offer here some reflections on that training that may help answer the following question: Are we in fact preparing our priestly candidates for the globalized world of the 21st-century?

My basic assumption is that all priests are in service to the church and that the church, in turn, is in service to all humanity (“Pastoral Constitution on the Church in the Modern World,” No. 3). Since the Second Vatican Council, however, the role of the ordained among the people of God has been changing. In recent years, the Holy Spirit has inspired many lay men and women to take up leadership roles in the church. Some interpret this as the “declericalizing” of the church. The church is not the clergy nor the hierarchy; it is the whole people of God. Today’s priests need to understand themselves to be in service to the laity, not the laity in service to the clergy. Furthermore, as Pope Francis has been reminding us, the church is a church that “goes forth,” a church with “open doors”—open to all those outside its confines, the poor, the marginalized, the neglected, those without faith, the seekers amongst the young and the “nobodies” of this world (“The Joy of the Gospel,” Nos. 20-24). Are we preparing them to serve those on the periphery?

The document from the Jesuit curia in Rome that initiated the review of the Jesuit course of studies suggests that there are four fundamental elements involved: context, content, competencies and charism. (The Ignatian charism is appropriated intensely in the first two years of training, a time called the novitiate, but then continuously throughout all stages of Jesuit life.) My concern here is with the changing context and its implications for the content and competencies. My fear is that too much of the intellectual training still takes place in the abstract, prescinding from the context, both local and global. Although I am primarily concerned with our present context, I also think we need to attend more to the context of previous church teaching and theology. For some time now, biblical scholars have taken the context of both testaments quite seriously in the interpretation of their texts. But how seriously do we take the historical, social and cultural context in which much of our theology of the family, marriage and children was formed? For example, much of that teaching was developed in an agricultural world in which children were an economic asset and necessity, when the majority of children died before the age of 5 and when the average life expectancy was less than 45 years. And much of the doctrine on authority in the church was developed in a world that took monarchy, hierarchy and patriarchy for granted.

The ‘Other’ in Our Midst

If we focus on our present context, we can see that our knowledge and understanding of the world has changed dramatically in the last 30 years. The accelerated rate of change and the processes of globalization—variously understood as “the compression of the world in time and space,” or “complex connectivity,” or “the intensification of worldwide social relations which link distant localities in such a way that local happenings are shaped by events occurring many miles away and vice versa”—have changed the horizon against which priestly formation takes place. Ours is a context of radical pluralism. People of another culture or religious tradition who once were thousands of miles and an ocean away are now right down the street. This has made us acutely conscious of the “other” in our midst—people of other ethnicities, other cultures and other religious traditions. This is the lived experience not only of the global elite but of the average person in the pew. Are we preparing our Christian ministers to deal with this new reality?

Further, the new, post-Hubble cosmology has changed our understanding of the age (13.8 billion years) and size (100 billion galaxies) of the universe. Yet much of the imagery depicting the power of the creator God in Scripture and tradition is drawn from the atmosphere and environment of our own tiny planet (for example, Ps. 18 and 104). Evolution is part of our mental furniture, and we are seriously expecting to find intelligent life elsewhere in the universe, yet much of our theology is still very geocentric and anthropocentric. We are much more conscious now than even 15 years ago of the ecological or environmental crisis, as Pope Francis’ latest encyclical exemplifies. As the philosopher Charles Taylor has pointed out, our “social imaginary” has changed dramatically. Has the content training of our young priests changed accordingly?

All this raises questions about what the candidates study, what tools they are given to understand our context, what competencies they need and how well they are prepared to deal with diversity, pluralism and continuing change. But first I want to question the assumption that there should be one program for all students. Smaller numbers of candidates as well as the wide diversity in age and backgrounds call for much more individualized programs, rather than a one-size-fits-all approach. The Society of Jesus in the United States, for example, has had an average of 35 men entering the novitiate each year (45 last year) for the last several years. So it should not be difficult to design an individual program for each man.

There are some things, however, that every candidate for ordination needs to possess—a firm grounding in Scripture for preaching; a knowledge of tradition, how Christianity has developed and changed over the centuries as background for the present practices in liturgy, sacraments, prayer; sensitivity to the moral challenges people face today and the knowledge to help them discern their choices. Each candidate may come with some background in one of these disciplines and not in others. Some come with a background in engineering or law or business but not in the humanities or the social sciences. In addition, every priest is expected to have certain competencies—be a good preacher or homilist, a leader and presider at prayer and liturgies, a compassionate listener and spiritual guide and a servant-leader who can evoke the gifts of all the members of the community. This is a tall order for even the best-intentioned candidate.

If we take the historical, social and cultural context seriously, how would this affect what ministerial candidates study and what competencies they need to relate to our rapidly changing situation? First, it is not necessary to spend so much time studying academic philosophy, which has become highly specialized and no longer gives a broad understanding of the human condition.

They should prepare for inculturating Christianity in the United States by studying the history and culture of this country. Given the religious pluralism of our time, they should be prepared for dialogue with other Christian and non-Christian traditions. An open, ecumenical and collaborative approach to pastoral situations is expected today. Are we preparing them for this? Further, given that our social imaginary is highly scientific and technological, some study of contemporary cosmology and the biological sciences should be included. And the ability to do social and cultural analysis requires some study of sociology and cultural anthropology.

What Every Priest Needs to Know

All of the above recommendations are designed to help ministerial candidates communicate the Gospel in our current context. But what of the more specifically theological disciplines? We need to continue to emphasize the study of Scripture, which is the soul of theology and homiletics. More time and emphasis should be given to Catholic social teaching. Globalization and technological advances mentioned earlier have made the issues of poverty and inequality both within and between nations more urgent, as Pope Francis in “Laudato Si’” has made clear. Students also need to be better prepared to confront the moral aspects of environmental degradation and the problems posed by advances in communication technologies. Less time could be spent on some doctrinal questions that were once urgent but no longer are (the relationship between grace and free will, for example, or eucharistic controversies of the 11th century), and the historical context of all theology should be stressed. Issues about globalization and inculturation are more pertinent now than even 40 years ago, especially regarding liturgy and spirituality. In the area of ecclesiology, collegiality and synodal governance remain the unfinished agenda of Vatican II.

Finally, two recommendations more specific to Jesuit formation, concerning sequence and place. Regency, the time young Jesuits spend in full-time apostolic work, should come right after novitiate. Although it is true that some will need more academic preparation for teaching in regency, that is increasingly less the case. I have heard some say that they left novitiate full of energy and enthusiasm to set the world on fire only to find themselves studying something whose point or purpose they did not see. Nothing is worse than dampening zeal and studying something for which you see no point. A regency experience can teach a candidate what he does and does not know and what questions he needs to pursue. And after hearing continuing complaints about the lack of coordination between first studies and theology, I would suggest that first studies should take place at the same physical location as theology to better integrate the two, and together they should not take more than five years. Again, these suggestions are made on the assumption that the program will be tailored to each individual.

All of the above recommendations can apply, mutatis mutandis, to ministerial candidates other than Jesuits. Finally, one of the motivations for publishing this article is the hope that it will evoke some comments and input from the people of God, the people we serve in our parishes, schools and other apostolic works. They certainly should play a role in shaping what they expect and would like to see in the future ministers in the church.

T. Howland Sanks, S.J., is professor emeritus of theology at the Jesuit School of Theology at Santa Clara University in California.