Fruits of the Earth: Koki Ruiz and an altar of corn for the pope

Fruits of the Earth: Koki Ruiz and an altar of corn for the pope 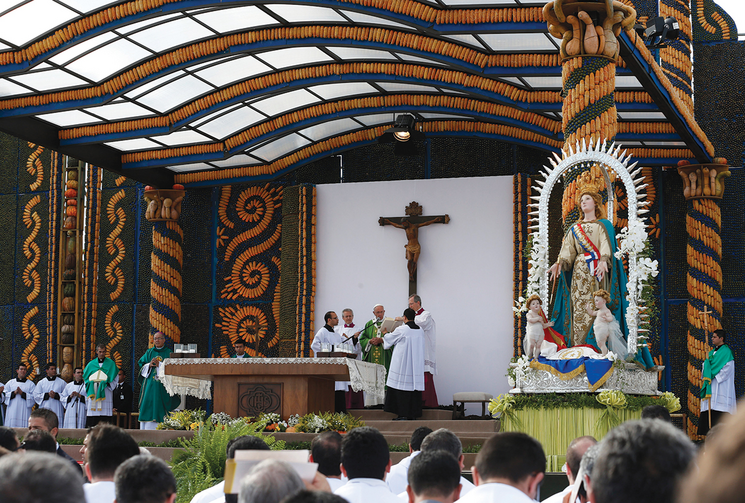 When Pope Francis presided at Mass at Nu Guazu Park in Paragauy in July, he stood in front of a 72-foot-tall, 131-foot-wide corn altar. To create the unique altarpiece, the Paraguayan artist Koki Ruiz used 32,000 corncobs, 200,000 baby coconuts, 1,000 squashes, 771 pounds of seeds and grains—and an overwhelming dose of faith.

“Making it with the fruits of our earth is a symbol meant to make people reflect and think of our earth and the importance of nature,” says Ruiz in an interview conducted in Spanish. “It renews the value the [indigenous] Guarani people gave to the fruits of the earth.”

Ruiz, 58, is a renowned artist in Paraguay known for his picturesque, rural oil paintings and his performance-based art event held annually on Good Friday.

For Ruiz, every element of the Baroque-inspired altar has a purposeful link to nature and the environment, which coincides with Pope Francis’ recent encyclical. Ruiz used corn as the main material because, he said, the indigenous Guaraní people of Paraguay placed great value on it. “They would plant a seed, then the earth would give them millions of grains,” says Ruiz. “In European culture they used gold to gild an altar. For the Guaranís, the most precious and valued thing was the fruits of the earth, so we gilded this altar with corn, replacing gold in its color and shine.”

Ruiz and his team did not use any paint on the entire altar. Colorful seeds and grains were used to create the portraits of St. Ignatius Loyola and St. Francis of Assisi, measuring 8 feet by 13 feet. The image of St. Ignatius was chosen as a way to honor the Jesuit missionaries who converted the Guaraní people, and St. Francis was chosen because of his love of nature and animals, and because it is the pope’s chosen name.

“In order for the altar to represent Paraguay, everybody had to like it and understand it,” says Ruiz. He worked with a team of 20 workers on the altarpiece, but had hundred of volunteers who donated fruit and labor. Ruiz rarely, if ever, uses a first-person pronoun when discussing the work; he takes pride in how many people participated in its execution.

“We opened up our workshop so the people could look at the altar and touch it,” says Ruiz. People traveled from all around the country to come and inscribe their names, messages and prayers on the small green coconuts.

Making art and faith accessible to the masses is a crucial part of Ruiz’s work. He started combining the two in 1992 with his Good Friday event.

“I wanted to make art with the people in my town,” says Ruiz. “I noticed that the way most people here communicate with each other is through shared religious experiences.” He refers to this as “popular religiosity” and says it “fascinated” him to see how everyone connected with each other in their faith. He said that in the 1990s the people in his hometown of San Ignacio felt the Catholic Church alienated the cultural aspects of celebrating their faith and focused solely on theology and reading the Bible.

“I thought that the people needed to express themselves and to feel, and the best way to do that is through their religion,” says Ruiz.

In 1992 he joined his friends and family to walk in a candle-light procession of the Stations of the Cross, chanting age-old Guaraní hymns along the way. Today his Good Friday celebration draws 15,000 to 20,000 visitors, no small feat for a country of six million people and for an event held four hours outside the capital city.

Dubbed Tañarandy after Ruiz’s neighborhood, the participatory event has evolved over the years. Thousands of people gather to line the red dirt road with candles—one per person—made of carved-out orange halves, lighting the way for the two-mile procession.

From 2004 to 2014 Ruiz featured cuadros vivientes, or living paintings, with performers dressed up and recreating famous religious paintings, at the end of the procession. Every year an exhibit would represent Leonardo DaVinci’s “Last Supper,” and then other artists like El Greco or Salvador Dali would be displayed alongside it.

In 2014 Ruiz added a small altar to the event and this year he went bigger, creating a “fruits of the earth” altar that was 29 feet high and served as an inspiration for his papal altarpiece.

“This religious art has changed me and greatly renewed my faith,” says Ruiz. “Experiences like this sustain you and help you and are important because reason can’t give you what faith can give you.”

The Tañarandy event is free to the public, financed by Ruiz because of his desire to have everyone experience art, no matter his or her socio-economic status. He uses his oil paintings to support himself and his family and to fund art events like Tañarandy.

The artist’s figurative oil on canvas paintings capture provincial, everyday Paraguayan scenes from rural life: farmers, musicians, children playing soccer, a mother breastfeeding her child. Ruiz brings warmth and emotions to his tender paintings through his handling of composition and color palette. He sells some of his paintings locally, but also to clients in countries like the United States, Germany, Spain and the Netherlands.

“My paintings always center around Paraguay, but the truth is they are commercial,” says Ruiz, who sells his paintings for $2,000 to $10,000 apiece. “In Tañarandy my art is purely artistic, not commercial at all.”

The corn altar represents the culmination of Ruiz’s participatory artwork. The artist’s intent lies not in the physical architectural structure but in using that structure as an impetus for gathering people together to share a communal, personal and spiritual experience at the site.

“It is the most important work of art yet because we succeeded in getting so many people to participate,” says Ruiz. “The other altars we did, people took pictures, but in this one the people felt like, ‘It is mine, it has my name, I chose where to put my coconut.’”

The international attention the altar received, the government awards he was honored with and even the pope’s praise could not compare to this compliment. For Koki Ruiz, sharing the ownership of his artwork with thousands of Paraguayans has been the mark of his greatest achievement.

This article also appeared in print, under the headline “Fruits of the Earth,” in the October 12, 2015, issue.