Why fighting for religious liberty should not become a culture war. 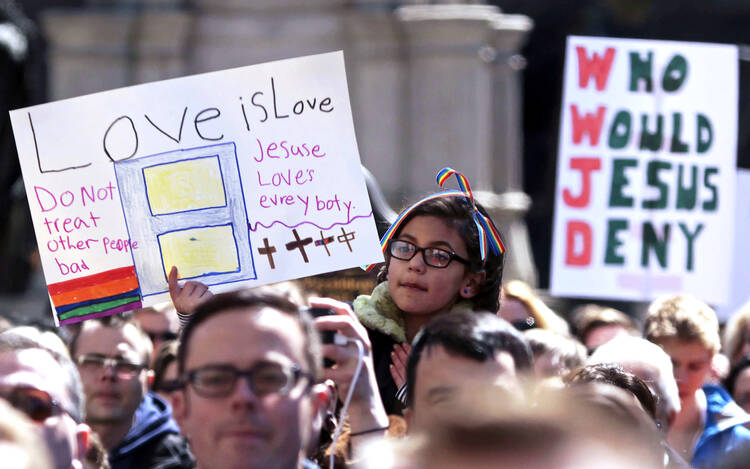 When the U.S. Commission on Civil Rights began research for its report on the “uncertain boundaries” of religious freedom in 2013, Hobby Lobby was just a craft store and Obergefell was hardly a household name. Three years later, landmark decisions by the Supreme Court to recognize both the religious liberty claims of closely held corporations and the right of same-sex couples to marry have given new urgency to the question at the center of the report. How should we as a country balance the sincerely held religious beliefs of people and institutions with the potential for unjust discrimination on the basis of gender, sexual orientation and other markers of identity?

Unfortunately, the findings of the commission’s report, “Peaceful Coexistence,” published on Sept. 7, leave little room for middle ground or dialogue. Most of the authors instead paint a zero-sum world, where antidiscrimination laws are “of pre-eminent importance” and where religious exemptions from such statutes are seen to “significantly infringe upon” civil rights and are used, in the words of Martin S. Castro, the chairperson of the commission, as “both a weapon and a shield by those seeking to deny others equality.” No credible rationale is offered to explain why sexual autonomy should be given primacy of place over religious liberty, despite the latter’s explicit protection under the Constitution.

Further, anyone concerned to preserve the robust religious liberty protections in the U.S. constitutional tradition will be taken aback by Mr. Castro’s charge that the term “religious liberty”—the scare quotes are his—has become a code for “discrimination, intolerance, racism, sexism, homophobia, Islamophobia, Christian supremacy or any form of intolerance.” This is a shockingly confident dismissal of a fundamental American value. Religious liberty is hardly the exclusive purview of Christians and is in many ways most vital for religious minorities with less political clout. And Mr. Castro’s implicit condemnation of views on gender identity and the meaning of marriage held by millions of Christians, Jews and Muslims—and shared by most Americans not so long ago—as beyond the bounds of acceptable public discourse is incendiary and counterproductive to the report’s stated goal of reconciliation. That is a shame because taken as a whole, the report, while nonbinding, advances vital questions about how to balance competing rights and worldviews that will require the good-faith engagement of everyone interested in building a just, pluralistic society.

Among the commission’s recommendations are that courts and lawmakers should tailor religious exemptions to civil rights protections “as narrowly as applicable law requires,” that Congress should clarify the federal Restoration of Religious Freedom Act so that it applies only to individuals and religious institutions and that where R.R.F.A. and equivalent state-level laws do not apply, exemption laws should “protect religious beliefs rather than conduct.”

While a clearer framework for understanding when and to whom religious exemptions apply would certainly be helpful, the commission’s neat separation of “belief” and “conduct” is misguided. The Catholic faith does not end with the sacrifice at the altar or the recitation of the creed but is lived out in schools, hospitals, homeless shelters and countless other ministries of the church. As Archbishop William Lori of Baltimore said in response to the report: “Catholic social service workers, volunteers and pastors don’t count the cost in financial terms or even in personal safety. But, we must count the cost to our own faith and morality.”

Recent experience shows where the commission’s hollowed-out understanding of the Constitution’s “first freedom” leads. Starting in 2006, branches of Catholic Charities USA around the nation had to choose between violating their institutional consciences by placing children with unmarried and same-sex couples or losing their government contract—without which they would shut down. In Boston, San Francisco, Washington, D.C., and Springfield, Ill., the adoption agencies indeed closed their doors. Today, there are activists and politicians who would gladly see Christian universities with traditional morality codes or Catholic hospitals that refuse to perform abortions suffer the same fate.

But if Catholics are to make a full-throated defense of robust religious liberty, we should also acknowledge the ways the church itself has contributed to the atmosphere of distrust around this cause. Asserting religious liberty primarily on “culture war” issues draws attention only to the church’s policing of moral lines, to the detriment of its proclamation of the good news and service to those in need.

For generations, the church in the United States has provided succor and support for millions of Americans, regardless of religion. This is not a historical accident but the result of the good works of myriad Catholics and an American context that allows believers to freely practice their faith in all spheres. This tradition must continue.

The Editors
Show Comments (
5
)
Comments are automatically closed two weeks after an article's initial publication. See our comments policy for more.
Tom Poelker
5 years 2 months ago
The editors have failed to note the difference between civil and religious spheres. While Americans are entitled to their religious beliefs and practices and moral codes, in the public sphere, they are not entitled to impose them on others. Belief in the inferiority of Negroes does not entitle one to discriminate against them in legal or commercial rules. Belief that all marriage must be heterosexual does not entitle one to enforce that belief on others when significant legal rights are attached to marital status, nor to deny children homes which are otherwise beneficial to them because one objects to the adult relationships in that home. Unless the physical parents have placed a condition upon the agency that the child be raised as a Catholic, the agency has no basis for demanding Catholic conditions. In the civil sphere, all people have a right to equal treatment under the law, even if others think their behavior is immoral. Civil governments cannot successfully the impose the legislation of the morality of a minority upon the rest of society without generating massive disrespect and evasion of the law. Permitting others to make their own moral choices is fundamental to the Catholic concept of conscience. So long as Catholic institutions hire and sell services to non-Catholics, they are fully participating in civil society and must not interfere with the consciences of others. Catholics are free to argue for and promote their moral positions, but not to restrict the freedom of others to act from their own moral conclusions.
Richard Booth
5 years 2 months ago
As the prior person has mentioned in his response, you appear to be unable to comprehend that we live in at least two worlds: the world of the secular and the world of religious belief. Both are based on their various principles and philosophies and both have a right to express their opinions. However, there is only one of these that represents all of the people, and that is not the world of religion. The millions of people you mention do not constitute a formally and legally sanctioned governing body that must attempt to meet the needs of everyone. If people of religion do not wish to recognize the legal marriage of two same-sex persons, they do not have to - except when it comes to abiding by civil law. I want to note that sometimes a phrase such as "religious liberty" can and does mask underlying biases. Even the Church has been guilty of talking love and acceptance while treating some minority groups very badly. No one must accept civil authority but they must pay the price of violating the law if they do not. No one is forcing the Church to accept homosexual marriage, contraception, or abortion; members who believe in the Church's teaching simply must abstain from these practices. The issue of so-called religious liberty has been vastly overblown. Finally, you write: "For generations, the church in the United States has provided succor and support for millions of Americans, regardless of religion. This is not a historical accident but the result of the good works of myriad Catholics and an American context that allows believers to freely practice their faith in all spheres. This tradition must continue." Despite the fact that this notion has little to do with your central argument, are you suggesting the tradition to which you refer will not continue if civil authority creates laws religion disagrees with? The Church has outlasted worse than perceived threats to religious liberty and I fail to see its doom any time in the near future.
Jim MacGregor
5 years 2 months ago
Richard, Your phrase "the world of the secular and the world of religious belief" seems to separate the realm and government of God and the realm and government of His earthly governments. Lutherans like to trace this idea back to Augustine and Aquinas, but I have difficulty "digging" it our of their writings. Anybody, any reading suggestions? jim macgregor
Richard Booth
5 years 2 months ago
James...I would not consider either religion or human government of God's direct making. This may be our primary area of disagreement. Man created religion (though, he did not create God) and his own earthly systems of government. Both are human endeavors and, as such, both subject to error. Personally, I would look to both Aristotle and Plato, who had their ideas about governing. Since Augustine made a number of Plato's idea Christian as Aquinas did for Aristotle, I would look to both. Have you tried Plato's "Republic" or "Nicomachean Ethics" or "Politics" by Aristotle?
William Rydberg
5 years 2 months ago
Is America in agreement with the Chair? If so it is incumbent upon America Magazine to reprint what was said verbatim then explain why. Please consider the source and dismiss it. One asks, does one sift through the rotting carcass of work Chaired by a person who attacks people of good will with such intemperate force, for what noble purpose? Demand a new FAIR Study! Ignore this timorous Bishop, for it is frightening to think somebody like that has not the intestinal fortitude as well as the smarts to deal with the not too distant future aftermath likely culminating in unjust jail fines and incarceration should legislation be attached to this biased stuff in my opinion. A Bishops' role I thought was to Shepherd, not negotiate with a biased Chair. Archbishop Lori also happens to be the equivalent in other Countries to the USA's Primate. He really needs to bring us Justice, not fancy words. Shaming doesn't work. America magazine really ought to sponsor a campaign to Demand a new FAIR Study with strong Catholic Representation. In my opinion... in Christ,