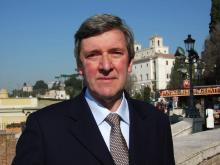 Pope Francis’ second visit to Asia (Jan. 12 to 19)—to Sri Lanka and the Philippines—is about to take place as I write. I am one of some 70 reporters accompanying him and will report for America. Here I wish to simply highlight some similarities and differences between the two countries, from the religious and political perspectives, and to frame some of the challenges Francis will face.

The Philippines, with 7,000 islands and 100 million inhabitants, is the dynamic Catholic hub of Asia and home to over 50 percent of Asia’s 140 million Catholics. Seventy-nine percent of Filipinos are Catholics; 10 percent belong to other Christian communities; and 11 percent are Muslims.

“Mercy and compassion” is the logo for Francis’ visit here, a reminder that he is coming primarily to comfort survivors and relatives of the victims of Typhoon Haiyan and the 4 million Filipinos it left homeless in 2013. He will also console those hit by recent earthquakes. His heart is taking him to this place of intense human suffering, which at times verges on despair. He wants to embrace people here personally and to give hope.

Many hope that after helping broker the United States-Cuba accord, Pope Francis can have an impact on the stalled negotiations to end the 46-year armed conflict between the Communist Party and the Philippine government. Both sides accepted a Christmas cease-fire that includes the time of his visit.

In the Philippines he will see the deep divide between the rich (a number of very rich families who hold political and economic power, most of them educated in the best Catholic schools) and the poor, who are the vast majority. Many wonder why the church’s social teaching has failed to take root in the hearts and minds of most of the rich and powerful of this Catholic nation, and why corruption has thrived in its political and economic arenas. It will be interesting to see how Francis addresses this reality.

Corruption at the top of the political and economic sectors is not unique to the Philippines; it exists also in Sri Lanka, a beautiful island with 21 million people, known as “the pearl of the Indian ocean.” Seventy percent of the population are Buddhist, 13 percent Hindu, 10 percent Muslim and 7 percent Christian (including 1.5 million Catholics).

The cardinal archbishop of Colombo, Malcolm Ranjith, is a close friend of the country’s president, Mahinda Rajapaksa, a Buddhist, and his family—far too close, say many local Catholics. He invited Benedict XVI to come and bless a new Asian theological institute, but Francis is coming instead to canonize the country’s first saint, Blessed Joseph Vaz, a 17th-century missionary priest, and to comfort the victims of the 25-year conflict that ended in 2009 and to promote reconciliation.

In recent decades the Philippines and Sri Lanka have seen many of their citizens emigrate because of poverty and, in Sri Lanka’s case, also because of the 25-year armed conflict between the Tamil Tigers and government forces.

Millions of Filipinos work overseas today, as do an estimated 1.5 percent of Sri Lanka’s population. Moreover, Sri Lanka has hundreds of thousands of displaced persons because of the conflict that left some 100,000 dead—mostly Tamils. That conflict ended in such a brutal manner that the United Nations opened an investigation into war crimes and crimes against humanity, but Rajapaksa’s government refuses to cooperate.

Most of Sri Lanka’s Tamils feel they are second class citizens. Francis is expected to address this situation and call for respect for their human rights and reconciliation when he visits the Marian shrine of Mahdu in the former war zone.

Francis is the third pope to visit both countries and, of course, their churches, which in different ways are “bridge churches.” Sri Lanka’s church is home to both Sinhalese and Tamils, while the dynamic Filipino church is a bridge to China and Myanmar and provides assistance to other Asian churches. Francis will want to support and encourage all this and also promote dialogue between the religions in both countries.

While the Philippine president declared four days of national holiday for Pope Francis’ visit, Sri Lanka’s president took the controversial decision to hold elections five days before his arrival, seeking a third term in office. Though the aftermath of past elections was marred by violence, Sri Lankan Catholics are hoping peace will prevail this time, when Pope Francis comes.