Food Aid for Whom? 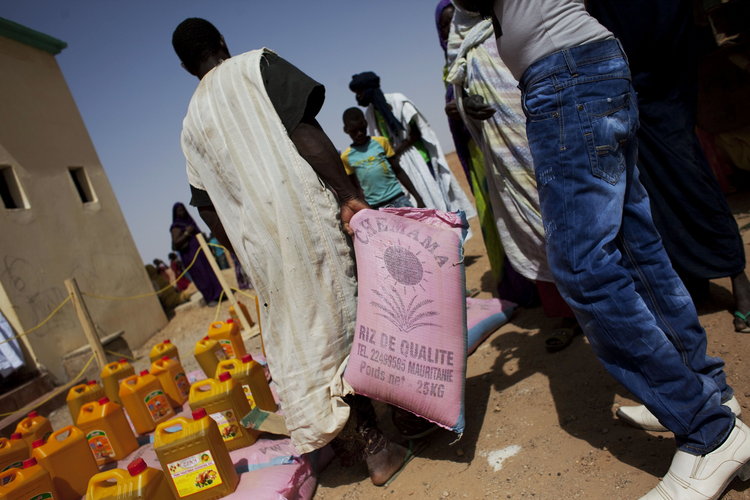 Through its signature Food for Peace Program, each year the United States sends about $1.4 billion in emergency food aid to hungry people around the world. The United States has saved the lives of millions of people with such assistance, and it could save millions more. Unfortunately, much-needed reforms in the way food aid is delivered that would reduce costs and improve effectiveness may be thwarted in Congress.

Under current law, practically all the food distributed as aid through the U.S. Agency for International Development is produced in the United States and then shipped overseas. The current process is deeply wasteful. According to a study done by the American Jewish World Service and Oxfam, nearly 55 percent of the program’s total expenditure goes not to acquire foodstuffs but to ship them. Resources that could be devoted to more anti-hunger efforts are being spent on transporting tons of U.S.-produced commodities. This enriches transport companies but shortchanges the hungry. One is tempted to ask: Who is “aided” the most when food is delivered in this manner, the victims of hunger crises or U.S. shipping and agricultural concerns?

In his proposed 2014 budget, President Obama hopes to introduce changes that have long been sought by advocates on the front lines of hunger disasters, including Catholic Relief Services. The president has called for creating greater flexibility and alacrity in the way food for aid is acquired by allowing as much as 45 percent of future aid to be sourced locally—that is, in or near the nation for which the aid is intended. According to a U.S.A.I.D. study, local procurement could allow the agency to reach as many as two to four million more hungry people each year without increasing expenditures.

The president’s reforms also seek to end another controversial practice, known as food aid “monetization.” According to that process, commodities produced in the United States—rice, vegetable oil, flour, dry beans and more—are acquired by U.S.A.I.D., donated or sold at reduced cost to relief and development agencies, shipped overseas and then sold by these agencies as a way to relieve hunger and to raise funds for their development efforts. That model has frustrated aid experts for years. It is plainly wasteful. The U.S. Government Accountability Office reported in 2011 that U.S.A.I.D. squanders by monetization about 24 cents of each dollar it spends. Worse, when relief agencies monetize aid, some worry that they are participating in a process that risks weakening or obliterating local food production systems. This diminishes local and regional food self-sustainability and, perversely, sets the stage for the next hunger crisis.

The roster of supporters of the president’s proposals reads like a Who’s Who of the nation’s leading disaster and development organizations. In addition to C.R.S., the list includes Mercy Corps, CARE, Oxfam America, Bread for the World and more. C.R.S. has long advocated cash funding of food aid programs and local procurement. While supporting these reforms, C.R.S. officials also stress the importance of authorizing legislation that sets these reforms in congressional stone. These experts in hunger relief do not want programmatic reforms to become a political football each year when the federal budget comes up for review. They advocate reforms that will eliminate uncertainty and allow relief and development specialists to develop dependable, long-term strategies to reduce global hunger.

At a time when deficit hawks presumably intend to squeeze as much waste and inefficiency out of the federal budget as possible, this restructuring of food aid would seem to be a no-brainer, but the proposal has already drawn determined resistance from major agricultural states, where corporate lobbyists have long nurtured fields of influence. Worth noting is the budgetary size of the issue. Food aid represents about a quarter of 1 percent of the U.S. budget, and the total dollar value of all aid is approximately 0.75 percent of total annual U.S. agricultural sales. The Book of Leviticus calls us to leave the edges and gleanings of the fields for those in need (19:9-10), yet even this tiny percentage of wealth and sustenance intended for the world’s poorest people is being vigorously pursued by U.S. agricultural and shipping interests.

Only a few lawmakers have gone on the record supporting the president’s proposals, and various campaigns to water them down or spike them completely have begun in Congress. It would be a tragedy if these eminently reasonable improvements are unable to survive the lobbyists’ gauntlet in Washington. It is up to the American people, in solidarity with the truly needy people in the world, to urge Congress to find a way to implement these fiscally and morally responsible reforms.

The Editors
Show Comments (
4
)
Comments are automatically closed two weeks after an article's initial publication. See our comments policy for more.
Joseph J Dunn
8 years 2 months ago
I know little about the U.S. food aid program, and so I am inclined to accept the recommendations of C.R.S. and the other organizations with long experience in this effort. But the Editors will no doubt note some irony in the recommendation that more of this emergency food be locally sourced from countries in or near the area where aid is needed. That would save shipping costs, the savings being used to buy more food. It would also, the Editors acknowledge, reduce the amount of rice, vegetable oil, dry beans and other foods grown and processed in the U.S., which would reduce employment here while growing or maintaining jobs overseas. If that process of local sourcing makes sense in this instance, why is it so vehemently opposed as "globalization" or "outsourcing" when practiced by corporations producing other consumer goods?
DENNIS CALLIES
8 years 1 month ago
Apparently a call for this reform is heard periodically. The New York Times featured an article "Poverty Memo; African Food for Africa's Starving Is Roadblocked in Congress," by CELIA W. DUGGER, October 12, 2005. According to that article CRS was listed first among the relief agencies opposed to reforming legislation. It was CARE USA which led the chorus for the change your editorial is now advocating. CARE studied the relief system and issued a White Paper on Food Aid Policy on June 6, 2006. While CRS is "big man on campus," it was hardly a leader in this matter. There was too much money involved.
JOE BLISS
8 years 1 month ago
There has been a great deal of opposition to this bill from all sides with little success.You mentioned President Obama's attempted change in his 2014 Budget . Changes were also requested by President Bush in 2005 and 2008 budgets.John Bolten,republican, and John Podesta,democrat, stated their objection in WSJ op-ed. One area is to direct payments directly overseas and not to corporate farms in the USA. This would allow these farmers to compete in sale of their farm products . I
daniel macia
7 years ago
The Congress should find a solution for the Food for Peace Program, I helped numerous times such organizations and it would be a pity if this would stop. I met a lot of great people that also made donations and with a couple of them I became very close, just recently I found out about single cup coffee pods from my friend and I want to give it a try.