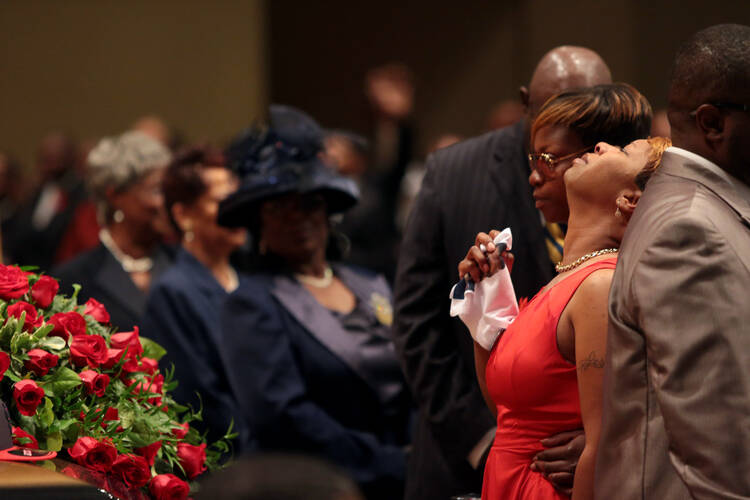 The fatal shooting by Darren Wilson, a white police officer, in Ferguson, Mo., of Michael Brown, an unarmed black teenager, was followed by protests, confrontations, curfews and arrests. For days after the young man’s death, photos of clouds of tear gas, police in riot gear and looters ravaging storefronts dominated newspapers and Twitter feeds. Although these events are important to understanding this ongoing story, perhaps more crucial are the events that preceded them.

Michael Brown’s death did not occur in a vacuum but within the context of our nation’s history of racial conflict and inequality, both personal and systemic. On Aug. 18, President Obama said that when it comes to addressing racism in the United States, “we’ve made extraordinary progress, but we have not made enough progress.” Our society remains one in which many black parents feel compelled to sit down with their sons and warn them of how they may be perceived simply because they are young black men. It is a nation in which, according to the Department of Justice, black Americans make up 13 percent of the general population and 38 percent of the prison population. And in Ferguson, a place where blacks make up 67 percent of the city population but as few as three members of the 53-member police force.

The establishment of trust and mutual respect among all citizens is crucial to making progress toward a more civil and equal society. But trust has been hard to find in the aftermath of Ferguson. Many have interpreted the shooting as racially motivated. Others have argued that Officer Wilson responded in self-defense. The situation, at this writing, leaves many important questions of safety and motivation unanswered. Yet some are skeptical that a just resolution will be found: A recent Pew survey revealed that 76 percent of black respondents had “not too much” confidence or “none at all” in the investigations of the shooting.

In a healthy community, civilians should be encouraged to view the police force as a group of men and women who are part of a community and seek to serve and protect that community. And law enforcement officials should work in a way that is respectful of that relationship and worthy of that trust. In many places they do.

But there is widespread concern among citizens about another aspect of the police response in Ferguson. Photographs of police officers wearing camouflage and holding military-style weapons as they confront protesters reveal a disconcerting trend toward the militarization of America’s police forces, one that extends beyond Ferguson’s city limits. Since 2011, the federal government has awarded over $34 billion in grants to police departments to purchase military equipment.

While police deserve and require effective and sufficient protection, military gear frequently is unnecessary or even dangerous when used in American cities and suburbs. In addition, the use of this equipment evokes a sense of combat rather than crowd control. Military equipment and tactics, when used by police, can deepen the divide between law enforcement and the community. In places where the police force does not include significant representation from the demographic it serves, a military-style approach can aggravate pre-existing racial tensions as well. Police forces, particularly those that serve a large but politically excluded community, need to seriously re-evaluate tactics and training regarding community relations, traffic or field stops of local residents, crowd control and diversity-hiring to help ease these tensions.

Of course, it is not possible to heal decades of inequality and racial conflict with a single conversation or policy change. The thoughtful, ongoing dialogue that is necessary at all times, but especially following events like those in Ferguson, requires participation from the whole community. Social media have helped to raise awareness and to provide a sense of solidarity, but in some cases they have also facilitated the rapid dissemination of misinformation that can heighten rather than defuse tensions. Essential conversations must take place offline.

Religious leaders have a unique ability to help facilitate this communication. Archbishop Robert Carlson of St. Louis recently celebrated a Mass for peace and justice following Mr. Brown’s death and encouraged other parishes to do the same. He also has re-established the Human Rights Commission in the Archdiocese of St. Louis and pledged continued scholarship support to students in area Catholic schools. Catholic Family Services has offered counseling in the area, and parish collections helped support food pantries providing assistance to those affected by the looting.

If we hope to continue to make progress toward greater equality and understanding, this work and these conversations must continue long after the crowds disperse in Ferguson and “#ferguson” fades from our Twitter feeds.

The Editors
Show Comments (
1
)
Comments are automatically closed two weeks after an article's initial publication. See our comments policy for more.
E.Patrick Mosman
8 years 4 months ago
What lesson(s) should be taken from Ferguson? First a white police officer must not use physical force, up to using his weapon, on an 18 year old black thief/thug who may have assaulted the officer. Second, racebaiters, Sharpton, Jackson, new black panthers, now including the President and Attorney General, rioters who destroy private and public property without a single word of condemnation from Sharpton, et al. are attracted to such incidents like flies to cow pies and spread their version of the event without a single shred of evidence. Third, blacks killing whites or blacks do not draw Sharpton and his followers . Fourth, the MSM covered Ferguson from a biased point of view and will continue to do so when Sharpton and Jackson summon them. “I am the attorney general of the United States,” Holder told a group of local college students. “But I am also a black man.” Any chance that a white policeman will get a fair hearing? While the press and other rabble rousers are focusing on what Officer Wilson knew or did not know, both Mr Brown and his sidekick "Hands up Don't shoot" buddy knew that they had just committed a crime and the buddy reportedly had a warrant out for his arrest when Officer Brown attempted to stop them from walking down the middle of the street. This knowledge may have led to the initial confrontation between Officer Wilson and Brown and Brown's ultimate death. Headlines for a past weekend in New York City and Chicago 15 shot in NYC within 8 hours, 2 dead Posted: Aug 17, 2014 7:39 PM EDT Updated: Aug 18, 2014 Seven Killed, 29 Wounded In City Shootings Over Weekend August 18, 2014 6:10 AM 42 Shootings in Chicago Since Friday; 6 Dead Include Toddler, 2 Teens August 25, 2014 - 10:08 AM No mention of race even though 2 of the killings were by police. http://cnsnews.com/news/article/cnsnewscom-staff/42-shootings-chicago-friday-6-dead-include-toddler-2-teens Where are Sharpton,Jackson,the "No Justice No Peace marchers and the rioters? Where is the Attorney General? And what is reported when a black officer kills an unarmed white/Hispanic? http://www.wnd.com/2014/08/bla... Little or nothing!