The First Five Years: How the church can support young priests in a secular age 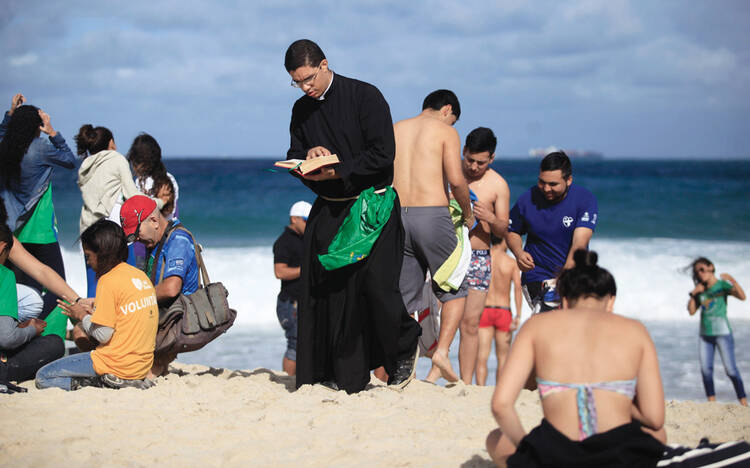 Every so often a rumor arises that young priests today are not faring well. It is suggested that they are dispirited and leaving the priesthood in large numbers. In 1999, this rumor was so rife that the Catholic sociologist Dean Hoge led a research project to investigate. Dr. Hoge concluded in his study The First Five Years of the Priesthood, published in 2002, that it was not possible to determine the exact resignation rate of priests in their first five years of priesthood, but he estimated it to be between 10 percent and 12 percent, much lower than expected.

In these days of reduced numbers of priests, every loss is particularly painful. But my own professional experience and my research, which was compiled in Why Priests are Happy: A Study of the Psychological and Spiritual Health of Priests (Ave Maria Press), suggests that young priests today are happier, more optimistic about the priesthood, accepting of Catholic teaching and personally committed to priestly celibacy than the cohort before them.

Therefore, the first question we might ask ourselves is not “What we are doing wrong in forming and supporting our new priests today?” but “What are we doing right?” Why are most young priests happy and prospering in the priesthood? Indeed, there is much to commend the quality of seminary education today. Seminary faculties are well trained, dedicated and faithful to the church, even as they face challenges. There is also much greater emphasis on pastoral preparedness, including stronger human formation programs.

Nevertheless, these positive findings should not leave us complacent. The first five years of priesthood present unique challenges to the men adjusting to life after ordination. More important, the context of ministry today is changing rapidly and profoundly. The challenges facing priests today are much different than they were only a few decades ago. Formation and support for priests in ministry must focus more intently on these contextual changes and must make significant adjustments.

Two of these profound changes are secularization and decreasing numbers. While we are all familiar with these changes, I believe we do not fully recognize their import and their consequent impact on formation and priestly support. While the sacrament of priesthood is unchanging, the experience of priesthood is radically changing.

Cardinal Donald Wuerl of the Archdiocese of Washington often speaks of a “tsunami of secularization” sweeping our country. It is impossible to overemphasize how this tidal wave is shifting the lived experience of priesthood. The happy images of priesthood, though certainly idealized in movies like “The Bells of St. Mary’s” and “Going My Way” in the 1940s, have been supplanted by images of priests as deviant, unhappy and members of an anachronistic era of faith—a perception fueled by the crisis of sexual abuse of children by clerics. I believe, however, that these distorted images are most fundamentally the result of a growing gulf between the Christian faith and the secular culture.

The entire climate that surrounds a person choosing the Catholic priesthood and ministering in the church today is changing. A short 50 years ago, if a young man stood up and declared his intention to become a priest, the response was likely to be one of admiration and support, even in the larger culture. Today, responses too frequently range from disbelief to actively discouraging the young man.

Should a young man still choose to become ordained, his first years of priesthood will surely be a challenge. Walking down the street wearing a Roman collar today evokes strong emotions from some passersby. For many others who have long since stopped asking spiritual questions, the priest is seen as an oddity or simply ignored. As humiliating and disheartening as it is to read stories of clerical misconduct, the “tsunami” of indifference may ultimately leave its own wake of destruction.

The second change that profoundly affects the lives of priests today is the reduced number of priests. Many priests are now responsible for two, three or even more parishes. But the full impact of declining numbers is yet to come. One of the things that has been shielding us from the drastic impact of fewer priests is the dedication of older priests. In my diocese there are over 30 priests beyond retirement age who still voluntarily participate in full-time ministry. Some are even in their 80s. When these generous men soon retire, the full impact of our reduced ranks will be felt.

Already young priests are beginning to shoulder the weight. When I was ordained almost 30 years ago, a priest ordinarily did not become a pastor until he had celebrated his silver jubilee. Today, it might happen in two or three years. The newly ordained are now not only adjusting to priesthood, celibacy and ministry; they are also adjusting to becoming leaders of parishes, with all the attendant administrative, leadership and management challenges.

In Need of Support

Although research suggests that burnout rates among priests are generally low and that the vast majority of priests are happy, the youngest priests are more likely to be overwhelmed and in need of support. With these new demands upon priests come new requirements in priestly formation and support. Initially, three come to mind: a personally integrated faith, a masculine spirituality and a strong personal support network.

A personally integrated faith. Perhaps what is most needed and truly demanded in ministering in a secular age is a strong, integrated faith. The daily assaults on a priest’s faith are relentless, and many of these challenges are also experienced by the lay faithful. A young priest must face secularism head-on and hold his ground. His beliefs cannot be simply a regurgitation of theological phrases that he read in a book. He must know the faith and internalize it in his own life, using the language and culture of today.

When we say, for example, that Jesus Christ is our savior, the secular response is likely to be, “He saved us from what?” If the priest responds, “Sin,” then the next secular question might typically be: “What sin? I have done nothing wrong.” Then the real discussion, perhaps evangelization, begins.

Most Americans still believe in God, but many, including some Catholics, have drifted into a collage of ideas that are not compatible with our faith and tradition or present half-truths. It is not uncommon to hear statements like, “I’m spiritual but not religious.” “I don’t do holy days.” “Why should I go to confession? I confess to God directly.” “Why do I need to go to Mass every week when I find God in nature?” “Jesus was a holy man, but so was Gandhi.” The young priest who cannot convincingly, sincerely and compassionately respond to such typical comments might not only find himself an ineffective teacher of the faith, but also having his own faith shaken. Can we help seminarians and young priests to integrate their faith and give them the tools to evangelize in our increasingly secular culture?

A masculine spirituality. When speaking of a masculine spirituality, I am not referring to something that is the sole province of men. Rather, psychologists like Sandra Bem speak of masculine and feminine characteristics that both men and women potentially possess. Among “feminine” characteristics Dr. Bem would include traits like compassion, warmth and sensitivity. These qualities are obviously essential for every priest.

In my own study of 115 priests, respondents were given a list of Bem’s “masculine” and “feminine” traits and then asked to rank in order the most important traits to possess. The first nine chosen by the respondents were feminine traits; the masculine traits were clearly less preferable to the priests. But in this increasingly secular age, many of Bem’s “masculine” traits are becoming more essential for priests, like “willing to take a stand,” “defends own beliefs,” “willing to take risks,” “assertive” and “acts as a leader.”

Lay men and women in the church should, of course, exhibit such traits, but it is important for the sake of evangelization that young priests also take these qualities to heart. Without such characteristics, young priests might be tempted to withdraw, trying only to conserve the faith of those who are left in their pews. Such a passive and defensive posture is doomed to slow erosion and eventual failure.

Rather, what is needed is a bold, new proclamation of the faith, that is, the new evangelization. Pope Francis, in the now celebrated words from his homily on Holy Thursday 2013, urged us “to go out...to the outskirts” to get “the odor of the sheep” on us. Far from being passive, his clarion call demands a bold, assertive faith, without becoming judgmental or lacking respect for others. Are we helping our new priests not only to have important “feminine” qualities, but also to internalize a “masculine” spirituality? Will they be bold proclaimers of the faith, or will they sit in their rectories as their congregations slowly dwindle?

A strong personal support network. A personal challenge to all who minister in a secular environment is the temptation to feel unwanted, ignored and/or unsupported. Diocesan priests are becoming more akin to missionaries, being sent to largely uncatechized and sometimes unsupportive environments. Being part of a supportive community of faith has been an important part of what helps our priests prosper, especially diocesan priests. It has been an integral part of their very spirituality.

Today there are fewer priests, and they are more isolated from each other, with increasing workloads. Formerly, there were often several priests living in the same rectory. Now one priest may have two or three rectories to himself as he rotates from one parish to the next. The tendency will be to overwork and become isolated. Mixing isolation, overwork and a lack of support is a recipe for personal disaster. Such situations make priests more susceptible to loneliness and separation and sometimes to the temptations all too prevalent in our sexually addicted society. To make matters more difficult, a priest’s celibate commitment is increasingly viewed with suspicion, and this affords him less external support for his celibate lifestyle. More than ever, the fraternity of priests must be fostered. More than ever, communities of faith must support their priests. A priest is assigned to a parish to love and nourish the faith of the people. But it is also their love and faith that sustains him.

No matter the size of our faith communities, their importance in our society remains. Each becomes an oasis in a spiritually desiccating world. We ought to help our new priests develop the tools and opportunities to build the fraternity of the priesthood. Our new priests must also learn to build and find support from the many committed lay people and religious in these communities of faith.

The lived experience of priesthood is changing dramatically before our eyes. The priesthood for which we are preparing men today is not the priesthood of the past. We as church must form and help the new cohort to thrive in this radically new and challenging reality. Having worked in priestly formation and witnessed their strength, I am confident that these new men, with our support, will be up to the task. 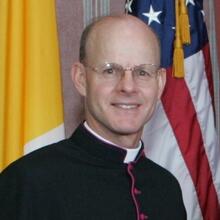 Msgr. Stephen J. Rossetti is a priest of the Diocese of Syracuse, a clinical associate professor at the Catholic University of America and the president of Saint Luke Institute, a Catholic education and treatment center that primarily serves clergy and men and women religious. This article is based on a talk presented at an international symposium titled The Training of Priests Today, held on June 2–5, 2013, at Laval University in Quebec.