The Story of a Soul: Fate and forgiveness in ‘Les Misérables’

The Story of a Soul: Fate and forgiveness in ‘Les Misérables’ 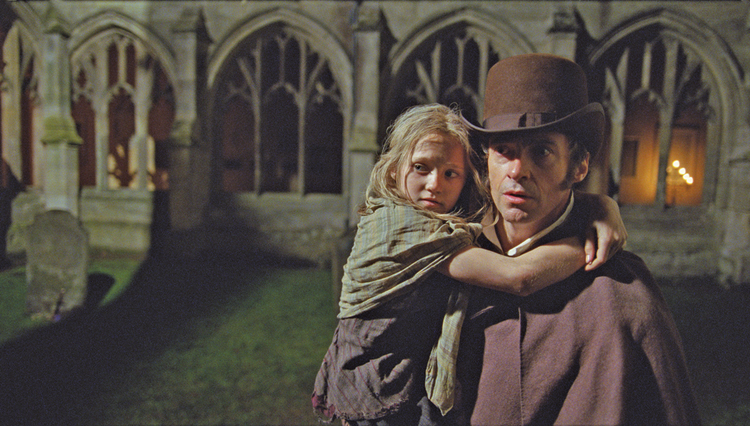 Les Misérables arrives in theaters this Christmas bearing a distinguished lineage as one of the most beloved novels and certainly one of the most popular theatrical musicals of all time. Since the English-language adaptation premiered in London in 1985, it has played to over 60 million theatergoers around the world. Its Broadway production ran for 16 years, and its various touring companies traveled the country for 18 years. The Hollywood version seems long overdue. Under the direction of Tom Hooper, an Academy Award winner for “The King’s Speech,” the film dares to retain its sung-through structure with almost every bit of dialogue set to music and every scene lavishly visualized.

Hollywood has successfully adapted many a popular Broadway musical—think of the splendor of “The King and I,” the energy and romance of “West Side Story,” the wit and glamour of “My Fair Lady,” the sentimental charm of “The Sound of Music” and the cynical sass of “Chicago”—in many cases even garnering Oscars for best film. Will this musical adaptation of such a beloved novel and theatrical phenomenon work the same magic for moviegoers? Maybe. Or, for various reasons, maybe not.
The story is built around the heroic Jean Valjean, who, after 19 years in prison for stealing a loaf of bread, is finally released on parole. In his first night of freedom, he steals silver objects from a kindly bishop who has provided him with a place to stay. When he is caught and doomed to return to prison for his crime, the bishop saves him by telling the gendarmerie that he had given Valjean the silver. This generous act transforms the embittered Valjean and prompts him to dedicate the rest of his life to similar acts of mercy and kindness to the poor. In the course of the film, he saves one of his factory workers, Fantine, from a prison sentence; adopts and raises her illegitimate daughter, Cosette; saves the life of Cosette’s lover, Marius; and even manages to forgive his nemesis, the police official, Javert.
The film boasts some all-star casting. Moviegovers who know Hugh Hackman only as Wolverine in the “X-Men” films or Anne Hathaway as Catwoman in­ “The Dark Knight Rises” should be pleasantly surprised by their impressive musical talent. Jackman, who appears in almost every scene of the film, even rises to the vocal demands of the double-octave prayer, “Bring Him Home.” Amanda Seyfried, who made a charming musical-film debut a couple of years ago in “Mamma Mia,” is a lovely and lyrical Cosette. Eddie Redmayne, who attracted attention last year as the shy companion of Marilyn Monroe in “My Week With Marilyn,” delivers a far more passionate dramatic and musical performance as the revolutionary leader and lovelorn hero, Marius—especially in his lament for his fallen comrades in the song “Empty Chairs at Empty Tables.” Samantha Banks, a newcomer in the relatively minor role of Eponine, the unrequited lover, offers a heartbreaking rendition of the ballad “On My Own.” Another newcomer, Aaron Tveit, brings passion and pathos as Marius’s companion in leading the student revolt.
The decision to have the performers sing directly on camera rather than lip-synch to their recorded performances enhances every musical number. This is especially effective in Hathaway’s anguished delivery of “I Dreamed a Dream,” filmed in one take, which creates an intimacy between the actress and the audience that is usually achieved only in a live stage performance. Only Russell Crowe, as Javert, the official who obsessively pursues Valjean because he broke his prison parole, is disappointing. With none of the passion and complexity he brought to his characters in “A Beautiful Mind” and “Gladiator,” Crowe’s performance is dramatically understated and musically reserved.
The lush orchestrations add to the intensity of every number, especially the revolutionary anthems, “One Day More” and “Do You Hear the People Sing?” The major musical moments, however, are in danger of being buried in the sung-through structure of the film, with most of the dialogue, even the most conversational lines, set to music. Opera lovers are accustomed to continuous recitative between arias and chorus numbers; film audiences are not. They might welcome more moments of spoken conversation. Many of the musical numbers tend to blend into a vague mix of passion, anger, rebellion and piety. Most of the musical numbers are filmed with tight close-ups of the actor singing directly into the camera. This creates a certain sameness of mood and sentiment throughout. The only major departure from the pattern comes in “Master of the House,” the jaunty ballad of the disreputable innkeepers, Monsieur and Madame Thenardier. Sacha Baron Cohen and Helena Bonham Carter make the most of their grotesque characters, but as the only bit of comic relief in the grim narrative, their appearances seem out of place.
In general, while “Les  Misérables” obviously has inspired millions of people through its portrayal of courageous resistance to injustice, forgiveness instead of revenge and sympathy for the downtrodden, little background is provided for the various episodes (explained more fully, of course, in the 1,500 pages of Victor Hugo’s novel). As it stands, the film offers very little explanation for Javert’s decision, in his relentless devotion to justice, to focus on Valjean; nor does it make clear how Valjean managed to become a factory owner and mayor of a provincial town. Is it fate or coincidence that causes Javert to keep appearing in Valjean’s life? What specific injustices prompted the student uprising that comprises the second half of the narrative?
The audience may not worry about such details and will be carried away by the film’s visual excitement and heartrending songs. Maybe the  faults of this version of “Les  Misérables”—like the theft of the bishop’s silver—will be forgiven.
Show Comments (
1
)
Comments are automatically closed two weeks after an article's initial publication. See our comments policy for more.
David Pasinski
7 years 7 months ago
Perhaps I am too devoted to the stage version after seeing it five times in various venues (each excellent on its own level), but this movie version- despite its many strengths - is sadly, somewhat disappointing. I'm stuck on the music from the stage version and to hear many of the pieces - especially some of the "dialogue" - truncated, is a real disappointment. And "One Day MoOre" and te final scene, do not have the transcendent magic as the stage version. For those who hav not seen it and do not have images of a more world-weary Valjean or a mmore obsessive Javert, this wll do and the music is still wonderful, but I am among those who are still too stage-struck...
Advertisement
Advertisement